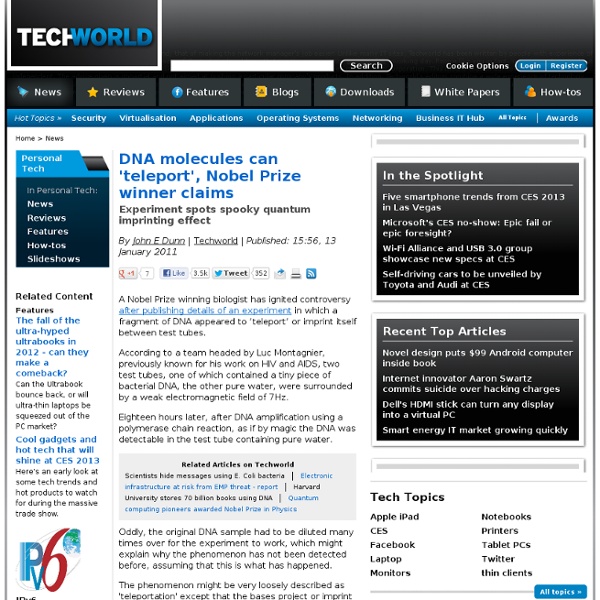 A Nobel Prize winning biologist has ignited controversy after publishing details of an experiment in which a fragment of DNA appeared to ‘teleport’ or imprint itself between test tubes. According to a team headed by Luc Montagnier, previously known for his work on HIV and AIDS, two test tubes, one of which contained a tiny piece of bacterial DNA, the other pure water, were surrounded by a weak electromagnetic field of 7Hz. Eighteen hours later, after DNA amplification using a polymerase chain reaction, as if by magic the DNA was detectable in the test tube containing pure water. Oddly, the original DNA sample had to be diluted many times over for the experiment to work, which might explain why the phenomenon has not been detected before, assuming that this is what has happened. The phenomenon might be very loosely described as 'teleportation' except that the bases project or imprint themselves across space rather than simply moving from one place to another. What does all of this mean?

Related:  it's all in the mind • the theory of everything

Scientific Proof Thoughts & Intentions Create Physical Reality and How Advertisers Exploit This Gregg Prescott, M.S., In5D Guest Waking Times Any reputable scientific experiment should be replicable under similar conditions. When Dr. Masaru Emoto proved that thoughts and intentions create reality, the experiment has been replicated numerous times with similar results. Does DNA Emit Light? Dan Eden for viewzone.com An incredible story! I get lots of suggestions for stories, and I really appreciate them. But some of them are too good to be true. An example of this was a story of a giant human skeleton -- maybe 40 feet tall -- that was discovered by a Russian archaeological team. The story had photos and links accompanying it and looked promising.

Practical Physics This website is for teachers of physics in schools and colleges. It is a collection of experiments that demonstrate a wide range of physical concepts and processes. Some of the experiments can be used as starting-points for investigations or for enhancement activities. Many have links to carefully selected further reading and all include information and guidance for technicians. Physics is a practical science. How "SuperAger" Brains Are Different Than Everyone Else's Researchers working with SuperAgers—people aged 80 and up with impeccable memory—reveal how their brains look decades younger. And compared to others their age, SuperAgers have nearly 90 percent fewer brain “tangles” linked to Alzheimer’s disease. The findings were published in the Journal of Neuroscience last week. First identified in 2007, the so-called cognitive SuperAgers displayed memories as sharp as people 20 to 30 years younger than them. In a preliminary study, researchers found that a particular region of their cortex was thicker than that of middle-aged participants. Now, in a more detailed study, a Northwestern University team led by Tamar Gefen used MRI scans to image the brains of 31 SuperAgers, and they also conducted postmortem investigations with five who donated their brains to science.

Unusual quantum effect discovered in earliest stages of photosynthesis Quantum physics and plant biology seem like two branches of science that could not be more different, but surprisingly they may in fact be intimately tied. Researchers at the U.S. Department of Energy's (DOE) Argonne National Laboratory and the Notre Dame Radiation Laboratory at the University of Notre Dame used ultrafast spectroscopy to see what happens at the subatomic level during the very first stage of photosynthesis. "If you think of photosynthesis as a marathon, we're getting a snapshot of what a runner looks like just as he leaves the blocks," said Argonne biochemist David Tiede.

NASA Discovers Hidden Portals In Earth’s Magnetic Field Our planet has come a long way in scientific breakthroughs and discoveries. Mainstream science is beginning to discover new concepts of reality that have the potential to change our perception about our planet and the extraterrestrial environment that surrounds it forever. Star gates, wormholes, and portals have been the subject of conspiracy theories and theoretical physics for decades, but that is all coming to an end as we continue to grow in our understanding about the true nature of our reality. In physics, a wormhole was a hypothetical feature of space time that would be a shortcut through space-time. We often wonder how extraterrestrials could travel so far and this could be one of many explanations.

How brain waves guide memory formation Our brains generate a constant hum of activity: As neurons fire, they produce brain waves that oscillate at different frequencies. Long thought to be merely a byproduct of neuron activity, recent studies suggest that these waves may play a critical role in communication between different parts of the brain. A new study from MIT neuroscientists adds to that evidence. The researchers found that two brain regions that are key to learning — the hippocampus and the prefrontal cortex — use two different brain-wave frequencies to communicate as the brain learns to associate unrelated objects. Whenever the brain correctly links the objects, the waves oscillate at a higher frequency, called “beta,” and when the guess is incorrect, the waves oscillate at a lower “theta” frequency.

Proof That the Human Body is a Projection of Consciousness Brandon West, ContributorWaking Times In this article we will explore how your body is a holographic projection of your consciousness, and how you directly influence that hologram and thus have complete control over the physical health of your body. We will also specifically explore the exact mechanism behind this principle, and don’t worry, I will provide scientific evidence so let your rational mind be at ease. But first … how is this even possible? Human Thought Determines Reality One of the key principles of quantum physics is that our thoughts determine reality.

Candler's Classroom Connections Sign Up "I have spent the past few days looking at your site and enjoying your past and current newsletters. I feel like a kid in a candy store! Thanks so much for your hard work and your effort!" Higher Density Blog In5D.com. By now, pretty much all of us know and accept that meditation provides a plethora of benefits, including reduced tension and stress and improved focus and concentration. However, how and why meditation does this has long remained unknown—until now! Harvard University scientists have published the results of an 8-week study that used magnetic resonance imaging (MRI) to examine the effects of meditation on the brain. Participants in the study practiced forms of mindfulness meditation every day for approximately 30 minutes. Mindfulness is a meditation style that emphasizes maintaining an objective awareness of sensations, feelings and states of mind.

What is String Theory? For the past decade, physicists all over are focusing their attention on string theory. But what is string theory? A simple explanation to string theory is that it is the basic fundamental building block for everything. When all the matter in the universe is broken down to its most basic component, it will be tiny particles that look like strings; String Theory. Free Content Success Resources Check out this page for a sample of the best free resources I’ve developed to help you with your content branding and marketing online. Download Free Content Templates Get instant access to 5 easy to use plug and play article creation templates. Take the Share Your Stuff Online Mini Course