Quantum mechanics (QM – also known as quantum physics, or quantum theory) is a branch of physics which deals with physical phenomena at nanoscopic scales where the action is on the order of the Planck constant.

It departs from classical mechanics primarily at the quantum realm of atomic and subatomic length scales. Quantum mechanics provides a mathematical description of much of the dual particle-like and wave-like behavior and interactions of energy and matter. Quantum mechanics provides a substantially useful framework for many features of the modern periodic table of elements including the behavior of atoms during chemical bonding and has played a significant role in the development of many modern technologies.

In advanced topics of quantum mechanics, some of these behaviors are macroscopic (see macroscopic quantum phenomena) and emerge at only extreme (i.e., very low or very high) energies or temperatures (such as in the use of superconducting magnets). For example, the angular momentum of an electron bound to an atom or molecule is quantized. In contrast, the angular momentum of an unbound electron is not quantized. In the context of quantum mechanics, the wave–particle duality of energy and matter and the uncertainty principle provide a unified view of the behavior of photons, electrons, and other atomic-scale objects.

The mathematical formulations of quantum mechanics are abstract. A mathematical function, the wavefunction, provides information about the probability amplitude of position, momentum, and other physical properties of a particle. Mathematical manipulations of the wavefunction usually involve bra–ket notation which requires an understanding of complex numbers and linear functionals. The wavefunction formulation treats the particle as a quantum harmonic oscillator, and the mathematics is akin to that describing acoustic resonance. Many of the results of quantum mechanics are not easily visualized in terms of classical mechanics. For instance, in a quantum mechanical model the lowest energy state of a system, the ground state, is non-zero as opposed to a more "traditional" ground state with zero kinetic energy (all particles at rest). Instead of a traditional static, unchanging zero energy state, quantum mechanics allows for far more dynamic, chaotic possibilities, according to John Wheeler.

The earliest versions of quantum mechanics were formulated in the first decade of the 20th century. About this time, the atomic theory and the corpuscular theory of light (as updated by Einstein)[1] first came to be widely accepted as scientific fact; these latter theories can be viewed as quantum theories of matter and electromagnetic radiation, respectively. Early quantum theory was significantly reformulated in the mid-1920s by Werner Heisenberg, Max Born and Pascual Jordan, (matrix mechanics); Louis de Broglie and Erwin Schrödinger (wave mechanics); and Wolfgang Pauli and Satyendra Nath Bose (statistics of subatomic particles). 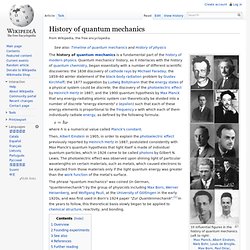 Left to right: Max Planck, Albert Einstein,Niels Bohr, Louis de Broglie,Max Born, Paul Dirac,Werner Heisenberg, Wolfgang Pauli,Erwin Schrödinger, Richard Feynman. The history of quantum mechanics is a fundamental part of the history of modern physics. Where h is a numerical value called Planck's constant. Then, Albert Einstein in 1905, in order to explain the photoelectric effect previously reported by Heinrich Hertz in 1887, postulated consistently with Max Planck's quantum hypothesis that light itself is made of individual quantum particles, which in 1926 came to be called photons by Gilbert N. Overview[edit] Ludwig Boltzmann's diagram of the I2 molecule proposed in 1898 showing the atomic "sensitive region" (α, β) of overlap. where: h is the Planck constant;

Timeline of quantum mechanics. From Wikipedia, the free encyclopedia This timeline of quantum mechanics shows the key steps, precursors and contributors to the development of quantum mechanics, quantum field theories and quantum chemistry.[1][2] 19th century[edit] 1859 – Gustav Kirchhoff introduces the concept of a blackbody and proves that its emission spectrum depends only on its temperature.[1]1860–1900 – Ludwig Eduard Boltzmann, James Clerk Maxwell and others develop the theory of statistical mechanics. 20th century[edit] 1900–1909[edit] 1910–1919[edit] A schematic diagram of the apparatus for Millikan's refined oil drop experiment. 1920–1929[edit] 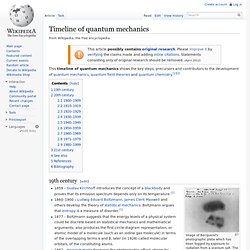 Overview. File:Bohr model 3.jpg. File:Boltzmanns-molecule.jpg. File:Feynmann Diagram Gluon Radiation.svg. Cancel Edit Delete Preview revert Text of the note (may include Wiki markup) Could not save your note (edit conflict or other problem). 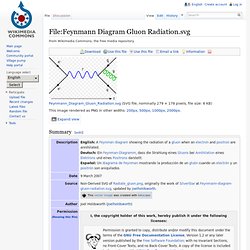