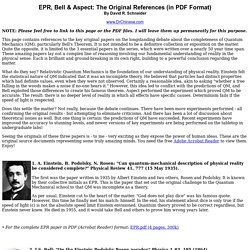 Schneider www.DrChinese.com NOTE: Please feel free to link to this page or the PDF files. I will leave them up permanently for this purpose. This page contains references to the key original papers on the longstanding debate about the completeness of Quantum Mechanics (QM), particularly Bell's Theorem. HyperPhysics Concepts. About HyperPhysics Rationale for Development HyperPhysics is an exploration environment for concepts in physics which employs concept maps and other linking strategies to facilitate smooth navigation.

For the most part, it is laid out in small segments or "cards", true to its original development in HyperCard. The entire environment is interconnected with thousands of links, reminiscent of a neural network. The bottom bar of each card contains links to major concept maps for divisions of physics, plus a "go back" feature to allow you to retrace the path of an exploration. 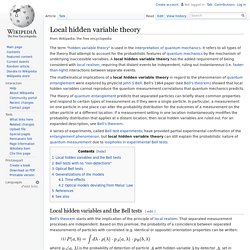 It refers to all types of the theory that attempt to account for the probabilistic features of quantum mechanics by the mechanism of underlying inaccessible variables. A local hidden variable theory has the added requirement of being consistent with local realism, requiring that distant events be independent, ruling out instantaneous (i.e. faster-than-light) interactions between separate events. The mathematical implications of a local hidden variable theory in regard to the phenomenon of quantum entanglement were explored by physicist John S Bell. 1508.05949. Entangled In the Past: “Experimental delayed-choice entanglement swapping” – Uncertain Principles. Enough slagging of beloved popularizers– how about some hard-core physics. 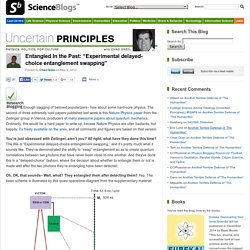 The second of three extremely cool papers published last week is this Nature Physics paper from the Zeilinger group in Vienna, producers of many awesome papers about quantum mechanics. Ordinarily, this would be a hard paper to write up, becase Nature Physics are utter bastards, but happily, it’s freely available on the arxiv, and all comments and figures are based on that version. You’re just obsessed with Zeilinger, aren’t you? All right, what have they done this time? The title is “Experimental delayed-choice entanglement swapping,” and it’s pretty much what it sounds like. Oh, OK, that sounds– Wait, what? The vertical axis represents time, moving into the future as you go up. Bell's Theorem with Easy Math. Bell's Theorem with Easy Math By David R. 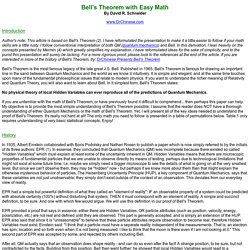 Schneider www.DrChinese.com IntroductionAuthor's note: This article is based on Bell's Theorem (2). I have reformulated the presentation to make it a little easier to follow if your math skills are a little rusty. I follow conventional interpretation of both QM (quantum mechanics) and Bell. Quantum Entanglement and Causality.

Faster than Light Travel. Holographic Universe. Quantum mechanics - Interference and which-path information. So, to be clear, my understanding of your setup is that you are doing SPDC in a noncollinear geometry, so you get photons entangled in transverse momentum, and you basically want to get the momentum of one photon from the other, by studying the wall. 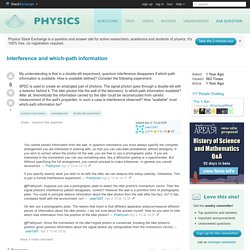 To get interference, the momentum change must be indistinguishable in principle, not just practically. How could this happen? Well, the wall itself is also a quantum object, so if its two possible momenta from the photon are both within the uncertainty of its total momentum, it is not possible to distinguish the two cases. A Double Slit Quantum Eraser Experiment. A Double-Slit Quantum Eraser Experiment This web-page was created as an assignment for PHY 566, taught by Prof. 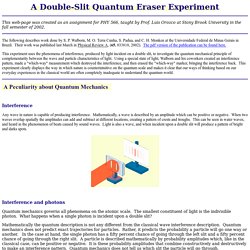 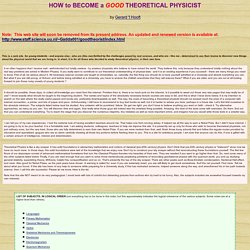 An updated and renewed version is available at: This is a web site for young students - and anyone else - who are (like me) thrilled by the challenges posed by real science, and who are - like me - determined to use their brains to discover new things about the physical world that we are living in. In short, it is for all those who decided to study theoretical physics, in their own time. It so often happens that I receive mail - well-intended but totally useless - by amateur physicists who believe to have solved the world. It should be possible, these days, to collect all knowledge you need from the internet. I can tell you of my own experiences.

Theoretical Physics is like a sky scraper. Note that this site NOT meant to be very pedagogical. Languages:English is a prerequisite. French, German, Spanish and Italian may be useful too, but they are not at all necessary. The Quantum Physics of Free Will.