Crystal River - The most beautiful river on earth [Pics] 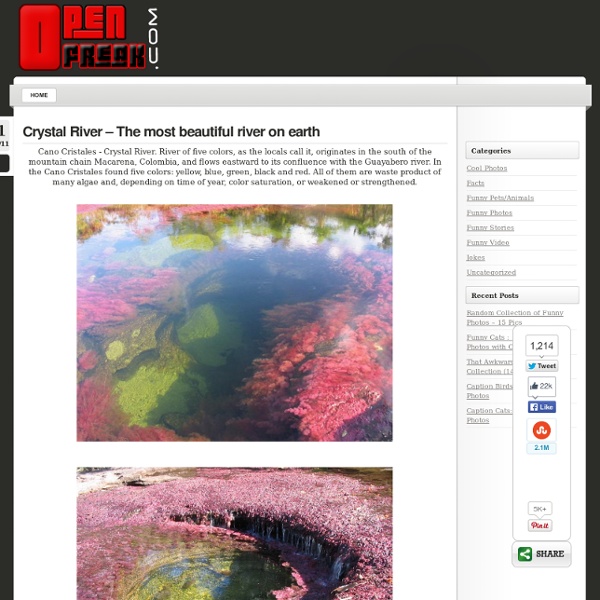 Cano Cristales - Crystal River. River of five colors, as the locals call it, originates in the south of the mountain chain Macarena, Colombia, and flows eastward to its confluence with the Guayabero river. In the Cano Cristales found five colors: yellow, blue, green, black and red. All of them are waste product of many algae and, depending on time of year, color saturation, or weakened or strengthened. Share on Tumblr

Incredible Video Of Giant Sea Icicle Freezing Everything In Its Path Frozen sea brine is freezing everything in its path. The BBC filmed brinicles, solidified salt water, as they descended into Antarctic water and iced over everything sitting at the ocean bottom. Brinicles are underwater icicles that form around salt water sinking from sea ice. The film crew found a brinicle beneath the ice off the foothills of the volcano Mount Erebus. Once the phenomenon was spotted, the news organization set up time lapse cameras to capture the freezing salt overtaking starfish and sea urchins as it coated the sea floor in ice. The video is the first-ever footage of a brinicle forming, according to the BBC.

The First Zombie-Proof House Somehow, ritual drunk-conversation concerning team captains for the apocalypse has become a major part of the lives of 20-somethings. Having been matured in the Grandaddy-crowned masterpiece film (put “A.M. 180” on and forget that you have a job) 28 Days Later and the best-selling Zombie Survival Guide, we’re all a little too ready to deal with the 2012 zombie apocalypse of our dreams. “The Safe House,” designed by KWK Promes, starts to get eerily close to something I could work with, if say 200 bludgeoned members of the undead army came over to eat their way into borrowing some sugar. “The most essential item for our clients was acquiring the feeling of maximum security,” begins the designers’ website in the summary of the structure. Who wouldn’t feel safe in a concrete rectangle that folds in upon itself to become completely sealed? Even the windows are covered with a slab of concrete when the structure is on nap time.

Still life: Bent objects UPDATE: The Return of Bent Objects Wires transform these objects from inanimate to hilarious works of art. Little polish girl Best Cosplay Ever (This Week) - 06.06.11 Although cosplay has been present for decades within the comics, anime, and sci-fi/fantasy fandoms, social media has played an integral role in the thriving community of costuming that exists today and cosplay communities such as Cosplay.com and the Superhero Costuming Forum. In honor of the many fans who’ve displayed excellence in the mastery of homemade disguise, craftsmanship, and sartorial superheroics, ComicsAlliance has created Best Cosplay Ever (This Week), a weekly collection of some of the most impeccable, creative, and clever costumes that we’ve discovered and assembled into our own super-showcase of pure fan-devoted talent. Zatanna, cosplayed by Meagan Marie Spike Spiegel, cosplayed by Zaid

Amazingly Creative Drawing Vs Photography This wonderful work has done by a very talented Belgian painter, illustrator, portraitist, caricaturist and photographer Ben Heine. This creative artist was born in Abidjan, Ivory Coast. He Studied graphic arts and sculpture and I also have a degree in journalism. Lets take a look at some of his awesome works that he calls “Drawing Vs Photography” or “Imagination Vs Reality”. National Geographic Photo Contest 2011 - Alan Taylor National Geographic is currently holding its annual photo contest, with the deadline for submissions coming up on November 30. For the past nine weeks, the society has been gathering and presenting galleries of submissions, encouraging readers to vote for them as well. National Geographic was kind enough to let me choose among its entries from 2011 for display here on In Focus.

Sharpie Art - Extreme Sharpie Artwork at WomansDay.com Nowadays, Sharpie markers come in more than basic black––they’re available in every color of the rainbow, and in just about every size and shape. They’re great for everyday labeling and organizing, but did you know that they could also be used to decorate everything from guitars to fingernails? WD teamed with Sharpie to find the most unique creations from talented artists across the globe. From a Lamborghini turned objet d’art to a wall mural, check out how different artists uncapped their creativity. Rev Your Engines

Dream Worlds Revealed On Canvas - StumbleUpon Along with some magnificent dreams, Jacek Yerka finds inspiration for his masterful paintings from his childhood memories: the places, remembered feelings and smells of 1950′s Poland. He studied fine art and graphic design before becoming a full time artist in 1980… and we’re glad he did. His paintings will take you through incredible worlds of imagination, bending reality in captivating and clever ways fit to inspire a novel or film.