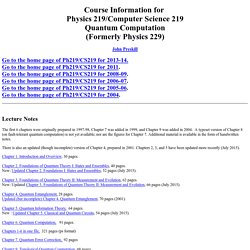 Lecture Notes The first 6 chapters were originally prepared in 1997-98, Chapter 7 was added in 1999, and Chapter 9 was added in 2004. A typeset version of Chapter 8 (on fault-tolerant quantum computation) is not yet available; nor are the figures for Chapter 7. Introduction to Quantum Information. The classical theory of computation usually does not refer to physics. 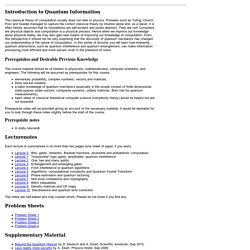 Pioneers such as Turing, Church, Post and Goedel managed to capture the correct classical theory by intuition alone and, as a result, it is often falsely assumed that its foundations are self-evident and purely abstract. They are not! Computers are physical objects and computation is a physical process. Hence when we improve our knowledge about physical reality, we may also gain new means of improving our knowledge of computation.

SelfOrganizingQuantumJul08.pdf. Slloyd_thesis.pdf. X 4, 041013 (2014) - Quantum Phenomena Modeled by Interactions between Many Classical Worlds. We investigate whether quantum theory can be understood as the continuum limit of a mechanical theory, in which there is a huge, but finite, number of classical “worlds,” and quantum effects arise solely from a universal interaction between these worlds, without reference to any wave function. 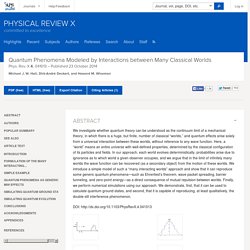 Here, a “world” means an entire universe with well-defined properties, determined by the classical configuration of its particles and fields. In our approach, each world evolves deterministically, probabilities arise due to ignorance as to which world a given observer occupies, and we argue that in the limit of infinitely many worlds the wave function can be recovered (as a secondary object) from the motion of these worlds. QUANTUM PHYSICS 2. Quantum Physics Revealed As Non-Mysterious. This is one of several shortened indices into the Quantum Physics Sequence. 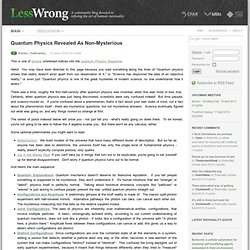 Hello! You may have been directed to this page because you said something along the lines of "Quantum physics shows that reality doesn't exist apart from our observation of it," or "Science has disproved the idea of an objective reality," or even just "Quantum physics is one of the great mysteries of modern science; no one understands how it works.

" There was a time, roughly the first half-century after quantum physics was invented, when this was more or less true. Certainly, when quantum physics was just being discovered, scientists were very confused indeed! But time passed, and science moved on. The series of posts indexed below will show you - not just tell you - what's really going on down there. Some optional preliminaries you might want to read: Quantum Biology Resources. Ftp/arxiv/papers/0810/0810.3536.pdf. Quantum Chaos. Editor's Note: This feature was originally published in our January 1992 issue. 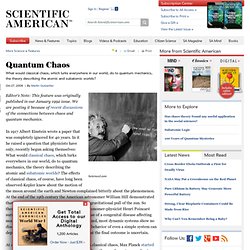 We are posting it because of recent discussions of the connections between chaos and quantum mechanics. In 1917 Albert Einstein wrote a paper that was completely ignored for 40 years. In it he raised a question that physicists have only, recently begun asking themselves: What would classical chaos, which lurks everywhere in our world, do to quantum mechanics, the theory describing the atomic and subatomic worlds? The effects of classical chaos, of course, have long been observed-Kepler knew about the motion of the moon around the earth and Newton complained bitterly about the phenomenon. At the end of the 19th century the American astronomer William Hill demonstrated that the irregularity is the result entirely of the gravitational pull of the sun. Carlo Rovelli. ETH - Quantum Information Theory. Lecturer: Prof. 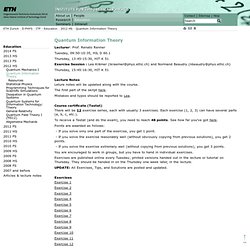 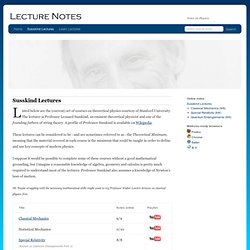 The lecturer is Professor Leonard Susskind, an eminent theoretical physicist and one of the founding fathers of string theory. A profile of Professor Susskind is available on Wikipedia. These lectures can be considered to be - and are sometimes referred to as - the Theoretical Minimum, meaning that the material covered in each course is the minimum that could be taught in order to define and use key concepts of modern physics.

I suppose it would be possible to complete some of these courses without a good mathematical grounding, but I imagine a reasonable knowledge of algebra, geometry and calculus is pretty much required to understand most of the lectures. It from bit from it. Advanced Quantum Mechanics Lecture 8. Aaronson. QM and Category Theory.