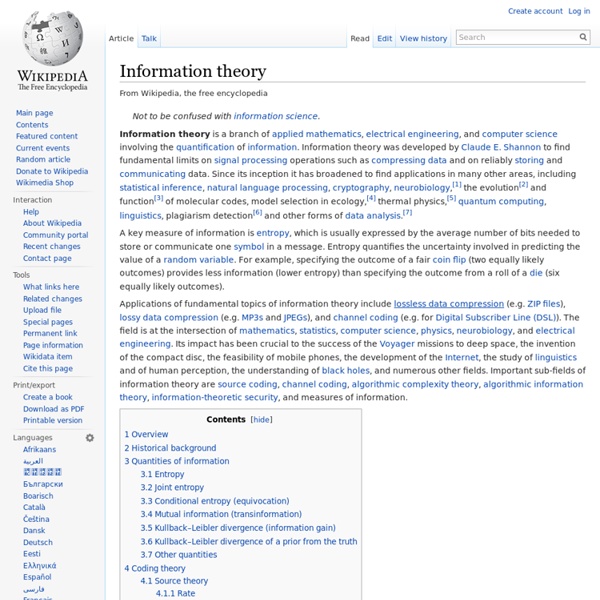 Overview[edit] The main concepts of information theory can be grasped by considering the most widespread means of human communication: language. Two important aspects of a concise language are as follows: First, the most common words (e.g., "a", "the", "I") should be shorter than less common words (e.g., "roundabout", "generation", "mediocre"), so that sentences will not be too long. Such a tradeoff in word length is analogous to data compression and is the essential aspect of source coding. Second, if part of a sentence is unheard or misheard due to noise — e.g., a passing car — the listener should still be able to glean the meaning of the underlying message. Note that these concerns have nothing to do with the importance of messages. Information theory is generally considered to have been founded in 1948 by Claude Shannon in his seminal work, "A Mathematical Theory of Communication". Historical background[edit] With it came the ideas of Quantities of information[edit] Entropy[edit] . that Related:  i have questions and needs

Entropy and Information Theory 3 March 2013 This site provides the current version of the first edition of the book Entropy and Information Theory by R.M. Gray in the Adobe portable document format (PDF). This format can be read from a Web browser by using the Acrobat Reader helper application, which is available for free downloading from Adobe. The current version is a corrected and slightly revised version of the second printing (1991) of the Springer-Verlag book of the same name, which is now out of print. Permission is hereby given to freely print and circulate copies of this book so long as it is left intact and not reproduced for commercial purposes.

The Traditional Four-Step Method | Bean Institute Dry beans are an incredibly nutritious, versatile and inexpensive ingredient. The cost of one ½ cup serving of dry beans is about one-third the cost of canned beans. Cooking with dry beans is easy and rewarding, but to cook with dry beans versus canned beans you need to follow four simple steps. For best results, follow these tips! Keep cooking water at a gentle simmer to prevent split skins.Since beans expand as they cook, add warm water periodically during the cooking process to keep the beans covered.Stir beans occasionally throughout the cooking process to prevent sticking.You can “bite test” beans for tenderness.

Cybernetics Cybernetics is a transdisciplinary[1] approach for exploring regulatory systems, their structures, constraints, and possibilities. Cybernetics is relevant to the study of systems, such as mechanical, physical, biological, cognitive, and social systems. Cybernetics is applicable when a system being analyzed incorporates a closed signaling loop; that is, where action by the system generates some change in its environment and that change is reflected in that system in some manner (feedback) that triggers a system change, originally referred to as a "circular causal" relationship. Concepts studied by cyberneticists (or, as some prefer, cyberneticians) include, but are not limited to: learning, cognition, adaptation, social control, emergence, communication, efficiency, efficacy, and connectivity. Norbert Wiener defined cybernetics in 1948 as "the scientific study of control and communication in the animal and the machine Definitions[edit] Other notable definitions include: Etymology[edit] W.

As We May Think - Magazine As Director of the Office of Scientific Research and Development, Dr. Vannevar Bush has coordinated the activities of some six thousand leading American scientists in the application of science to warfare. In this significant article he holds up an incentive for scientists when the fighting has ceased. He urges that men of science should then turn to the massive task of making more accessible our bewildering store of knowledge. For years inventions have extended man's physical powers rather than the powers of his mind. This has not been a scientist's war; it has been a war in which all have had a part. For the biologists, and particularly for the medical scientists, there can be little indecision, for their war has hardly required them to leave the old paths. It is the physicists who have been thrown most violently off stride, who have left academic pursuits for the making of strange destructive gadgets, who have had to devise new methods for their unanticipated assignments.

Entropy (information theory) 2 bits of entropy. A single toss of a fair coin has an entropy of one bit. A series of two fair coin tosses has an entropy of two bits. The number of fair coin tosses is its entropy in bits. This random selection between two outcomes in a sequence over time, whether the outcomes are equally probable or not, is often referred to as a Bernoulli process. The entropy of such a process is given by the binary entropy function. This definition of "entropy" was introduced by Claude E. Entropy is a measure of unpredictability of information content. Now consider the example of a coin toss. English text has fairly low entropy. If a compression scheme is lossless—that is, you can always recover the entire original message by decompressing—then a compressed message has the same quantity of information as the original, but communicated in fewer characters. Shannon's theorem also implies that no lossless compression scheme can compress all messages. . The average uncertainty , with

Harlan County War The Harlan County War, or Bloody Harlan, was a series of coal mining-related skirmishes, executions, bombings, and strikes (both attempted and realized) that took place in Harlan County, Kentucky during the 1930s. The incidents involved coal miners and union organizers on one side, and coal firms and law enforcement officials on the other.[1] The question at hand: the rights of Harlan County coal miners to organize their workplaces and better their wages and working conditions. It was a nearly decade-long conflict, lasting from 1931 to 1939. Before its conclusion, an indeterminate number of miners, deputies, and bosses would be killed, state and federal troops would occupy the county more than half a dozen times, two acclaimed folk singers would emerge, union membership would oscillate wildly, and workers in the nation's most anti-labor coal county would ultimately be represented by a union. History[edit] "Sheriff J.H. Impact[edit] See also[edit] References[edit] External links[edit]

Decision theory Normative and descriptive decision theory[edit] Since people usually do not behave in ways consistent with axiomatic rules, often their own, leading to violations of optimality, there is a related area of study, called a positive or descriptive discipline, attempting to describe what people will actually do. Since the normative, optimal decision often creates hypotheses for testing against actual behaviour, the two fields are closely linked. Furthermore it is possible to relax the assumptions of perfect information, rationality and so forth in various ways, and produce a series of different prescriptions or predictions about behaviour, allowing for further tests of the kind of decision-making that occurs in practice. In recent decades, there has been increasing interest in what is sometimes called 'behavioral decision theory' and this has contributed to a re-evaluation of what rational decision-making requires.[1] What kinds of decisions need a theory? Choice under uncertainty[edit]

Intelligence amplification Use of information technology to augment human intelligence Intelligence amplification (IA) (also referred to as cognitive augmentation, machine augmented intelligence and enhanced intelligence) refers to the effective use of information technology in augmenting human intelligence. The idea was first proposed in the 1950s and 1960s by cybernetics and early computer pioneers. IA is sometimes contrasted with AI (artificial intelligence), that is, the project of building a human-like intelligence in the form of an autonomous technological system such as a computer or robot. AI has encountered many fundamental obstacles, practical as well as theoretical, which for IA seem moot, as it needs technology merely as an extra support for an autonomous intelligence that has already proven to function. Major contributions[edit] William Ross Ashby: Intelligence Amplification[edit] ... J. "Man-Computer Symbiosis" is a key speculative paper published in 1960 by psychologist/computer scientist J.C.R.

Codognet states, "Information theory can be thought of as a sort of simplified or idealized semiotics: a ciphering/deciphering algorithm represents the interpretation process used to decode some signifier (encoded information) into some computable signified (meaningful information) to be fed to a subsequent processing step. This process, like semiosis itself, is, of course unlimted." by arlene Mar 24

Related:
Related:  i have questions and needs