Symphony of Science - the Quantum World! 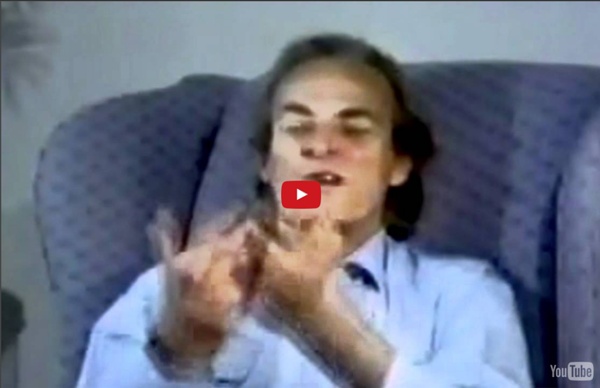 Physicists Achieve Quantum Teleportation of Photon Over 25 Kilometers For the first time, a team of physicists have successfully teleported a quantum state of a photon to a crystal over 25 kilometers away through a fiber optic cable. This effectively showed that the photon’s quantum state, not its composition, is important to the teleportation process. The team was led by Nicolas Gisin of the University of Geneva and the results were published in the journal Nature Photonics. With this new paper, Gisin’s team has successfully squashed the previous record they set a decade ago by teleporting a quantum state of a proton 6 kilometers. The quantum state of the photon is able to preserve information under extreme conditions, including the difference between traveling as light or becoming stored in the crystal like matter.

Quantum nonlocality Quantum nonlocality is the phenomenon by which the measurements made at a microscopic level necessarily refute one or more notions (often referred to as local realism) that are regarded as intuitively true in classical mechanics. Rigorously, quantum nonlocality refers to quantum mechanical predictions of many-system measurement correlations that cannot be simulated by any local hidden variable theory. Many entangled quantum states produce such correlations when measured, as demonstrated by Bell's theorem. Experiments have generally favoured quantum mechanics as a description of nature, over local hidden variable theories.[1][2] Any physical theory that supersedes or replaces quantum theory must make similar experimental predictions and must therefore also be nonlocal in this sense; quantum nonlocality is a property of the universe that is independent of our description of nature.

Blue Sky - Why is the Sky Blue? On a clear sunny day, the sky above us looks bright blue. In the evening, the sunset puts on a brilliant show of reds, pinks and oranges. Why is the sky blue? What makes the sunset red? Teaching with TLC: 10 ways to make physical science FUN! This month we've been completing lots of physical science lessons that my kids do not want to put down. I just love it when they are hooked on learning! My kids have been learning all about simple machines, matter, and electricity from the best science teachers at the Edison Home. What better place to learn about science than Edison's home! A big thank you to the wild wizards there! Quantum entanglement Quantum entanglement is a physical phenomenon that occurs when pairs or groups of particles are generated or interact in ways such that the quantum state of each particle cannot be described independently – instead, a quantum state may be given for the system as a whole. Such phenomena were the subject of a 1935 paper by Albert Einstein, Boris Podolsky and Nathan Rosen,[1] describing what came to be known as the EPR paradox, and several papers by Erwin Schrödinger shortly thereafter.[2][3] Einstein and others considered such behavior to be impossible, as it violated the local realist view of causality (Einstein referred to it as "spooky action at a distance"),[4] and argued that the accepted formulation of quantum mechanics must therefore be incomplete. History[edit] However, they did not coin the word entanglement, nor did they generalize the special properties of the state they considered.

Inspire Her Mind Science There’s a young 4-year old girl shuffling through a chest full of various dress-up clothes. The copy asks: Does dress-up determine her future? Science - Quantum Physics of Consciousness and Physical Reality by StarStuffs We may therefore regard matter as being constituted by the regions of space in which the field is extremely intense...There is no place in this new kind of physics for the field and matter, for the field is the only reality." Albert Einstein, with his general theory of relativity, opened the doors of science along with the mystical realities. Einstein theorized that space and time are intertwined and that matter is inseparable from an ever-present quantum energy field and this is the sole reality underlying all appearances. This theory challenged the basic assumptions about the universe and what it contained. Physicists found that the most basic atomic particles in the cosmos comprise the very fabric of the material universe.

TryEngineering Lesson Focus Lesson focuses on the engineering behind keeping food and other items cool. Students work in teams to develop a system to make an insulated liquid container that will keep chilled water as cool as possible for an hour using everyday items. Students will need to devise a way to have a thermometer rest in the water and be able to read the temperature throughout the hour. They plan their design, execute and test their system and share their experiences with the class.

Earth's mantle helps hunt for fifth force of nature Interactions NASAElectrons' spin may give rise to a force that allows particles to interact over very long distances. In general, people tend to use the phrase "force of nature" loosely, as in "she's a real force of nature." But physicists are pickier--they reserve the phrase for just four separate, universal forces they call the "fundamental forces": gravity, electro-magnetism, and the strong and weak nuclear forces, which hold the nucleus together and are involved with radioactive decay, respectively. That doesn't mean physicists rule out the possibility that other forces exist. Since the models they have for explaining everything are incomplete, there's a fairly good chance that there's something else out there, pulling matter apart or pushing it together in a different way than all the forces identified so far. Scientists search for the 'unparticle'

Balancing Brooms - finding the centre of mass Listen Now Download as mp3 from the show Should I Lie Down to Tan? What you Need Outline of Argument from Recollection The Argument from Recollection: Phaedo 72e-77a 1. If a person is reminded of anything, he must first know that thing at one time or another. (73c 1-3) 2. Physics – News, Research and Analysis – The Conversation – page 1 The energy needed to pull magnets apart comes from you, and you get it from the food you eat. And the plants or animals you eat get their energy from other plants and animals, or from the Sun. All energy comes from somewhere. The award of a Nobel Prize in physics to Donna Strickland is an opportunity to build support for women in science, says one female physics professor. Donna Strickland is the first woman in 55 years to be awarded the Nobel Prize in Physics.