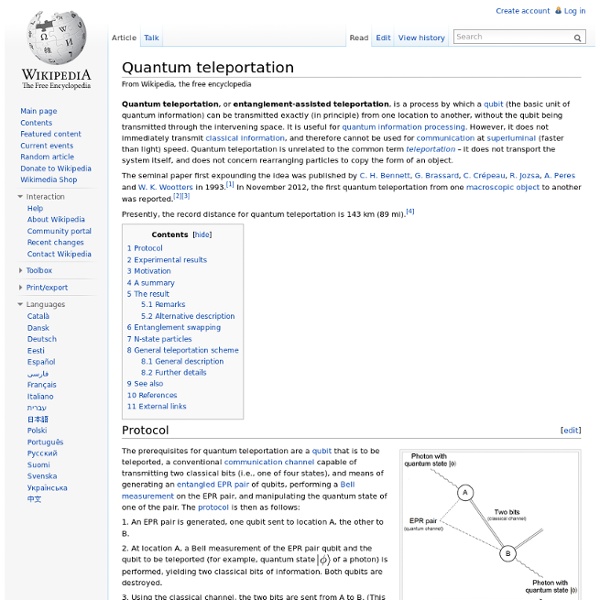 Quantum teleportation is a process by which quantum information (e.g. the exact state of an atom or photon) can be transmitted (exactly, in principle) from one location to another, with the help of classical communication and previously shared quantum entanglement between the sending and receiving location. Because it depends on classical communication, which can proceed no faster than the speed of light, it cannot be used for superluminal transport or communication of classical bits. It also cannot be used to make copies of a system, as this violates the no-cloning theorem. Although the name is inspired by the teleportation commonly used in fiction, current technology provides no possibility of anything resembling the fictional form of teleportation. Non-technical summary[edit] Quantum teleportation provides a mechanism of moving a qubit from one location to another, without having to physically transport the underlying particle that a qubit is normally attached to. Protocol[edit] and

Teleportation Teleportation, or Teletransportation, is the theoretical transfer of matter or energy from one point to another without traversing the physical space between them. It is a common subject of science fiction literature, film, and television. Etymology[edit] American writer Charles Fort coined the word teleportation in 1931[1][2] to describe the strange disappearances and appearances of anomalies, which he suggested may be connected. He joined the Greek prefix tele- (meaning "distant") to the root of the Latin verb portare (meaning "to carry").[citation needed] Fort's first formal use of the word occurred in the second chapter of his 1931 book, Lo! "Mostly in this book I shall specialize upon indications that there exists a transportory force that I shall call Teleportation. Fort suggested that teleportation might explain various allegedly paranormal phenomena. Fiction[edit] The earliest recorded story of a "matter transmitter" was Edward Page Mitchell's "The Man Without a Body" in 1877.[4]

IT Conversations Goodbye from IT Conversations Since it’s inception, IT Conversations has published over 3300 audio programs. After ten years of operation and six years with me at the helm, all that is coming to an end. Those of us involved in the day-to-day operation and management of the site have decided that IT Conversations has run its course. We will continue to publish shows until around December 1, 2012. We’re going to get the very best of what’s left in the queue out the door before we turn out the lights. Our goal has always been to publish good, quality shows that will stand the test of time and we've always envisioned them being around for a long time. Phil Windley Executive Producer, IT Conversations Doug Kaye - All's Well That Ends Well When Doug Kaye created IT Conversations in 2003, most people didn't know what a podcast was and why they should care. Patrick Lightbody - Gathering Insights from RUM How The Sensor Revolution Will Transform the Internet Richard Cook - How Complex Systems Fail

The Great Beyond Posted on behalf of Declan Butler. The World Health Organization (WHO) announced plans on 24 October to produce millions of doses of two experimental Ebola vaccines by the end of 2015. The Ebola virus has caused about 5,000 deaths in West Africa during the current epidemic. Hundreds of thousands of doses should be available to help affected countries before the end of June, the WHO said at the conclusion of a meeting in Geneva, Switzerland. Phase I trials of two vaccine candidates have started, and as many as five other vaccines could begin testing by 2015, says Marie-Paul Kieny, WHO assistant director-general for health systems and innovation. As of 19 October, Ebola had infected almost 10,000 people in Sierra Leone, Liberia and Guinea and killed around 5,000 of them, the WHO estimates. First clinical trials under way The two vaccines whose production will be increased are already in early-stage testing in healthy volunteers. Advanced testing Ethical and practical considerations

Modern Mechanix Sigalon's Science & Technology Soup Stag beetle males give nasty nips despite massive jaws Armed with a ferocious pair of mandibles, male stag beetles appear well prepared to take on the world. 'Their jaws are not just for ornamentation, they really use them to fight', says Jana Goyens from the University of Antwerp, Belgium, adding that males grapple over the choicest patches of rotten wood for their mates to lay their eggs in. Describing a stag beetle battle, Goyens explains that one beetle grabs the other one around its body and then rears up in an attempt to hurl his opponent over his head and onto its back. 'It is clear which one is the loser', says Goyens. But something puzzled her: 'It seemed unlikely that stag beetles could bite forcefully because they have these long jaws', she says.