Quantum Entanglement Could Stretch Across Time 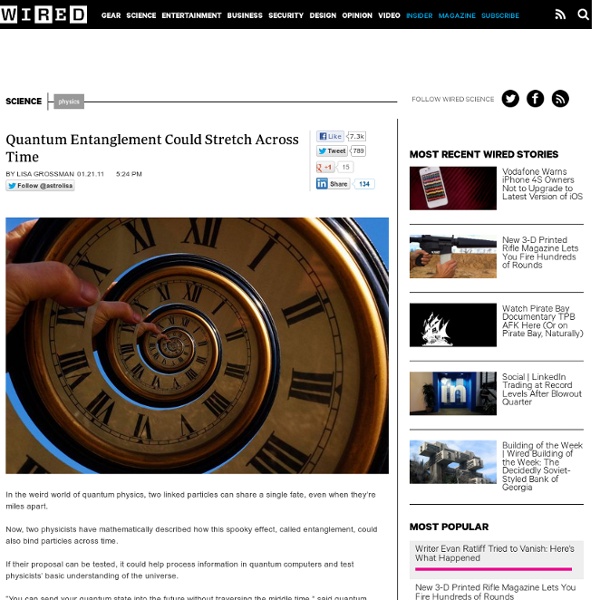 In the weird world of quantum physics, two linked particles can share a single fate, even when they’re miles apart. Now, two physicists have mathematically described how this spooky effect, called entanglement, could also bind particles across time. If their proposal can be tested, it could help process information in quantum computers and test physicists’ basic understanding of the universe. “You can send your quantum state into the future without traversing the middle time,” said quantum physicist S. Jay Olson of Australia’s University of Queensland, lead author of the new study. In ordinary entanglement, two particles (usually electrons or photons) are so intimately bound that they share one quantum state — spin, momentum and a host of other variables — between them. Physicists have figured out how to use entanglement to encrypt messages in uncrackable codes and build ultrafast computers. Olson explained them with a Star Trek analogy. “It stimulated our imaginations,” said Fuentes. Related:  Quantumly

Multiple Asteroid Strikes May Have Killed Mars’s Magnetic Field | Wired Science Once upon a time, Mars had a magnetic field, just like Earth. Four billion years ago, it vanished, taking with it the planet’s chances of evolving life as we know it. Now scientists have proposed a new explanation for its disappearance. A model of asteroids striking the red planet suggests that, while no single impact would have short-circuited the dynamo that powered its magnetism, a quick succession of 20 asteroid strikes could have done the job. “Each one crippled a little bit,” said geophysicist Jafar Arkani-Hamed of the University of Toronto, author of the new study. “We believe those were enough to cripple, cripple, cripple, cripple until it killed all of the dynamo forever.” Rocky planets like Earth, Mars, Mercury and even the moon get their magnetic fields from the movement of molten iron inside their cores, a process called convection. But Arkani-Hamed’s new study in the Journal of Geophysical Research suggests that just one impact wouldn’t suffice. Image: NASA See Also:

10/23/13, 16:19-- This may solve Einstein's A Step Towards Quantum Computing: Entangling 10 Billion Particles | 80beats In life, most people try to avoid entanglement, be it with unsavory characters or alarmingly large balls of twine. In the quantum world, entanglement is a necessary step for the super-fast quantum computers of the future. According to a study published by Nature today, physicists have successfully entangled 10 billion quantum bits, otherwise known qubits. But the most significant part of the research is where the entanglement happened–in silicon–because, given that most of modern-day computing is forged in the smithy of silicon technology, this means that researchers may have an easier time incorporating quantum computers into our current gadgets. Quantum entanglement occurs when the quantum state of one particle is linked to the quantum state of another particle, so that you can’t measure one particle without also influencing the other. Spinning particles are all well and nice, but what do they have to do with computing? Image: Stephanie Simmons

Op-Ed: The Mass Extinction of Scientists Who Study Species | Wired Science We are currently in a biodiversity crisis. A quarter of all mammals face extinction, and 90 percent of the largest ocean fish are gone. Species are going extinct at rates equaled only five times in the history of life. Scientists who classify, describe and examine the relationships between organisms are themselves going extinct. Take for example the aplacophorans, a rare rare group of invertebrates closely related to octopuses, squids, snails and clams. Fewer than two dozen scientific papers have been published on the group since 2005, even though many new species await discovery and description. If 50 percent of the species of aplacophoran went extinct tomorrow, we would never know. Amelie’s story is tragically common. Both kinorhynchs and gnathostomulids are small, less than one-tenth of an inch in length, and dwell in between grains of sand and mud on the ocean floor. Aplacophorans This problem plagues well-known groups, too. Why the loss of taxonomists? Why?

10/23/13, 19:15-- This actually coincides with Quantum Entanglement Whatever happened to one particle would thus immediately affect the other particle, wherever in the universe it may be. Einstein called this "Spooky action at a distance." Amir D. Aczel, Entanglement, The Greatest Mystery In Physics. The Theory When a photon (usually polarized laser light) passes through matter, it will be absorbed by an electron. When the original photon splits into two photons, the resulting photon pair is considered entangled. The process of using certain crystals to split incoming photons into pairs of photons is called parametric down-conversion. Normally the photons exit the crystal such that one is aligned in a horizontally polarized light cone, the other aligned vertically. To illustrate, if an entangled photon meets a vertical polarizing filter (analagous to the fence in Figure 4.4), the photon may or may not pass through. The Practice Experiments have shown that Einstein may have been wrong: entangled photons seem to communicate instantaneously. Figure 5.1.

New Doubts Raised About Potential Bee-Killing Pesticide | Wired Science A federal entomologist has become the latest researcher to voice doubts about neonicotinoids, a controversial new type of pesticide that may be linked to the collapse of honeybee populations in the United States. The Independent reports that in a documentary screened in Europe but not yet broadcast stateside, USDA bee specialist Jeffrey Pettis describes exposing two groups of bees, one dosed with a neonicotinoid called imidacloprid, to Nosema, a common honeybee disease. Pesticide-dosed bees proved especially vulnerable to infection. Imidacloprid is manufactured by German agrochemical Bayer, who also manufacture clothianidin, another neonicotinoid. Since its approval, clothianidin has become widespread. Correlation isn’t cause, but there are already grounds for concern about clothianidin. “Clothianidin’s major risk concern is to non-target insects (that is, honey bees),” wrote those researchers. Image: Flickr, Jack Wolf See Also:

10/23/13, 19:19-- This essentially would be Bibliography of Quantum Cryptography by Gilles Brassard Département IRO, Université de Montréal. The original PostScript file from Gilles Brassard - provided by Edith Stoeveken - was converted to ASCII and reformatted in HTML; Sept 2 1994, Stephan Kaufmann. Abstract This paper provides an extensive annotated bibliography of papers that have been written on quantum cryptography and related topics. 1. For ages, mathematicians have searched for a system that would allow two people to exchange messages in perfect privacy. In addition to key distribution, quantum techniques may also assist in the achievement of subtler cryptographic goals, important in the post-cold war world, such as protecting private information while it is being used to reach public decisions. In the past few years, a remarkable surge of interest in the international scientific and industrial community has propelled quantum cryptography into mainstream computer science and physics. 2. Quantum cryptography is best known for key distribution. 3. 4. 5. 6. 7.

Sleeping Protects Memories From Corruption | Wired Science “You must remember this,” Sam the piano player crooned to Humphrey Bogart and Ingrid Bergman in Casablanca. The couple might have recalled even more about their days in Paris if they’d been napping when Sam played the tune again. Replaying memories while people are awake leaves their memories subject to tinkering. But reactivating memories during sleep protects them from interference, researchers in Germany and Switzerland report online January 23 in Nature Neuroscience. The finding shows that the brain handles memories differently during sleep than while awake, says Sara Mednick, a cognitive neuroscientist at the University of California, San Diego who was not involved in the research. In the new study, volunteers played a Concentration-type game in which they had to remember the locations of pairs of cards. Both sleeping and awake volunteers who didn’t have their memories jogged by the odor remembered about 60 percent of the pairs. Image: Flickr/mollyollyoxenfree See Also:

Squeeze light to teleport quantum energy - physics-math - 23 January 2014 Putting the squeeze on light may be the key to teleporting energy across vast distances. Although the amount of energy that could theoretically be transmitted is tiny for now, it could be enough to power quantum computers that don't overheat. For years physicists have been smashing distance records for quantum teleportation, which exploits quantum entanglement to send encrypted information. No physical matter is transmitted, and nothing is travelling faster than light. Physicists have done this with light and with matter, such as entangled ions. Quantum toothpaste Theory has it that a vacuum is not truly empty – it is constantly roiling with tiny fluctuations that cause particles to pop in and out of existence. The quantum field in the vacuum of space is usually at its lowest energy level. Light work To get greater reach, Hotta and his colleagues have now applied a twist to their theory that adds squeezed light to the vacuum. Normally, photons travelling through a vacuum arrive randomly.