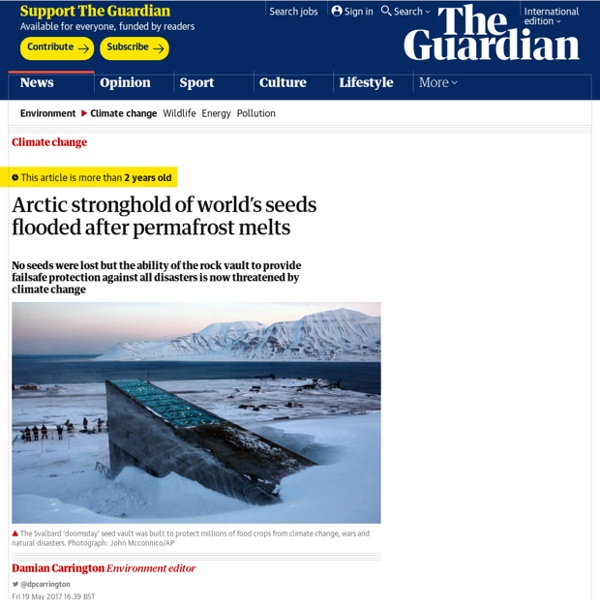 It was designed as an impregnable deep-freeze to protect the world’s most precious seeds from any global disaster and ensure humanity’s food supply forever. But the Global Seed Vault, buried in a mountain deep inside the Arctic circle, has been breached after global warming produced extraordinary temperatures over the winter, sending meltwater gushing into the entrance tunnel. The vault is on the Norwegian island of Spitsbergen and contains almost a million packets of seeds, each a variety of an important food crop. When it was opened in 2008, the deep permafrost through which the vault was sunk was expected to provide “failsafe” protection against “the challenge of natural or man-made disasters”. But soaring temperatures in the Arctic at the end of the world’s hottest ever recorded year led to melting and heavy rain, when light snow should have been falling. But the breach has questioned the ability of the vault to survive as a lifeline for humanity if catastrophe strikes.

Sweden, Germany and France are the EU’s climate leaders, says study European leaders have vowed to continue fighting climate change after President Donald Trump announced last night he was pulling the US out of the Paris climate agreement. So what are EU states doing – or not doing – to contribute to the bloc’s pledge of a 40% cut in greenhouse gas emissions by 2030, compared to 1990 levels? According to a new study, only three European countries – Sweden, Germany and France – are doing enough to keep the EU on track to deliver on promises made at the COP21 summit, back in 2015. Image: EU Climate Leader Board The EU Climate Leader Board, co-developed by non-profit organizations Carbon Market Watch and Transport & Environment, evaluates where countries stand on the Effort Sharing Regulation, the EU’s key legislation on emissions cuts from transport, agriculture, waste and buildings.

Svalbard Global Seed Vault Floods as Permafrost Melts This story originally appeared on the Guardian and is part of the Climate Desk collaboration. It was designed as an impregnable deep-freeze to protect the world’s most precious seeds from any global disaster and ensure humanity’s food supply forever. But the Global Seed Vault, buried in a mountain deep inside the Arctic circle, has been breached after global warming produced extraordinary temperatures over the winter, sending meltwater gushing into the entrance tunnel. The vault is on the Norwegian island of Spitsbergen and contains almost a million packets of seeds, each a variety of an important food crop. When it was opened in 2008, the deep permafrost through which the vault was sunk was expected to provide “failsafe” protection against “the challenge of natural or man-made disasters”. But soaring temperatures in the Arctic at the end of the world’s hottest ever recorded year led to melting and heavy rain, when light snow should have been falling.

The rain in Spain falls mainly on genebank accessions The last couple of weeks have been all go. Last week I was at IRRI in the Philippines, but I’ve blogged about that genebank before here, so I won’t say much more about it now, save that they have a cool new automated seed sorter. And of course the breeders whom the genebank serves have been very busy, and successful. Then this week I visited the Spanish national genebank at the Centro Nacional de Recursos Fitogenéticos of the Instituto Nacional de Investigación y Tecnología Agraria y Alimentaria, just outside the historic town Alcalá de Henares, not far from Madrid. It’s been going since the early 1980s, and it forms the hub of a network of 37 collections spread out all over the country. As such, it aims to provide centralized long-term conservation for the country’s seed collections, as well as managing the national inventory, which feeds data into Eurisco and thence Genesys.

Earth Overshoot Day: Mankind has already consumed more natural resources than the planet can renew throughout 2017 Humans have already used up their allowance for water, soil, clean air and other resources on Earth for the whole of 2017. Earth Overshoot Day is on 2 August this year, according to environmental groups WWF and the Global Footprint Network. The date, earlier this year than in 2016, means humanity will survive on “credit” until 31 December. “By August 2 2017, we will have used more from Nature than our planet can renew in the whole year,” the groups said in a statement. “This means that in seven months, we emitted more carbon than the oceans and forests can absorb in a year, we caught more fish, felled more trees, harvested more, and consumed more water than the Earth was able to produce in the same period.”

Short Answers to Hard Questions About Climate Change - The New York Times 3. Is there anything I can do about climate change? Fly less, drive less, waste less. You can reduce your own carbon footprint in lots of simple ways, and most of them will save you money. You can plug leaks in your home insulation to save power, install a smart thermostat, switch to more efficient light bulbs, turn off the lights in any room where you are not using them, drive fewer miles by consolidating trips or taking public transit, waste less food and eat less meat. Perhaps the biggest single thing individuals can do on their own is to take fewer airplane trips; just one or two fewer plane rides per year can save as much in emissions as all the other actions combined.

Earth - There are diseases hidden in ice, and they are waking up Throughout history, humans have existed side-by-side with bacteria and viruses. From the bubonic plague to smallpox, we have evolved to resist them, and in response they have developed new ways of infecting us. We have had antibiotics for almost a century, ever since Alexander Fleming discovered penicillin. In response, bacteria have responded by evolving antibiotic resistance. The battle is endless: because we spend so much time with pathogens, we sometimes develop a kind of natural stalemate. However, what would happen if we were suddenly exposed to deadly bacteria and viruses that have been absent for thousands of years, or that we have never met before?

How many genebanks are there in the world? The UN Statistics Division (UNSD) is responsible for bringing together data on the Sustainable Development Goals, and does a generally pretty good job of explaining the just-agreed targets and indicators on its new(ish) website. Let’s remind ourselves that Goal 2 is: “End hunger, achieve food security and improved nutrition and promote sustainable agriculture.” And that Target 2.5 and its associated indicators are as follows:

The World Bank The Atlas of Sustainable Development Goals 2018 presents maps, charts, and stories related to the 17 Sustainable Development Goals. It discusses trends, comparisons, and measurement issues using accessible and shareable data visualizations. The data draw on the World Development Indicators the World Bank's compilation of internationally comparable statistics about global development and the quality of people's lives. For each of the SDGs, relevant indicators have been chosen to illustrate important ideas. This contents of this publication are available as a PDF, the data are available in the World Bank's Data Catalog and the code used to generate the majority of figures are available on Github. Melting glaciers in Swiss Alps could reveal hundreds of mummified corpses Swiss police say hundreds of bodies of mountaineers who have gone missing in the Alps in the past century could emerge in coming years as global warming forces the country’s glaciers to retreat. Alpine authorities have registered a significant increase in the number of human remains discovered last month, with the body of a man missing for 30 years the most recent to be uncovered. Rescue teams in Saas Valley in the Valais canton were called last Tuesday after two climbers retreating from an aborted ascent spotted a hand and two shoes protruding from the Hohlaub glacier. Rescuers spent two hours freeing the mummified body with icepicks and their bare hands, also recovering a silver wristwatch and a ring. A helicopter flew the remains to Bern, where forensics experts matched the DNA to that of a German citizen, born in 1943, who had gone missing on a hike in 11 August 1987.

Arctic melting feeds on itself - Climate News NetworkClimate News Network Melting sea ice is affecting the closely-linked Arctic climate in a feedback that will speed up warming there, scientists say. LONDON, 12 June, 2016 – Scientists have established at least one factor in the record melting of northern Greenland in 2015. The Arctic itself played a hand in what happened. In a process that engineers call positive feedback, high atmospheric pressure and clear skies over the Arctic region practically committed the northwest of Greenland to an episode of melting at record rates. And because the Arctic is the fastest-warming region on Earth, and because atmosphere and ocean influence each other, the steady loss of sea ice each year has forced a change in wind patterns. This in turn has played back into the climatic machinery, according to a new study in Nature Communications.