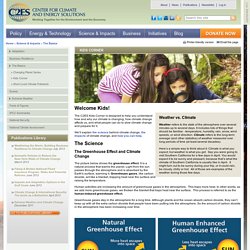 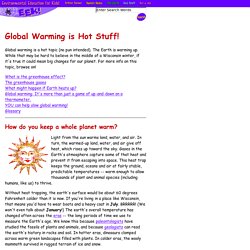 The Earth is warming up. While that may be hard to believe in the middle of a Wisconsin winter, if it's true it could mean big changes for our planet. For more info on this topic, browse on! A Student's Guide to Global Climate Change. Global Warming Facts, Causes and Effects of Climate Change. Jump to Section Q: What is global warming? A: Here's a simple definition of global warming.

(And yes, it's really happening.) Over the past 50 years, the average global temperature has increased at the fastest rate in recorded history. And experts see the trend is accelerating: All but one of the 16 hottest years in NASA’s 134-year record have occurred since 2000. Climate change deniers have argued that there has been a “pause” or a “slowdown” in rising global temperatures, but several recent studies, including a 2015 paper published in the journal Science, have disproved this claim. Arctic Ice Loss. It’s all over the news: the Earth’s Arctic Region is losing more and more sea ice each and every year – here’s why. 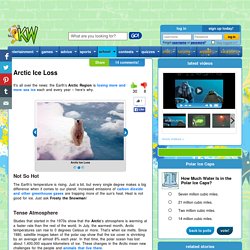 Arctic Ice Loss Not So Hot The Earth’s temperature is rising. Just a bit, but every single degree makes a big difference when it comes to our planet. Global Warming Effects and Causes: A Top 10 List. June 7th, 2009 by Derek Markham One of the biggest issues facing us right now is global warming. 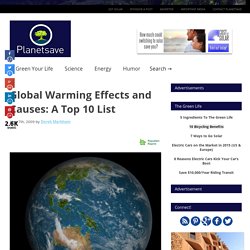 Its effects on animals and on agriculture are indeed frightening, and the effects on the human population are even scarier. The facts about global warming are often debated in politics and the media, but, unfortunately, even if we disagree about the causes, global warming effects are real, global, and measurable. The causes are mainly from us, the human race, and the effects on us will be severe. –> Highly recommended: What is Causing Global Warming? –> You may also like: Global Warming Videos (Best, Funniest, & Most Inspiring) Global Warming Effects and Causes: A Top 10 List 1. Our ever increasing addiction to electricity from coal burning power plants releases enormous amounts of carbon dioxide into the atmosphere. 40% of U.S. 2. Our modern car culture and appetite for globally sourced goods is responsible for about 33% of emissions in the U.S. 3. 4. 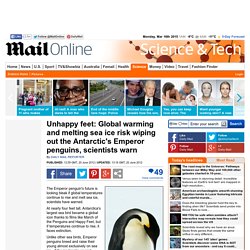 At nearly four feet tall, Antarctica's largest sea bird became a global icon thanks to films like March of the Penguins and Happy Feet, but if temperatures continue to rise, it faces extinction. Unlike other sea birds, Emperor penguins breed and raise their young almost exclusively on sea ice - if the ice breaks up and disappears early into the breeding season, massive breeding failure will occur. There is already a huge death rate at the breeding stages because only half of chicks live to the end of the breeding season and then only half the survivors live to see another year. 'In the 1970s, scientists recorded more than 250 breeding pairs there.

Climate Change 101. Climate change occurs as increased amounts of gases in the atmosphere allow the sun’s light to reach the Earth, but trap its heat radiating back from the surface. 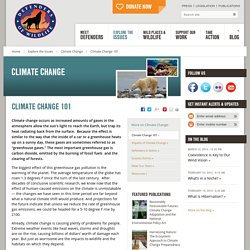 Because the effect is similar to the way that the inside of a car or a greenhouse heats up on a sunny day, these gases are sometimes referred to as “greenhouse gases.” The most important greenhouse gas is carbon dioxide, emitted by the burning of fossil fuels and the clearing of forests. How does global warming affect animals? There is no doubt whatsoever that global warming is affecting the whole planet. 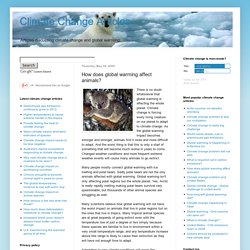 Climate change is forcing every living creature on our planet to adapt to climate change. As the global warming impact becomes stronger and stronger, animals find it more and more difficult to adapt. And the worst thing is that this is only a start of something that will become much worse in years to come. Changed weather conditions and more frequent extreme weather events will cause many animals to go extinct. Sea Temperature Rise. As climate change has warmed the Earth, oceans have responded more slowly than land environments. 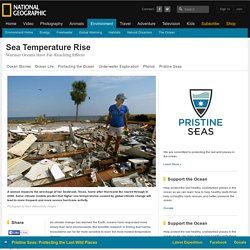 But scientific research is finding that marine ecosystems can be far more sensitive to even the most modest temperature change. Global warming caused by human activities that emit heat-trapping carbon dioxide has raised the average global temperature by about 1°F (0.6°C) over the past century. In the oceans, this change has only been about 0.18°F (0.1°C). This warming has occurred from the surface to a depth of about 2,300 feet (700 meters), where most marine life thrives.

Perhaps the ocean organism most vulnerable to temperature change is coral. Other organisms affected by temperature change include krill, an extremely important link at the base of the food chain. Higher Sea Levels When water heats up, it expands. Stronger Storms These stronger storms can increase damage to human structures when they make landfall.