How we discovered a hidden world of fungi inside the world’s biggest seed bank. This was the moment of truth. 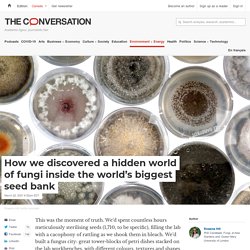 We’d spent countless hours meticulously sterilising seeds (1,710, to be specific), filling the lab with a cacophony of rattling as we shook them in bleach. We’d built a fungus city: great tower-blocks of petri dishes stacked on the lab workbenches, with different colours, textures and shapes of fungi all emerging inside. We’d extracted enough DNA that the freezer, stuffed full of tubes, threatened to revolt. Finally the time had come for me to analyse all the data, and discover just what we’d managed to find after all these months of work. In the first study of its kind, to our knowledge, in a major seed bank, we found hundreds of fungi hidden inside seeds from the Millennium Seed Bank, some of which are likely to be species new to science and could be crucial for the future of plant health. I can’t remember the moment when I first decided to study fungi.

I really can’t emphasise enough how much of an oversight this is. Virtual Tour: Singapore Botanic Gardens Seed Bank. Safeguarding a global seed heritage from Syria to Svalbard. 1.Frankel, O. 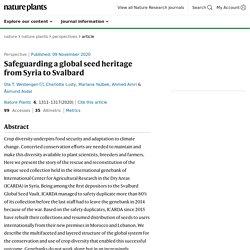 Centuries After Their Loss and Theft, Native American Seeds Are Reuniting With Their Tribes. The squash had traveled a thousand miles to rest quietly on Henrietta Gomez’s arms. 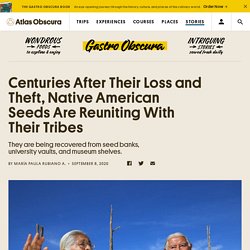 Conservation Roles of the Millennium Seed Bank and the Svalbard Global Seed Vault - Crop Wild Relatives and Climate Change. Investing in Sorghum’s Retirement Plan - Seed World. Finding more genetic diversity in sorghum is an investment today that will payout in the long run. 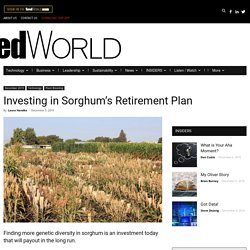 For Sarah Sexton-Bowser, managing director for the Center for Sorghum Improvement, genetic diversity in cash-crop germplasm is analogous to a retirement portfolio. She shares that an investment in crop diversity today will pay dividends in the future. “When I think about the crops I plant on my farm or the types of investments I help farmers make in sorghum as a crop, it isn’t a lot different than my retirement investment portfolio,” she says. “We need to be investing in and developing sorghum genetics that have near-term deliverables, understanding how sorghum as a crop is best managed and fits into a cropping system for sustainability, and also targeting what longer-term investments in genetic improvement will provide.”

The Seed Queen of Palestine. In the fields and terraces of the occupied West Bank, a Palestinian woman is leading a quiet revolution. 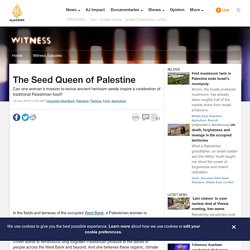 Vivien Sansour is distributing rare, ancient heirloom seeds to Palestinian farmers. Inspired by memories of her grandmother and the delicious food of her childhood, Vivien wants to reintroduce long forgotten Palestinian produce to the tables of people across the West Bank and beyond. And she believes these organic, climate change-resistant seeds are the key to that. She experiments with growing the treasured seeds in her own garden beside the separation wall, under the watchful eye of Israeli soldiers. Popular local herbs and seasonal vegetables flourish as she tends to her garden with expert care and dreams of reviving and celebrating Palestinian food culture.

But can she persuade farmers struggling with the pressures imposed by the Israeli occupation and agri-business to embrace such traditional crop-growing methods? By Mariam Shahin. The Sobering Details Behind the Latest Seed Monopoly Chart. Botanic Gardens Complement Agricultural Gene Bank in Collecting and Conserving Plant Genetic Diversity. Atlasobscura. Housed in the nondescript office buildings of the Ethiopian Biodiversity Institute are a series of cryogenic vaults that, together, contain the largest and most important collection of plant seeds in sub-Saharan Africa. 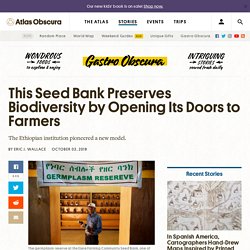 Located in the capital city of Addis Ababa, the facility stores seeds for more than 62,000 varieties of native plants related to horticultural production alone. When it was founded in the early-1980s, the EBI became the world’s first living seed bank. This is in contrast to the Svalbard Global Seed Vault, which is housed underneath thick ice not far from the North Pole, and is essentially a bunker meant to protect seedstocks against global calamity.

By partnering with local farmers, the EBI instead “stores” a minimum of 40,000 additional varieties by keeping them alive and growing in fields. Worede says the approach is particularly important for a developing nation like Ethiopia, which features a cornucopia of native crop diversity. The Archibald Archive. The Archibald Archive - introduction (further links below) James Cartledge Archibald, born in Scotland in 1941, began his obsession with plants at an early age, exhibiting plants and winning prizes at SRGC shows. 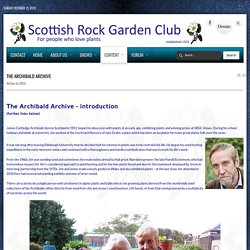 During his school holidays and while at university, Jim worked at the Inschriach Nursery of Jack Drake; a place which has been an incubator for many great plants-folk over the years. It was not long after leaving Edinburgh University that he decided that his interest in plants was to be central in his life. Scientists-race-to-bank-seeds-before-rainforests-die-20180809-p4zwl6. 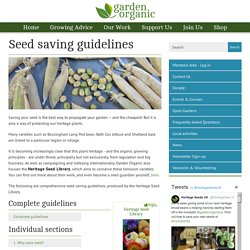 But it is also a way of protecting our heritage plants. Many varieties such as Bossingham Long Pod bean, Bath Cos lettuce and Shetland kale are linked to a particular region or village. It is becoming increasingly clear that this plant heritage - and the organic growing principles - are under threat, principally but not exclusively, from regulation and big business. As well as campaigning and lobbying internationally, Garden Organic also houses the Heritage Seed Library, which aims to conserve these heirloom varieties. What happens to tree seeds at the MSB? A seed's-eye view of the Millennium Seed Bank - Woodland Trust. Crop Wild Relatives. Category : Feature Stories, News Published : March 16, 2017 - 3:22 PM. 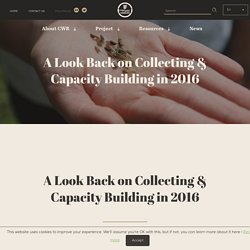 Opening the Boyacá Seed Bank in Colombia. Samara. A seed bank for Thailand. 'Test tube trees': An insurance policy against extinction? Media playback is unsupported on your device A tiny oak tree emerges from a test tube in the laboratory. 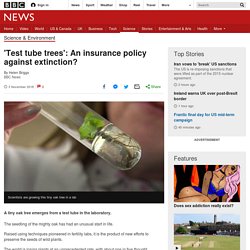 How many genebanks are there in the world? The UN Statistics Division (UNSD) is responsible for bringing together data on the Sustainable Development Goals, and does a generally pretty good job of explaining the just-agreed targets and indicators on its new(ish) website. Let’s remind ourselves that Goal 2 is: “End hunger, achieve food security and improved nutrition and promote sustainable agriculture.” And that Target 2.5 and its associated indicators are as follows: The UNSD website presents the challenge under the heading: Increased efforts are needed to achieve the 2020 target on maintaining genetic diversity. But what’s the baseline? Here’s what it has to say specifically on genebanks (Indicator 2.5.1): By the end of 2016, 4.7 million samples of seeds and other plant genetic material had been conserved in 602 gene banks across 82 countries and 14 regional and international centres.

There’s even a graph: Have 1,148 genebanks up and disappeared? Seed Collections. How a Seed Bank, Almost Lost in Syria’s War, Could Help Feed a Warming Planet - The New York Times. Arks of the Apocalypse. Facts About the Global Seed Vault. Sometimes called the "doomsday vault," the Svalbard Global Seed Vault is seen as humanity's last hope against extinction after a world crisis. Though its mission is to keep the world's seeds safe, its creation wasn't meant as a way to reseed the world after a world-scale catastrophe. The Svalbard Global Seed Vault was the brainchild of Cary Fowler, a scientist, conservationist and biodiversity advocate. Though there are more than 1,700 genebanks around the world that keep collections of seeds, they are all vulnerable to war, natural disasters, equipment malfunctions and other problems.

In 2003, Fowler started to envision a backup storage facility where all of the world's seeds could be stored as safely as possible. In 2008, Fowler's idea was realized and the Global Seed Vault was built, carved nearly 500 feet (152 meters) into the side of a mountain. The gloomy Arctic seed bank that's key to future crops. What happens if war or global warming threaten the key plants that the world depends on for food? A consortium of scientists is running what it believes is an answer: a deep-freeze for thousands of seed samples that is meant to serve as a back-up to cope with the worst-case scenarios.

The magic of Svalbard. A short distance from the North Pole, there is a Norwegian island called Spitsbergen. On this remote piece of dry land in the very boreal archipelago of Svalbard is the Global Seed Vault, the world’s underground seed store. Within the concrete walls of a warehouse built to withstand even a nuclear war are endangered seeds from around the world. Among them, until four years ago, there were 40 ancient black Peruvian corn grains that a student of agronomy from Cremona — only 16 years old — has now seen fit to make the cornerstone of his company: the agricultural startup of Carlo Maria Recchia.That sounds easy enough, but Carlo Maria, selected by Coldiretti Giovani as one of Italy’s the most promising young farmers, had to insist to get those seeds, and not a little either.

First, with his school, and then through the Ministry of Agriculture. “Then I spent two years multiplying the seeds so I could start to farm,” Carlo told The Food Makers. Whatever. Arctic stronghold of world’s seeds flooded after permafrost melts. It was designed as an impregnable deep-freeze to protect the world’s most precious seeds from any global disaster and ensure humanity’s food supply forever. O Canadian genebank, we stand on guard for thee – Agricultural Biodiversity Weblog. The rain in Spain falls mainly on genebank accessions. The last couple of weeks have been all go. Last week I was at IRRI in the Philippines, but I’ve blogged about that genebank before here, so I won’t say much more about it now, save that they have a cool new automated seed sorter.

Using the World's Oldest Apple Trees to Supply New Ones. Posted by Dennis O'Brien, Public Affairs Specialist, Agricultural Research Service in Research and Science Mar 15, 2017 Considering the many different types of apples we see at farmers markets and supermarkets, it may be hard to believe that apple trees are not as diverse as they should be.

Five million US seeds banked for resurrection experiment. Michael Marquand/Getty The Joshua tree (Yucca brevifolia) is one of dozens of species in the Project Baseline seed bank. In a vault kept at −18 °C in Fort Collins, Colorado, more than 5 million seeds now lie frozen in time — destined to wait for up to 50 years until evolutionary scientists earn permission to experiment with them. Unlike most seed banks, which aim to protect biological diversity, Project Baseline is designed to enable precise, controlled studies of how plants are evolving in response to climate change and environmental degradation. Seed Central. Meet the Scientists Hunting and Saving Wild Sunflower Seeds. Plant physiologist Laura Marek collects wild sunflowers and stores their seeds at the USDA's Plant Introduction Station in Ames, IA.

We're crawling along Highway 95, just south of Hanksville, Utah, when Laura Marek spots it: a flash of yellow amid the region’s red and ochre sandstone cliffs. “There! Up that draw!” Seeds for life.