In one graph, why the #ParisAgreement is useless. Activists think the world will be uninhabitable for our children if the U.S. pulls out of the Paris Climate Accord. 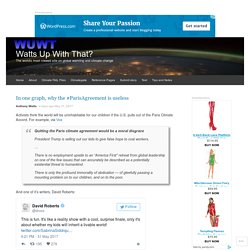 For example, via Vox President Trump is selling out our kids to give false hope to coal workers. Obama Will Use Nixon-Era Law to Fight Climate Change. President Barack Obama is preparing to tell all federal agencies for the first time that they should consider the impact on global warming before approving major projects, from pipelines to highways. 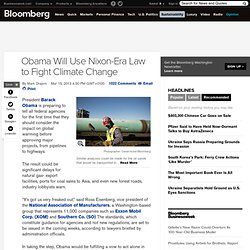 The result could be significant delays for natural gas- export facilities, ports for coal sales to Asia, and even new forest roads, industry lobbyists warn. “It’s got us very freaked out,” said Ross Eisenberg, vice president of the National Association of Manufacturers, a Washington-based group that represents 11,000 companies such as Exxon Mobil Corp. (XOM) and Southern Co. The Hedonistic Left and Global Warming. All the fretting over "the future" from global warming alarmists is a little hard to take, given that they normally support live-for-today hedonism. 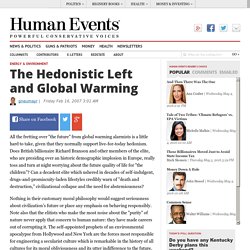 Does British billionaire Richard Branson and other members of the elite, who are presiding over an historic demographic implosion in Europe, really toss and turn at night worrying about the future quality of life for "the children"? Can a decadent elite which ushered in decades of self-indulgent, drugs-and-promiscuity-laden lifestyles credibly warn of "death and destruction," civilizational collapse and the need for abstemiousness? Nothing in their customary moral philosophy would suggest seriousness about civilization’s future or place any emphasis on behaving responsibly. JoNova. Weather Channel Founder Slams Global Warming: "The Theory Has Failed" If Bill Nye had his way, Weather Channel founder John Coleman would be heading for jail. 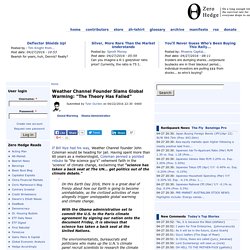 Having spent more than 60 years as a meteorologist, Coleman penned a pointed rebuke to "the science guy's" vehement faith in the 'science' of climate change, exclaiming that "science has taken a back seat at The UN... get politics out of the climate debate. " On this Earth Day 2016, there is a great deal of frenzy about how our Earth is going to become uninhabitable, as the civilized activities of man allegedly trigger unstoppable global warming and climate change. With the Obama administration set to commit the U.S. to the Paris climate agreement by signing our nation onto the document Friday, it is obvious that science has taken a back seat at the United Nations.

Watch Bill Nye Put His Climate Money Where His Mouth Is. Bill Nye, an outspoken proponent of man-made climate change, has taken on meteorologist and well-known climate denier Joe Bastardi in a new StarTalk video. 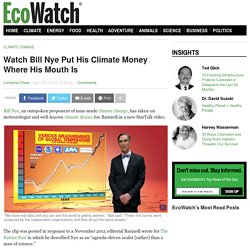 The clip was posted in response to a November 2015 editorial Bastardi wrote for The Patriot Post in which he described Nye as an “agenda-driven zealot [rather] than a man of science.” The WeatherBell chief forecaster also challenged “The Science Guy” to the following three points: 1. Explain why there’s no linkage in the entire known CO2-temperature history of the planet. 2. 3. Nye not only took on Bastardi’s challenge, he’s also putting a total of $20,000 on the line that 2016 will be in the top 10 hottest years ever recorded and that 2010-2020 will be the hottest decade ever recorded.

“So when you start when it’s warm of course it’s going to go down a little bit at first,” he said. Nye then quotes Upton Sinclair who said, “It’s hard to get a man to believe something when his salary depends on his not believing it.” Bill Nye vs. NOAA/NASA Scumbags About To Claim Hottest Year Ever. NOAA/NASA Scumbags About To Claim Hottest Year Ever Eastern Europe, Russia, Asia and Alaska are being pummeled with their second straight winter of record cold and snow, and NOAA is about to announce that 2012 is the hottest year ever in the US – based on massively tampered data which in no way resembles the thermometer readings it is derived from. 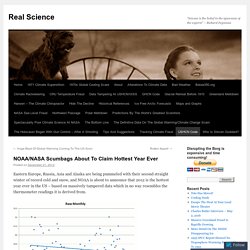 NASA GISS: Science Briefs: Whither U.S. Climate? Fig.D.gif (513×438) Like this: Like Loading... NOAA Climate Science Probe: Cover-up or "Weapon of Mass Distraction"? In the past month, congressional Republicans have subpoenaed the National Oceanic and Atmospheric Administration to gain access to the private documents and emails of scientists involved in a landmark climate change study to look for evidence of alleged wrongdoing. 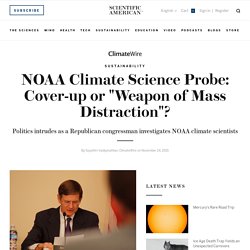 The attempts, by Chairman Lamar Smith (R-Texas) of the House Science, Space and Technology Committee, timed before COP-21 talks in Paris next month to negotiate a new global climate change agreement, have prompted some comparisons to Climategate. During that November 2009 scandal, the private emails of climate scientists at the University of East Anglia in England were hacked and released, and their words were cherry-picked to suggest a global warming conspiracy. “This entire fiasco reminds me of another hype-driven, fact-lacking conspiracy: the so-called ‘Climategate,’” wrote Rep. Eddie Bernice Johnson (D-Texas), ranking member of the committee in a letter to Smith.