Positives and negatives of global warming. Here’s a list of cause and effect relationships, showing that most climate change impacts will confer few or no benefits, but may do great harm at considerable cost. 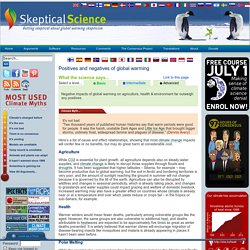 Agriculture While CO2 is essential for plant growth, all agriculture depends also on steady water supplies, and climate change is likely to disrupt those supplies through floods and droughts. It has been suggested that higher latitudes – Siberia, for example – may become productive due to global warming, but the soil in Arctic and bordering territories is very poor, and the amount of sunlight reaching the ground in summer will not change because it is governed by the tilt of the earth.

Global Warming Impacts. To fully appreciate the urgency of climate change, it's important to understand the ways it affects society and the natural environment. 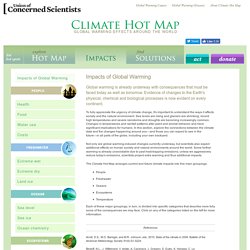 Sea levels are rising and glaciers are shrinking; record high temperatures and severe rainstorms and droughts are becoming increasingly common. Changes in temperatures and rainfall patterns alter plant and animal behavior and have significant implications for humans. In this section, explore the connections between the climate data and the changes happening around you—and those you can expect to see in the future—in all parts of the globe, including your own backyard. Not only are global warming-induced changes currently underway, but scientists also expect additional effects on human society and natural environments around the world. Some further warming is already unavoidable due to past heat-trapping emissions; unless we aggressively reduce today's emissions, scientists project extra warming and thus additional impacts. References Arndt, D.S., M.O. Climate Change Impacts & Threats.

Climate change is already beginning to transform life on Earth. 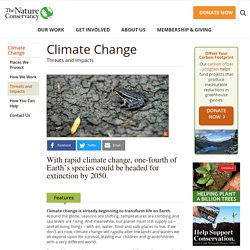 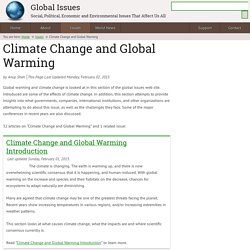 Introduced are some of the effects of climate change. In addition, this section attempts to provide insights into what governments, companies, international institutions, and other organizations are attempting to do about this issue, as well as the challenges they face. Some of the major conferences in recent years are also discussed. Environmental Defense Fund.

Because there are so many impacts of climate change, scientists have broadly categorized them into three areas: Erratic climate and weather extremesAltered ecosystems and habitatsRisks to human health and society 1.The primary impact: Earth's water systems thrown off balance Photo credit: NOAA Hurricane Katrina, a massive Category 5 storm, caused widespread destruction in 2005. 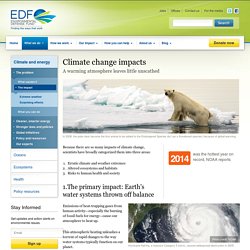 Emissions of heat-trapping gases from human activity—especially the burning of fossil fuels for energy—cause our atmosphere to heat up. This atmospheric heating unleashes a torrent of rapid changes to the way water systems typically function on our planet. For example: The cryosphere—the frozen water on Earth—is melting. 2. Photo credit: Digital Vision. A Student's Guide to Global Climate Change. Global Warming Impacts. Impacts of global warming and climate change. What does a 0.76°C temperature rise mean? 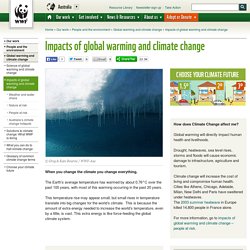 More hot days More severe storms, floods, droughts and fire Higher sea levels This small temperature rise could threaten human health, lives, industries and jobs. Global warming threatens agricultural production, fresh water supplies and the survival of native species and ecosystems. This small temperature rise also means we can expect: More hurricanes and cyclones in the Caribbean, the United States and Burma More extensive droughts in eastern Africa, Australia, southern Europe and parts of China and India More devastating floods like those in Pakistan (in 2010), Brazil and Australia (in 2011), and other parts of the world The impacts of a warming world are concerning enough when considered one by one, but the view worsens when you consider them collectively.

The Intergovernmental Panel on Climate Change (IPCC), which includes more than 1,300 scientists from the United States and other countries, forecasts a temperature rise of 2.5 to 10 degrees Fahrenheit over the next century. Future effects U.S. regional effects Northeast. The Effects of Global Warming. Impacts of Global Warming on the Environment. Findings from the 2007 IPCC report The 2007 IPCC report examined data on numerous changes to natural systems that have already been observed, as well as the potential for future impacts. 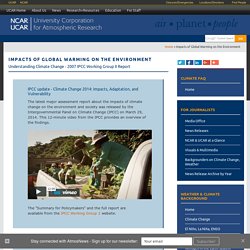