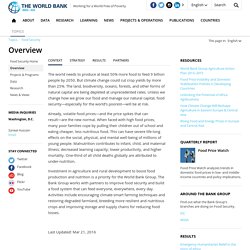 For IBRD/IDA, assistance to agriculture and related sectors rose to $4.7 billion, up from 4.3 billion in FY14 from $3.6 billion in FY13. The International Finance Corporation’s (IFC) investments were 3.2 billion. Altogether, the commitments meet the Bank Group target of $8 to $10 billion. World Bank IBRD/IDA agricultural assistance to Sub-Saharan Africa ($1.4 billion) and South Asia ($1.6 billion) was particularly strong. The world faces widespread food shortages due to global warming. Widespread water shortages caused by rising global temperatures could lead to food shortages and mass migration, an expert has warned. 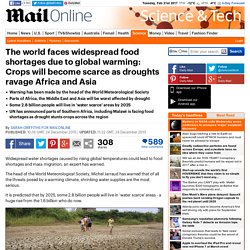 The head of the World Meteorological Society, Michel Jarraud has warned that of all the threats posed by a warming climate, shrinking water supplies are the most serious. It is predicted that by 2025, some 2.8 billion people will live in 'water scarce' areas - a huge rise from the 1.6 billion who do now. World may not have enough food to eat by 2050: Report. Hoang Dinh Nam | AFP | Getty Images Farmers harvest rice on a field next to residential buildings on the outskirts of Hanoi on October 13, 2014. 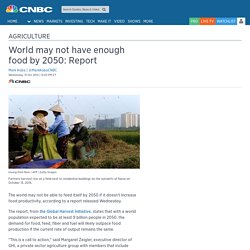 The world may not be able to feed itself by 2050 if it doesn't increase food productivity, according to a report released Wednesday. The report, from the Global Harvest Initiative, states that with a world population expected to be at least 9 billion people in 2050, the demand for food, feed, fiber and fuel will likely outpace food production if the current rate of output remains the same. "This is a call to action," said Margaret Zeigler, executive director of GHI, a private sector agriculture group with members that include Monsanto, John Deere, DuPont and the World Wildlife Fund.

"Countries need to prioritize agriculture and the growing of food in more sustainable methods," Zeigler argued. Global Opportunity Network. Food is the fuel for life, allowing people to live in good health and with dignity. 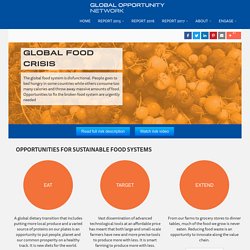 Food security is a prerequisite for building the next generation of human capital in any country, and the right to adequate food is an internationally recognized human right. But, for many, it remains a right only on paper. Australian International Food Security Centre. FoodSecurity web. SecondBite Fact Sheet Series Food Insecurity. Food security – News, Research and Analysis – The Conversation – page 1.

Reflections on World Wetland Day on how this precious resource can be used sustainably to reduce rural poverty, improve food security and strengthen livelihood in the face of climate change. 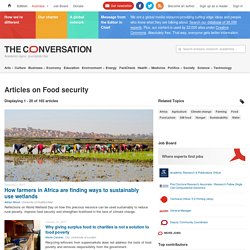 Recycling leftovers from supermarkets does not address the roots of food poverty and removes responsibility from the government. Coastal indigenous peoples consume nearly four times more seafood per capita than the world average and have strong cultural ties to the sea. Global ocean policies should preserve these connections. Food, water and climate are complex, interconnected systems that when disrupted can cause severe social and political shocks. Researchers are developing biological tools that can boost crop yields to feed a growing world population without harming human health or the environment. Rich countries waste a lot of food. Australia's wheat harvest has stalled over the past 26 years, and worsening weather is to blame. International law should include an offence of 'creating a famine'. Food Security Sustainable Agriculture and Global Poverty - Caritas Australia. Although the world produces enough food to feed every woman, man and child, nearly one billion people go hungry every day. 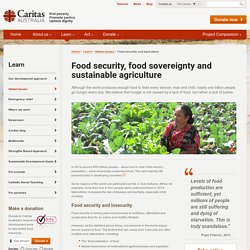 We believe that hunger is not caused by a lack of food, but rather a lack of justice. Levels of food production are sufficient, yet millions of people are still suffering and dying of starvation. This is truly scandalous.” Pope Francis, 2013 In 2014 around 805 million people – about one in nine of the world’s population – were chronically undernourished. Some regions of the world are particularly at risk: in Sub-Saharan Africa, for example, more than one in four people were undernourished in 2014. Feeding a Hungry Nation: Climate change, food and farming in Australia - Climate Council. The price, quality and seasonality of Australia’s food is increasingly being affected by climate change with Australia’s future food security under threat, our new report has revealed. 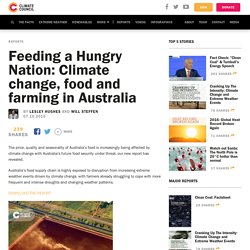 Australia’s food supply chain is highly exposed to disruption from increasing extreme weather events driven by climate change, with farmers already struggling to cope with more frequent and intense droughts and changing weather patterns. Key Findings 1. Climate Impacts on Food Security. During the last two decades, 200 million have been lifted out of hunger and the prevalence of chronic malnutrition in children has decreased from 40 to 26 percent. 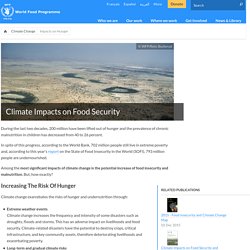 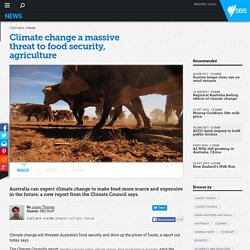 The Climate Council’s report, Feeding a hungry nation: climate change, food and farming in Australia, says the agriculture industry has suffered and will suffer in future as Australia’s climate continues to change. Rising temperatures and lower rainfall have already affected crop yields in areas of southern Australia, and yields will continue to be affected, the report said. Greater frequency and intensity of extreme weather events, like bushfires, droughts and cyclones will lead to decreased productivity across the agricultural sector, including the livestock and dairy industries. The prospect of reduced agricultural production is a big issue for Australia, where the gross value of all agricultural commodities produced was roughly $50 billion for the calendar year ending June 30, 2014. 5 Ways Climate Change is Challenging our Food Security. Climate Change and Australian Food Security - Future Directions International. 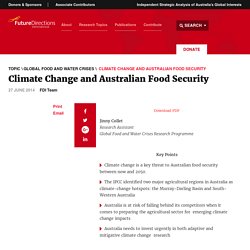