It's Official: 2014 Was the Hottest Year on Record. See Earth’s Temperature Spiral Toward 2°C. The steady rise of Earth’s temperature as greenhouse gases accumulate in the atmosphere and trap more and more heat is sending the planet spiraling closer to the point where warming’s catastrophic consequences may be all but assured. 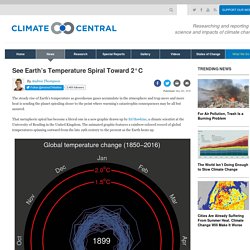 That metaphoric spiral has become a literal one in a new graphic drawn up by Ed Hawkins, a climate scientist at the University of Reading in the United Kingdom. The animated graphic features a rainbow-colored record of global temperatures spinning outward from the late 19th century to the present as the Earth heats up. Monthly global temperatures from 1850-2016. Credit: Ed Hawkins “The pace of change is immediately obvious, especially over the past few decades,” Hawkins, who has previously worked with Climate Central’s extreme weather attribution team, wrote in an email. The graphic is part of Hawkins’s effort to explore new ways to present global temperature data in a way that clearly telegraphs the warming trend. Earth's Long-Term Warming Trend, 1880-2015. 2015 scorched climate records, was hottest year 'by far' - videos. Not only was 2015 the warmest worldwide since 1880, it shattered the previous record held in 2014 by the widest margin ever observed, said the report by the National Oceanic and Atmospheric Administration. 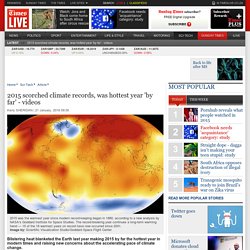 "During 2015, the average temperature across global land and ocean surfaces was 1.62 degrees Fahrenheit (0.90 Celsius) above the 20th century average," said the NOAA report. "This was the highest among all years in the 1880-2015 record. " Compared to 2014, last year was 0.29 degrees Fahrenheit warmer, the "largest margin by which the annual global temperature record has been broken.

" The US space agency NASA, which monitors global climate using a fleet of satellites and weather stations, confirmed that last year broke records for heat in contemporary times. NASA said that the temperature changes are largely driven by increased carbon dioxide and other human-made emissions into the atmosphere. "Climate change is the challenge of our generation," said NASA Administrator Charles Bolden. Warming set to breach 1C threshold. Image copyright Noaa Global temperatures are set to rise more than one degree above pre-industrial levels according to the UK's Met Office. 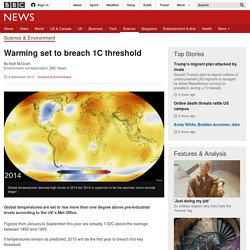 Figures from January to September this year are already 1.02C above the average between 1850 and 1900. If temperatures remain as predicted, 2015 will be the first year to breach this key threshold. The world would then be half way towards 2C, the gateway to dangerous warming. The new data is certain to add urgency to political negotiations in Paris later this month aimed at securing a new global climate treaty. Difficult to measure For researchers, confusion about the true level of temperatures in the 1750s, when the industrial revolution began and fossil fuels became widely used, means that an accurate assessment of the amount the world has warmed since then is very difficult. Global Warming. Global mean land-ocean temperature change from 1880 to 2014, relative to the 1951–1980 mean. 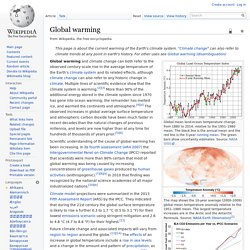 The black line is the annual mean and the red line is the 5-year running mean. The green bars show uncertainty estimates. Source: NASA GISS. The map shows the 10-year average (2000–2009) global mean temperature anomaly relative to the 1951–1980 mean.

Global warming, explained. Here's a list of ongoing changes that climate scientists have concluded are likely linked to global warming, as detailed by the Intergovernmental Panel on Climate Change (IPCC) here and here. 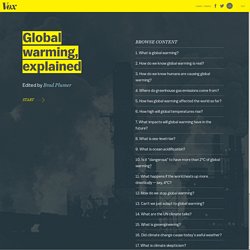 Higher temperatures: Every continent has warmed substantially since the 1950s. There are more hot days and fewer cold days, on average, and the hot days are hotter. Heavier storms: The world's atmosphere can hold more moisture as it warms. As a result, the overall number of heavier storms has likely increased since midcentury, particularly in North America and Europe (though there's plenty of regional variation).

Heat waves: Heat waves have likely become longer and more frequent around the world over the past 50 years, particularly in Europe, Asia, and Australia. Shrinking sea ice: The extent of sea ice in the Arctic has shrunk since 1979, by between 3.5 percent and 4.1 percent per decade, on average. Shrinking glaciers: Glaciers around the world have, on average, been losing ice since the 1970s. Last. Climate change explained in six graphics.