Blades Make the Spinnerbait. The major concept to understand, the key to what makes a spinnerbait work is that blades make the spinnerbait. 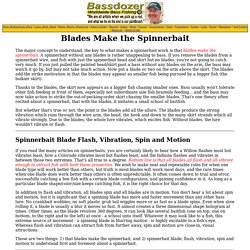 A spinnerbait without any blades is rather unappealing to bass. If you remove the blades from a spinnerbait wire, and fish with just the spinnerbait head and skirt but no blades, you're not going to catch very much. If you just pulled the painted head/skirt past a bass without any blades on the arm, the bass may watch it go by, but may not take much action. Extreme weather more persuasive on climate change than scientists. As one of the Marx brothers famously said: who do you believe, me or your own eyes? 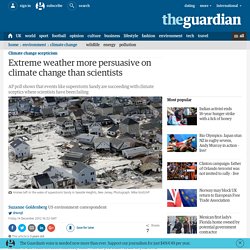 Climate sceptics, it turns out, are much more likely to believe direct evidence of a changing climate in the form of extreme weather events than they do scientists, when it comes to global warming. A poll released on Friday by the Associated Press-GfK found rising concern about climate change among Americans in general, with 80% citing it as a serious problem for the US, up from 73% in 2009. Belief and worry about climate change were rising faster still among people who do tend not to trust scientists on the environment.

Some of the doubters said in follow-up interviews that they were persuaded by personal experience: such as record temperatures, flooding of New York City subway tunnels, and news of sea ice melt in the Arctic and extreme drought in the mid-west. About 78% of respondents overall believed in climate change, a slight rise from AP's last poll in 2009. Travelchannel. 5 Terrifying Statements in the Leaked Climate Report. In the long run, global sea level rise could easily exceed 5 meters.Brendan Howard/Shutterstock Climate Desk has obtained a leaked copy of the draft Intergovernmental Panel on Climate Change's 2013 Summary for Policymakers report, which other media outlets are also reporting on. 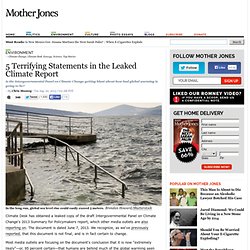 The document is dated June 7, 2013. We recognize, as we've previously reported, that this document is not final, and is in fact certain to change. Most media outlets are focusing on the document's conclusion that it is now "extremely likely"—or, 95 percent certain—that humans are behind much of the global warming seen over the last six decades. But there is much more of note about the document—for instance, the way it doesn't hold back.

In particular, here are five "holy crap" statements from the new draft report: Geo-engineering: green versus greed in the race to cool the planet. The alert on the Climate Ark website in January 2009 was marked urgent: "Take action: A rogue science ship is poised to carry out risky experimental fertilisation of the Southern Ocean. 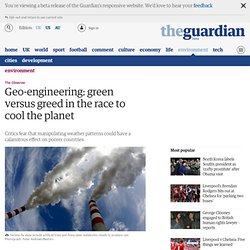 This is likely [to be] the first of many coming attempts to begin geo-engineering the biosphere as a solution to climate change. The chemical cargo is likely to provoke a massive algal bloom big enough to be seen from outer space... " The response was immediate and vitriolic: "You morons," fumed a woman from a Canadian university. "That isn't a rogue ship... it's one of the best marine science research groups in the world. You are no different than anti-science religious fanatics. Professor Peter Liss, then chair of Britain's Royal Society's global environment research committee and himself involved in research to see the effect of iron on phtyoplankton, stepped in: "The [intention] is to find out what role iron plays in marine biogeochemistry. Some hope. Living in fear: move to safer ground is going too slowly. One afternoon in the waning days of winter, the most powerful man in Newtok, Alaska, hopped on a plane and flew 1,000 miles to plead for the survival of his village. 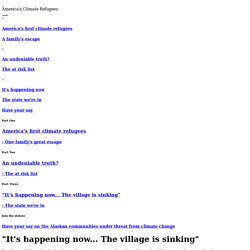 Iron Dumping In The Pacific Ocean Stirs Controversy Over Geoengineering. From Stephanie Pappas, LiveScience Senior Writer: A controversial experiment in which more than 200,000 pounds of iron sulfate were dumped into the Pacific Ocean west of Canada has scientists calling for more transparency in geoengineering. 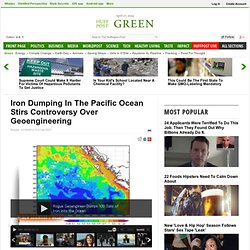 Geoengineering is any deliberate and large-scale manipulation of environmental processes in order to impact Earth's climate. Some geoengineering projects, like the recent one, can have other impacts like boosting fish populations. The project was conducted by a local group, the Haida Salmon Restoration Corporation, under the scientific advice of American businessman Russ George, formerly the CEO of a company called Planktos, Inc. The goal, according to Haida Salmon Restoration Corporation, was to trigger plankton blooms to restore salmon and other fish populations. This geoengineered approach to solving climate change is controversial, but even researchers who think it has promise said the Canadian experiment went about it the wrong way.

The Cheap Way To Deal With Climate Change: Iron Fertilisation Of The Oceans. The man who would stop hurricanes with car tyres. Stephen Salter with his "rainmaker" which is designed to produce rain clouds from sea water. 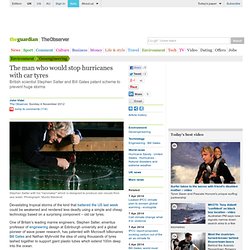 Photograph: Murdo Macleod Devastating tropical storms of the kind that battered the US last week could be weakened and rendered less deadly using a simple and cheap technology based on a surprising component – old car tyres. One of Britain's leading marine engineers, Stephen Salter, emeritus professor of engineering design at Edinburgh university and a global pioneer of wave power research, has patented with Microsoft billionaires Bill Gates and Nathan Myhrvold the idea of using thousands of tyres lashed together to support giant plastic tubes which extend 100m deep into the ocean.