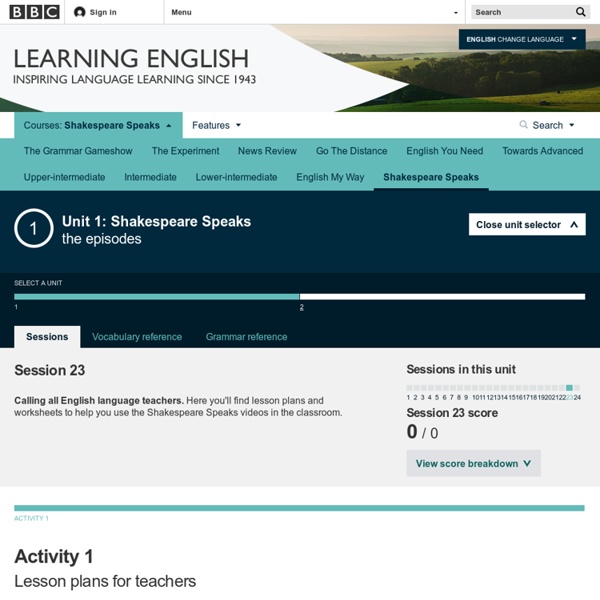 Shakespeare Solos: watch the first six films Adrian Lester, Hamlet ‘To be or not to be’ Adrian Lester performs Hamlet’s soliloquy from act III, scene 1, in which the prince reflects on mortality and considers taking his own life. Joanna Vanderham, Romeo and Juliet ‘The mask of night is on my face’ Joanna Vanderham speaks Juliet’s monologue from the balcony scene in which she insists that her devotion to Romeo is true even if it has been a whirlwind romance.

5 ESL Emergency Lessons Picture this: It’s 8am Monday morning, you’re fast asleep, snuggled in your duvet, enjoying a rare day off. Life is wonderful! Suddenly you are jolted back into reality by a phone call…from work… asking you to sub a class in 30 minutes. Insults by Shakespeare - April Gudenrath The Hip-hop Shakespeare Company is a music theatre production company founded by MOBO-award winning hip-hop artist Kingslee “Akala” Daley, 25. Based in London, THSC offers young people a different view of the arts and ultimately themselves. Through our education programmes, live music events and music theatre productions we engage young people, particularly those who are considered “hard to reach” and push them toward artistic excellence. By bridging music, theatre and performing arts in non-conventional venues we also strive to alter the perceptions of audiences of all ages, creating the ultimate entertainment experience via literature and the arts across the UK and beyond. This year brings the launch of new and exciting additions to THSC: the announcement of our THSC Artist Associate and Peer Leader programme - watch this space!

The full transcript of Michelle Obama's powerful New Hampshire speech My goodness! You guys are fired up! Well, let me just say hello everyone. Shakespeare - Hamlet Hamlet, the Prince of Denmark, has come back from university to find that his father, the old king, is dead. His mother has married his father’s brother, Claudius, who is now king of Denmark. Hamlet is shocked that his mother has married so soon after his father’s death, and angry that she has married Claudius. Soon, a ghost is seen walking on the castle walls.

To be or not to be? Prince Charles has the answer in fun sketch! - FluencyOnline.Com Watch Prince Charles join a stellar cast of actors on stage including Sir Ian McKellen, Dame Judi Dench and Benedict Cumberbatch in a sketch about where to place the emphasis when delivering the lines 'To be or not to be!' from Hamlet. The sketch formed part a program that the Royal Shakespeare Theatre in Stratford-upon-Avon, used to mark the 400th Anniversary of Shakespeare's passing with this unique event. 'The event took place in the presence of their Royal Highnesses the Prince of Wales and the Duchess of Cornwall and celebrated Shakespeare's extraordinary legacy and his enduring influence on all performance art forms - from opera to jazz, dance to musicals.' BBC 2

Shakespeare Lives Working in partnership with the British Film Institute (BFI), we organised an international tour of British films which have reimagined Shakespeare’s work. Our programme ambassador, Sir Ian McKellen, travelled to India, China and Russia to introduce the films at a series of popular public events. We held more than 900 screenings of the BFI film collection, attended by people in over 100 countries, including the residents of a refugee camp in the Kurdistan Region of Iraq. With films viewed over three million times, the collection reinterprets Shakespeare's most famous works while showcasing the diversity and breadth of the UK’s creative sector. Dear Mister Shakespeare, one of the films in the collection, is written by Phoebe Boswell.

Shakespeare's last act: a torrent of twisted fantasies Most of us think of Shakespeare as an Elizabethan. It’s almost impossible not to. Try imagining Shakespeare in Love ending with a cameo appearance by Simon Russell Beale as King James rather than with Judi Dench’s Queen Elizabeth. But Shakespeare was as much a Jacobean writer as he was an Elizabethan one, and to forget that is to distort the trajectory of his career and play down the quite different set of challenges he faced in the decade following the death of Elizabeth in 1603.

“You’re Lying”: a Game to Practise Present Perfect Simple and Past Simple Today I’m really happy to introduce a guest writer to you. Angeles Jimenez is a friend and fellow teacher from EOI Oviedo and, in this blog post, she will be sharing with us an excellent communicative game to consolidate the use of present perfect simple and past simple. Ready for a lot of fun! Do you want your students to keep their noses in the course book? Shakespeare for teens By being intimidated by the multilevel narrative and the stylised language we are missing out on some exceptional teaching materials. By depriving our EFL teens of Shakespeare we are depriving them of some of the most riveting, contemporary stories ever to be told in the English language. In your EFL classroom don’t skip it – exploit it! Don’t dumb it down – jazz it up!

Ten ways in which Shakespeare changed the world Back in 2012, the British Library displayed a rare book that attracted as much media attention as a Gutenberg Bible. It was a mass-produced edition of a text once owned by Nelson Mandela, inked with his pen. Mandela had kept this volume by his bedside for more than 20 years and it had sustained him through his darkest hours on Robben Island.