Words and Phrases Coined by Shakespeare 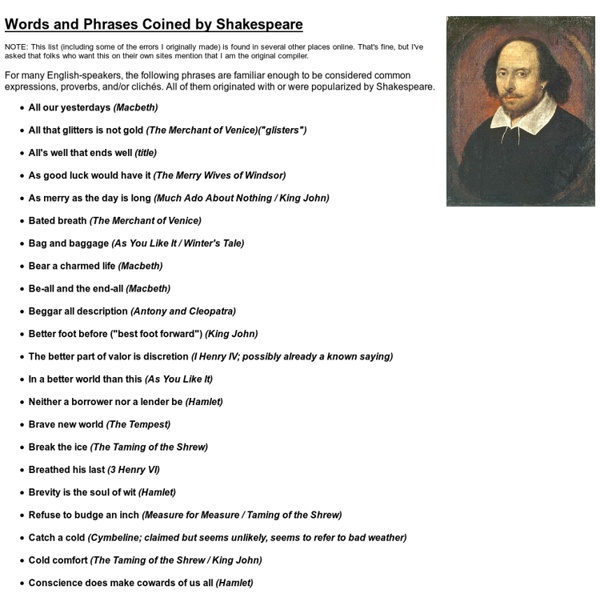 Words and Phrases Coined by Shakespeare NOTE: This list (including some of the errors I originally made) is found in several other places online. That's fine, but I've asked that folks who want this on their own sites mention that I am the original compiler. For many English-speakers, the following phrases are familiar enough to be considered common expressions, proverbs, and/or clichés. All of them originated with or were popularized by Shakespeare. I compiled these from multiple sources online in 2003. How many of these are true coinages by "the Bard", and how many are simply the earliest written attestations of a word or words already in use, I can't tell you. A few words are first attested in Shakespeare and seem to have caused extra problems for the typesetters. The popular book Coined by Shakespeare acknowledges that it is presenting first attestations rather than certain inventions. Words like "anchovy", "bandit", and "zany" are just first attestations of loan-words. Back to Ed's

Related:  Romeo and Juliet • What Shakespeare brought to English. • • Wordsworth

Insults by Shakespeare - April Gudenrath The Hip-hop Shakespeare Company is a music theatre production company founded by MOBO-award winning hip-hop artist Kingslee “Akala” Daley, 25. Based in London, THSC offers young people a different view of the arts and ultimately themselves. Through our education programmes, live music events and music theatre productions we engage young people, particularly those who are considered “hard to reach” and push them toward artistic excellence. By bridging music, theatre and performing arts in non-conventional venues we also strive to alter the perceptions of audiences of all ages, creating the ultimate entertainment experience via literature and the arts across the UK and beyond. This year brings the launch of new and exciting additions to THSC: the announcement of our THSC Artist Associate and Peer Leader programme - watch this space!Akala demonstrates and explores the connections between Shakespeare and Hip-Hop, and the wider cultural debate around language and it's power.

Shakespeare's Globe Globe Theatre Links | Home (picture credit: Utrecht University Library) The sketch at left is perhaps one of the most important in theatrical history. In 1596, a Dutch student by the name of Johannes de Witt attended a play in London at the Swan Theatre. While there, de Witt made a drawing of the theatre's interior. A friend, Arend van Buchell, copied this drawing—van Buchell's copy is the sketch rendered here—and in doing so contributed greatly to posterity.

Did Shakespeare really write his own plays? - Ask History Most scholars accept that William Shakespeare was born in Stratford-upon-Avon, and spent time acting in London before returning to Stratford, where he lived until his death in 1616. But actual documentation of his life is pitifully scarce: little more than several signatures, records of his marriage to Anne Hathaway and the birth of their children, a three-page will and some business papers unrelated to writing. Above all, nothing has been found documenting the composition of the 37 plays and 154 sonnets attributed to him, collectively considered the greatest body of work in the history of the English language. translations of jabberwocky Jabberwocky VariationsHome : Translations NEWEST (November 1998) Endraperós Josep M. Albaigès.

Romeo and Juliet Comic [Grammarman Home] [Romeo and Juliet Menu] [Next Page] Jump to page: [1] [2] [3] [4][5] [6] [7] [8] 'Anonymous' and the great Shakespeare debate Conspiracy theories about large, global events get thrown up time and again. True, it’s easy to be taken in by new evidence, but usually flaws are eventually exposed and these theories then fade away until new ones come along. So in some ways you really have to applaud Roland Emmerich’s new film ‘Anonymous’. Binge-watch is Collins' dictionary's Word of the Year Collins English Dictionary has chosen binge-watch as its 2015 Word of the Year. Meaning "to watch a large number of television programmes (especially all the shows from one series) in succession", it reflects a marked change in viewing habits, due to subscription services like Netflix. Lexicographers noticed that its usage was up 200% on 2014.

Elizabethan Theater - Shakespeare Fun Facts Acting was not a highly paid or highly respected profession. Actors were seen as vagrant troublemakers who promoted hard living and sin. In the 16th century, actors traveled from town to town on a cart, looking for audiences to pay to watch them perform. Playhouses were not constructed in London until 1576. Because acting was not a respected profession, women were not allowed to act until after 1660. Teenage boys who hadn't gone through puberty would play the roles of women, Shakespeare's Coined Words in Depth Words Shakespeare Coined From The Shakespeare Key. Charles and Mary Cowden Clarke. Kanji of the year, meaning 'disaster,' symbolizes 2018 amid natural and human calamities KYOTO – The kanji sai (災, disaster) was picked as the Chinese character best describing this year’s social mood in Japan, amid a string of natural and man-made calamities, a Kyoto-based kanji promotion organization announced Wednesday. Chief Buddhist priest Seihan Mori of the Kiyomizu Temple in Kyoto wrote the character 1.5 meters in length and 1.3 meters in width with a giant calligraphy brush on traditional washi paper at the temple’s annual year-end event, where the kanji of the year was revealed. The selection came after Japan was buffeted this year by torrential rains in the country’s west and an large earthquake in Hokkaido, heightening public awareness of the importance of disaster prevention measures. Japan was also rocked by man-made calamities such as stolen cryptocurrencies and the uncovering of harassment by coaches in the athletic world. The selection of the word was based on characters put forward by the general public.

Baz Luhrmann's "Romeo + Juliet" compared with Shakespeare's Original Work Baz Luhrmann’s kaleidoscopic film adaptation of Romeo and Juliet, while often leaving much to be desired from the two main actors in the way of delivery, presents a fascinating modern interpretation of the 16th century drama. David Ansen, film critic, describes it as “alternately enrapturing and exhausting, brilliant and glib…a "Romeo and Juliet" more for the eyes than the ears” (Newsweek). Sir Philip Sidney states in his Apology for Poetry that poetry should both delight and teach, and both the text and the film serve this purpose well—each suited to the time in which they were presented. Shakespeare incorporated jokes of the time, mentions of royalty, and allusions to historical events in his plays. Luhrmann does this as well, pulling in numerous references to recent pop culture. Both Shakespeare and Luhrmann endeavored to delight their audiences with beautiful costumes and familiar music, and to teach them with the basic moral precepts inherent in the story.