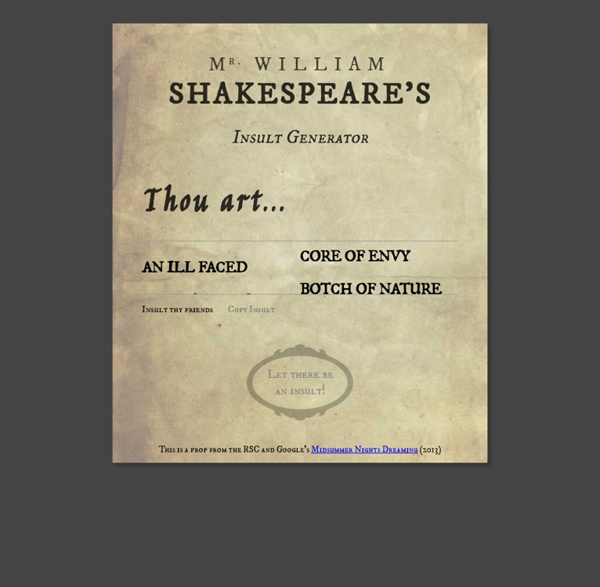 Shakespeare's Unconventional Conventions Slideshow Shakespeare's Unconventional Conventions When the love-struck Romeo first sees Juliet emerge on her balcony, what poetic form could mirror his pounding heart? Iambic pentameter of course. "But, soft! What light through yonder window breaks?" [zoog-muh] Are your verbs slacking off? [en-jam-muhnt, -jamb-] Queen Hermione stands trial in Shakespeare's A Winter's Tale after being falsely accused of adultery by her husband. [lahy-tuh-teez, lit-uh-, lahy-toh-teez] In the third act of Julius Caesar, Marc Antony enters the Roman forum holding Caesar's body. Shakespeare's King Lear is about to end, and with his last lines, the young Edgar looks toward his future as his whole family lies dead around him. [ahy-suh-koh-luhn] Hamlet has just begun; Claudius just married Gertrude after killing her husband his brother. [ant-an-uh-klas-is] [as-uh-nuhns] The Tempest, one of Shakespeare's last plays, is about to end.

Online mysteries to solve: Solve-it Solve-it #009 - The Disastrous Dive The inspector stepped aboard. "What have we got, Lieutenant?" "A woman, dead. A man, missing." Solve-it #008 - The Baffling Break-ins Why had the police chief's house been broken into? Solve-it #007 - The Unresolved Murder Will this unresolved murder finally gets its solution? Solve-it #006 - The Asprey Whites "It will be a pity to sell them," Lady Dudley sighed. Solve-it #005 - The Ghostly Killer It began as a harmless escapade -- four teenagers sneaking into a deserted old house. Solve-it #004 - The "Fallen" Scientist Bad chemistry caused this murder. Solve-it #003 - The Family Feud A mysterious fall and an angry fight between brothers. Solve-it #139 - Noel Necklace Who stole the priceless necklace? Solve-it #140 - Artful Robber Do you know how the heist was pulled off? Solve-it #027 - Lost Weekend Bryce Carlton looked out of place in the dingy stationhouse as he filled out a missing person's form. Solve-it #026 - Houdini Homicide

To Err is Human: Typos in Literature on AbeBooks The Good Earth Pearl S. Buck The first through third printings contain an error on line 17 of page 100 - "flees" should read "fleas". Most readers find typographical errors to be one of life's little annoyances, like being stuck at a traffic light when in a hurry. For others, the publishing of a spelling or grammatical error is one of the most grievous mistakes imaginable. I personally enjoy a particularly silly error, and if it's done right, see it as a value-added perk to a book. Book collectors may also see typographical errors in a positive light, but for an entirely different reason. Most typos are of little consequence - adding or removing pluralization, causing non-agreement in tenses, or the like. Whoops. Anthony Adverse by Hervey Allen, 1933 This edition is marked by several errors such as the misspelling of Xavier (“Xaxier”) on page 352, swapping “ship” for “shop” on page 1086, and repeating the word “found” on page 397. Machine of Death edited by Ryan North, et al, 2010

59 times you quoted Shakespeare without knowing it Do you know how many words Shakespeare invented? Take a look at this list of William Shakespeare quotes and you'll find 59 phrases and words coined by Shakespeare that have lived on in our everyday speech. It's a long list, but you can't have too much of a good thing! 1. Knock knock! Who's there? Here's a knocking indeed! 2. All the world's a stage,And all the men and women merely players;They have their exits and their entrances;And one man in his time plays many parts,His acts being seven ages. 3. At first the infant,Mewling and puking in the nurse's arms;Then the whining school-boy, with his satchelAnd shining morning face, creeping like snailUnwillingly to school. 4. DESDEMONA: [Sings.] EMILIA: 'Tis neither here nor there. 5. My salad days,When I was green in judgment, cold in blood,To say as I said then. 6. It is more than for some, my lord; it is for all—ll I have.He hath eaten me out of house and home; he hath put all mysubstance into that fat belly of his. 7. 8. 9. 10. 11. 12. 13.

14 Shakespeare quotes NOT written by Shakespeare There are probably a few on your Facebook feed right now: flowery Shakespeare quotes about love or life, attributed, for authority, to the world's most famous writer, the "Bard," William Shakespeare. But despite the myriad Shakespeare plays and poems, he didn't write everything, and many popular lines often attributed to him were in fact composed by other playwrights and poets. Read on so you can impress your English major friends or at least avoid a literary blunder. And give credit where it is due. 1. Most people today quote the above line in response to lost romantic love, but it actually comes from Tennyson's poem In Memoriam AHH, in which he grieves his close friend, fellow poet Arthur Henry Hallam, who died suddenly at age 22. 2. The actual line: "Heav'n has no rage, like love to hatred turn’d, / Nor Hell a fury, like a woman scorn'd." The plays of Congreve are considered the greatest achievement of Restoration comedy. 3. 4. 5. 6. 7. 8. 9. The full version: "How do I love thee? 10.