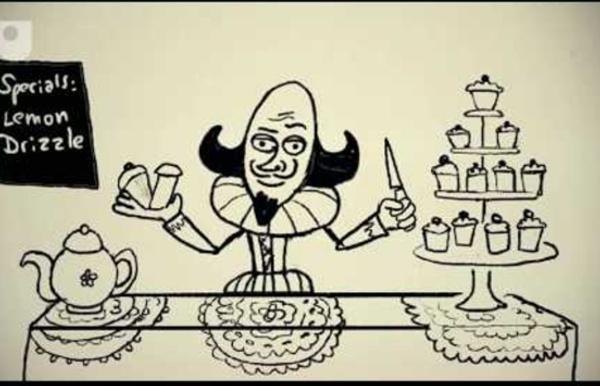 Macbeth - 3d English Shakespeare's influence on the English language. The Sonnets Macbeth To better understand what's going on in Macbeth, read this plot summary before you watch the video Macbeth Anticipation Guide Macbeth Anticipation Guide In Search of Shakespeare . The "Punny" Language of Shakespeare Introduction One of the most difficult challenges of studying Shakespeare is breaking the language barrier. There are several factors that often confuse the reader about the language of Shakespeare: the use of obsolete words, the order of sentence wording, and puns that depended on the meaning, usage, and pronunciation of words. For the first time reader of Shakespeare, the text may seem confusing and hard to translate, but it is important to understand that Shakespeare did indeed write in English, just a slightly different version of what we consider to be modern English.

The Influence of Shakespeare Across the universe of time: Shakespeare’s influence on 21st century society. It is harder to imagine a more universal writer than William Shakespeare. Rarely if ever is one of his many plays not being performed somewhere in the world and similarly rare is the tertiary English student who has not examined his work at length. His plays, sonnets and poems are common fodder for high school English departments across the globe. Shakespeare has perhaps contributed the most to the English language of any writer known to man – literally. Over 1000 words and phrases that he coined as part of his plays and prose are now in common use across the globe.

Free Reading Worksheets Ereading Worksheets has the best reading worksheets on the internet, and they’re all free. These worksheets are skill focused and aligned to Common Core State Standards. You are free to save, edit, and print these worksheets for personal or classroom use. Many of these assignments can now be completed online. You’re going to like this.

How to make Shakespeare easy for English language learners Have you ever had difficulty relating Shakespeare to learners of English? Tutor and resource writer Genevieve White comes to the rescue, in time for Shakespeare Day and English Language Day today. Last year, I wrote an article extolling the joys of teaching Shakespeare to learners of English and outlining the reasons why teachers should bring the Bard into the classroom. Some of the comments I received on this post suggested that the linguistic challenges presented by sixteenth-century English are just too great to overcome. It is true that Shakespeare’s texts may present difficulties for contemporary readers, particularly those who do not have English as a first language. Luckily, however, there are a number of ways in which we can reduce the language barrier between our learners and Shakespeare’s greatest work.

Shakespeare's Grammar May Be The Real Source Of His Genius Read a line from a William Shakespeare play and notice the cadence with which you speak. All of those breaths and pauses from the commas and semicolons spread seemingly sporadically within the flowery language are not just for theatrical drama; they may be the source of Shakespeare's genius. Dr. Jonathan Hope, a reader in English in the Faculty of Humanities & Social Sciences at the University of Strathclyde in Glasgow, Scotland, dedicates a majority of his research to figuring out what makes Shakespeare's prose so, well, poetic. In an article titled "English in the World: History, Diversity, Change," Hope writes about his findings. Through computer-based linguistic analysis, Hope dissects the language of Early Modern literature, with a focus on the works of Shakespeare.

William Shakespeare and his Influence on Modern Language How extensive was Shakespeare's vocabulary? Shakespeare, in his plays, poems, and other writings, used 29,066 unique words. Most people today only use 7,500 to 10,000 unique words in their writing and speech. How did Shakespeare influence modern language? Shakespeare introduced nearly 3,000 words into the English language.

How It Works - GrammarFlip GrammarFlip is a self-paced, instructional program that provides a unique sequence of engaging videos on grammar, mechanics, and usage. Topics and concepts such as parts of speech, parts of the sentence, punctuation, and usage are introduced in relation to each other. This scaffolds learning and solidifies student understanding as the program progresses. At their own pace, students watch instructional videos from home, having the ability to pause and review sections that remain unclear to them. Students then move on to a series of practice exercises which provide instant feedback to reinforce their learning.

Reading ‘Macbeth’ Through the Lens of Ferguson Whom do we trust, and why? This was the question Michael Roethler, an instructional coach in Illinois, posed for a class of sophomores reading “Macbeth.” But first, to help them grapple with it in a context they cared about, he applied it to events surrounding the death of Michael Brown in Ferguson, Mo. Below, his step-by-step process, including the worksheets, photos, articles and editorials he used. Do you teach with The Times? Tell us about it here.