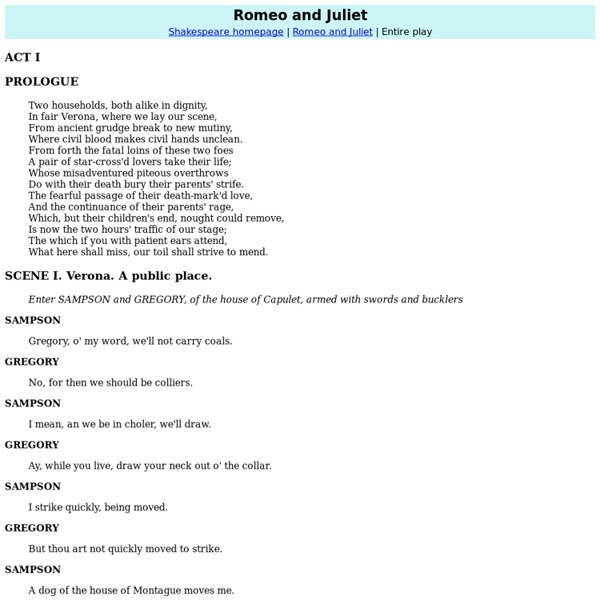 BBC Two - Shakespeare Unlocked - Romeo and Juliet Romeo and Juliet Summary (Click the plot infographic to download.) We start off with a little action: a duel between the servants of two enemy families of Verona: the Montagues and the Capulets. After the swords are sheathed, Verona's Prince shows up to say that the next person who fights is going to get killed, and he means it this time. Along comes Romeo Montague, mooning over some chick named Rosaline. Things take a turn when Romeo meets Juliet. Oh wait. Get ready for some more names: Benvolio, another member of the Montague posse, runs into Tybalt Capulet, who is angry about the Montagues crashing his family party the other night. Juliet hears from the Nurse that her new husband has murdered her cousin, which is a major bummer—but not enough of a bummer to keep her from being super stoked about her wedding night. Meanwhile, back at the Capulet house, Lord Capulet decides a wedding (to Paris) is just the thing to distract Juliet from her grief.

Shakespeare - Romeo and Juliet The story of Romeo and Juliet takes place in Verona in Italy. Two families, the Montagues and the Capulets, hate each other so much that they fight on the street whenever they meet. One of these families, the Capulets, organises a big party so that they can introduce their daughter Juliet to a rich nobleman, Count Paris, who has asked to marry her. Juliet is nearly 14, and her parents are keen for her to marry soon. Romeo is the son of the Montague family, and is also about 14. Romeo and his friends decide that it would be exciting to go to the Capulets’ party too. That night, at the party, Romeo meets Juliet, and they fall in love at first sight. Juliet’s cousin, Tybalt, gets angry very easily. Meanwhile, the Capulets decide that Juliet must marry Count Paris immediately. When the guests arrive for Juliet’s wedding the next day, Juliet’s lifeless body is discovered. When the Capulets and Montagues discover both their children dead, they are united in their sadness.

Welcome to Shakespeare High: Your Shakespeare Classroom on the Internet! Reading Shakespeare's Plays Language Before you start to read Shakespeare's plays, you will want to take a look at some of the language uses that might stand in your way of understanding the script. In his book, Unlocking Shakespeare's Language, Randal Robinson breaks the language barriers into three main categories: Shakespeare's Unusual Arrangements of Words, Shakespeare's Troublesome Omissions & Words Not Quite Our Own. Unusual Word Arrangements Many of my students have asked me if people really spoke the way they do in Shakespeare's plays. I ate the sandwich. Robinson shows us that these four words can create six unique sentences which carry the same meaning. Poetry We speak in prose (language without metrical structure). Blank Verse: unrhymed iambic pentameter.

Full synopsis Romeo and Juliet was written in 1595-6 and is set in Verona, Italy, at a time when a longstanding feud between two noble families - the Montagues and the Capulets - constantly breaks out into brawling on the streets. Prince Escalus, ruler of Verona, threatens terrible punishment on anyone who takes part in further violence. Young Romeo Montague is hopelessly in love with the unattainable Rosaline and, in an attempt to cure his lovesick misery, his friends persuade him to go disguised to a party at the home of his family's sworn enemies, the Capulets. At the party, he meets Juliet, only daughter of the Capulets, and not even knowing each other's names, they fall instantly in love. During the preparations for the party, however, Juliet's mother has told her that Count Paris, a suitable young nobleman (who is also at the party) has asked her father for permission to marry her. Now secretly married to Juliet, Romeo encounters her aggressive cousin, Tybalt, who challenges him to a duel.