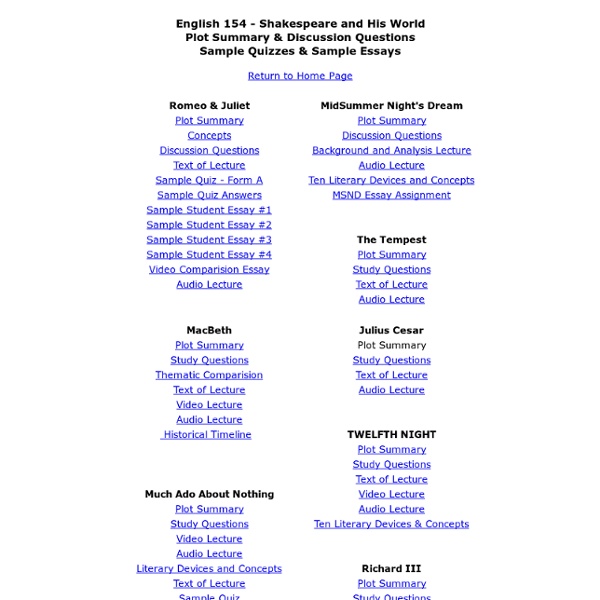 Shakespeare Navigators Absolute Shakespeare - plays, quotes, summaries, essays... ENGL 339 Home Page English 339: Introduction to ShakespeareFall, 2013 Site Navigation PREREQUISITES: GE area A (esp. expository writing, e.g. ENGL 134, and reasoning, argumentation and writing, e.g. ENGL 145); AND GE area C1 (a 200-level literature class, e.g. A WRITING-INTENSIVE, G.E. GWR: As a C4 literature class, ENGL 339 may be taken by students wishing to fulfill the Graduate Writing Requirement (GWR). ENGL 339 is designed to introduce both English or Theatre majors and G.E. students to representative plays of all genres by William Shakespeare, perhaps the finest poet ever to write in English. REQUIRED TEXTS: The SIGNET CLASSICS editions of A Midsummer Night's Dream; Henry V; Macbeth; Hamlet; and The Tempest. NOTE: As You Like It has been dropped from the class this quarter due to the necessity of scheduling a video screening of a film available only on VHS during class time. VIDEO SCREENINGS / PERFORMANCES: Shakespeare's plays were written to be performed -- they were originally seen, not read.

Open Source Shakespeare: search Shakespeare's works, read the texts Essential knowledge and literary terms for understanding Shakespeare. An Award winning You - you- your- your formal and distant form of address suggesting respect for a superior or courtesy to a social equal. Thou - thee - thy - thine informal and close form and can imply either closeness or contempt. Gertrude: Hamlet, thou hast thy father much offended. "Ye/you" or "thou/thee" sometimes show social classes, too. Falstaff: Dost thou hear, hostess? It can be insulting if it was used by an inferior to address a superior social rank.

Why Shakespeare loved iambic pentameter - David T. Freeman and Gregory Taylor | TED-Ed While interesting to explore in his plays, the idea of Shakespeare as a poet isn’t new. He wrote many poems. Most famously, he penned 154 sonnets that are often as studied and celebrated as his plays. If it’s the words themselves that grab you, take a plunge down the rabbit hole of Open Source Shakespeare: a beautiful marriage of the bard and technology that allows you to search every poem and play Shakespeare ever wrote for individual words and phrases. You’ve seen some of the similarities between Shakespeare’s meter and music. If all of this wordplay makes you want to get up on your feet and speak the words, you should research the English Speaking Union’s National Shakespeare Competition – an annual recitation competition featuring some of Shakespeare’s greatest speeches. Want even more Shakespeare?

Enjoying "Macbeth" by William Shakespeare Enjoying "Macbeth", by William Shakespeare by Ed Friedlander, M.D.erf@kcumb.edu This Is NOT "Family Entertainment." Young people who know of Shakespeare from "Shakespeare Gardens" and "Beautiful Tales for Children" may be surprised by what happens in Macbeth. When we first hear of Macbeth, he has just cut an enemy open ("unseamed") from belly button ("nave") to throat ("chops"). The king shouts "Oh valiant cousin! Worthy gentleman!" The Real Macbeth and His Times Shakespeare got his story from Raphael Holinshed's Chronicles. I've read that Holinshed's section on Macbeth was largely derived from the work of one Hector Boece, Scotorum Historiae ("Chronicles of Scotland", 1526-7, translated from Latin into English by a John Bellenden in 1535). It is evidently not online. Here's what we think really happened with Macbeth and the other characters. In a barbaric era, population pressures made war and even the slaughter of one community by another a fact of life. The historical Mrs. Mr. Evil?

Barnes & Noble Shakespeare - Understanding Shakespeare's Language - Barnes & Noble It is silly to pretend that it is easy to read Shakespeare. Reading Shakespeare isn’t like picking up a copy of USA Today or The New Yorker, or even F. Scott Fitzgerald’s Great Gatsby or Toni Morrison’s Beloved. It is hard work, because the language is often unfamiliar to us and because it is more concentrated than we are used to. In the theater it is usually a bit easier. Even experienced readers and playgoers need help. From the very beginning, then, it was obvious that the plays both deserve and demand not only careful reading but continued re-reading—and that not to read Shakespeare with all the attention a reader can bring to bear on the language is almost to guarantee that a reader will not “understand him” and remain among those who “do not like him.” Once we are drawn in, we confront a world of words that does not always immediately yield its delights; but it will—once we learn to see what is demanded of us. Why doesn’t Shakespeare just say what he means? Further Reading N.F.

Romeo & Juliet Using this Guide List of other study guides The notes were prepared for use with an edition of Romeo and Juliet bound together with the book for West Side Story and in conjunction with a showing of Franco Zeffirelli's film version of the play, but they will be useful with any edition or production. The introduction focuses primarily on comparisons with West Side Story, so it has relatively little to say about the play as such. Although Shakespeare's dialogue often reads beautifully enough on the page, please keep in mind that he never intended his words to be read. Shakespeare wrote almost no original plots. Italian cities were infamous for their long-lasting, deadly feuds between prominent families. Prologue Modern taste prefers not to be told right at the beginning of a play how it will end; but many in Shakespeare's audience already knew the story and were looking to enjoy how well it was told, not seeking to be surprised by original plot turns. Act I: Scene 1 Act I: Scene 2

Shakespeare Magazine - For William Shakespeare fans - A free online magazine all about the Bard — Your source for the bard Romeo: courtly lover Courtly lover and madman Commentary Table of Contents | Next page On this page: Introduction Partly because you will be thoroughly familiar with the main line of the plot of Romeo and Juliet, I am going to start my discussion of the play by beating about the bush: I will ask you to look at Romeo before he meets Juliet; at the brilliant but eccentric speech of Mercutio on Queen Mab; at Romeo and Juliet as tragedy; and at some of the many colourful minor characters in the play--then to look again at Romeo and Juliet themselves. Look with some care at the dialogue between Benvolio and Romeo, 1. 1. lines 163-241. Look especially at the near-comic juxtaposition of ideas in lines 174-8, just before Romeo's first apostrophe to Love. Look ahead to the next scene with Romeo (still before he has met Juliet), 1. 2, particularly lines 91-6 where he speaks again in response to Benvolio. Think of Orlando in the first three acts of As You Like It, even perhaps Claudio in Much Ado About Nothing.

Mysterious Engravings Question Authorship of Shakespeare’s Works Engraving from ‘Cryptomenytices et Cryptographiae libri IX’ (all images courtesy Bloomsbury Auctions) William Shakespeare was a commoner who wrote witty plays attended by Queen Elizabeth. Sir Francis Bacon was a noble who served as her Attorney General. Right? Well, if you’re a “Baconian,” someone who reveres Bacon as the true author of Shakespeare’s rhymes, then not exactly. Soon, alleged evidence for that claim — which, for the record, most scholars completely reject — will go under the hammer at a Bloomsbury Auction sale in London on March 19. The volume contains two eyebrow-raising engravings that the Baconian writer Sir Edwin Dunning-Lawrence has said offer hints of Bacon’s involvement. Baconians believe Bacon’s contemporaries were in on the ruse and alluded to it through imagery in their own works. Doubts about the true author of Shakespeare’s plays first surfaced in the mid-1800s and have since fueled an endless production of rabbit trails in journal article form.

A Midsummer Night's Dream Introduction This study guide is intended for GCE Advanced level students in the UK, but is suitable for university students and the general reader who is interested in Shakespeare's plays. Please use the hyperlinks in the table above to navigate this page. Preparing to study This guide is written to support your study of A Midsummer Night's Dream. If you find this guide too hard, then you should perhaps look at the more elementary guide to this play on this site. Go to basic guide to A Midsummer Night's Dream Back to top What other resources should you use? Editions of the text The most authoritative version is the Arden (University Paperbacks) edition, edited by Harold F. Handbooks for literature Useful handbooks for the general study of English literature include The Cambridge Guide to Literature, The Oxford Guide to Literature, J.A. Use these books effectively: do not try to read them for extended periods like a story (unless you have unusual intellectual powers!) Using the Web Structure