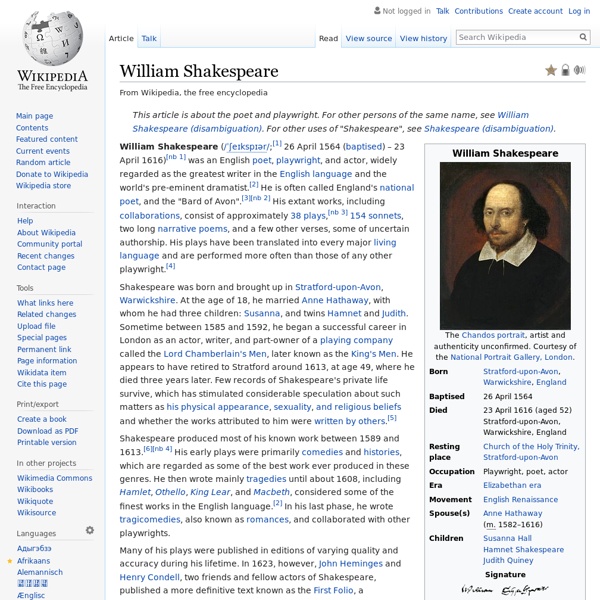 William Shakespeare (/ˈʃeɪkspɪər/;[1] 26 April 1564 (baptised) – 23 April 1616)[nb 1] was an English poet, playwright, and actor, widely regarded as the greatest writer in the English language and the world's pre-eminent dramatist.[2] He is often called England's national poet, and the "Bard of Avon".[3][nb 2] His extant works, including collaborations, consist of approximately 38 plays,[nb 3] 154 sonnets, two long narrative poems, and a few other verses, some of uncertain authorship. His plays have been translated into every major living language and are performed more often than those of any other playwright.[4] Shakespeare produced most of his known work between 1589 and 1613.[6][nb 4] His early plays were primarily comedies and histories, which are regarded as some of the best work ever produced in these genres. Many of his plays were published in editions of varying quality and accuracy during his lifetime. Life Early life London and theatrical career Later years and death man Plays

Honoré Gabriel Riqueti, comte de Mirabeau Honoré Gabriel Riqueti, Count of Mirabeau (9 March 1749 – 2 April 1791) was a leader of the early stages of the French Revolution. A noble, he had been involved in numerous scandals before the start of the Revolution in 1789 that had left his reputation in ruins. Nonetheless, he rose to the top of the French political hierarchy in the years 1789–1791 and acquired the reputation of a voice of the people. A successful orator, he was the leader of the moderate position among revolutionaries by favoring a constitutional monarchy built on the model of Great Britain. When he died (of natural causes) he was a great national hero, even though support for his moderate position was slipping away.

Dante Alighieri Italian poet Durante di Alighiero degli Alighieri (Italian: [duˈrante deʎʎ aliˈɡjɛːri]; Latin: Dantes), commonly known by his pen name Dante Alighieri or simply as Dante (,[1][2] also ,[3] Italian: [ˈdante]; c. 1265 – 1321), was an Italian poet. His Divine Comedy, originally called Comedìa (modern Italian: Commedia) and later christened Divina by Giovanni Boccaccio, is widely considered the most important poem of the Middle Ages and the greatest literary work in the Italian language.[4][5] William Shakespeare William Shakespeare (1564-1616), `The Bard of Avon', English poet and playwright wrote the famous 154 Sonnets and numerous highly successful oft quoted dramatic works including the tragedy of the Prince of Denmark, Hamlet; "Neither a borrower nor a lender be; For loan oft loses both itself and friend, And borrowing dulls the edge of husbandry. This above all: to thine ownself be true, And it must follow, as the night the day, Thou canst not then be false to any man. Farewell: my blessing season this in thee!" --Lord Polonius, Hamlet Act I, Scene 3 While Shakespeare caused much controversy, he also earned lavish praise and has profoundly impacted the world over in areas of literature, culture, art, theatre, and film and is considered one of the best English language writers ever.

Nicolas Chamfort Sébastien-Roch Nicolas, known in his adult life as Nicolas Chamfort and as Sébastien Nicolas de Chamfort (French: [ʃɑ̃fɔʁ]; 6 April 1741 – 13 April 1794), was a French writer, best known for his witty epigrams and aphorisms. He was secretary to Louis XVI's sister, and of the Jacobin club. Biography[edit] Chamfort was born Sébastien-Roch Nicolas, Clermont-Ferrand, Puy-de-Dôme on 6 April 1741, according to a baptismal certificate from Saint-Genès parish in Clermont-Ferrand, to a grocer named Nicolas. On 22 June, a second birth certificate gives him the name "Sébastien Roch" from "unknown parents." A journey to Paris resulted in the boy obtaining a bursary at the Collège des Grassins. Ipse dixit The Roman politician Marcus Tullius Cicero coined the phrase ipse dixit, which translates from the Latin as, "he said it himself" Ipse dixit (Latin for "he said it himself") is an assertion without proof; or a dogmatic expression of opinion.[1] The fallacy of defending a proposition by baldly asserting that it is "just how it is" distorts the argument by opting out of it entirely: the claimant declares an issue to be intrinsic, and not changeable.[2] History[edit]

John Milton 17th-century English poet and civil servant John Milton (9 December 1608 – 8 November 1674) was an English poet and intellectual, who served as a civil servant for the Commonwealth of England under its Council of State and later under Oliver Cromwell. He wrote at a time of religious flux and political upheaval, and is best known for his epic poem Paradise Lost (1667), written in blank verse. Writing in English, Latin, Greek, and Italian, he achieved international renown within his lifetime, and his celebrated Areopagitica (1644), written in condemnation of pre-publication censorship, is among history's most influential and impassioned defences of freedom of speech and freedom of the press. His desire for freedom extended into his style: he introduced new words (coined from Latin) to the English language, and was the first modern writer to employ non-rhymed verse outside of the theatre or translations.

Hamlet Hamlet is Shakespeare's longest play and among the most powerful and influential tragedies in English literature, with a story capable of "seemingly endless retelling and adaptation by others."[1] The play seems to have been one of Shakespeare's most popular works during his lifetime[2] and still ranks among his most-performed, topping the performance list of the Royal Shakespeare Company and its predecessors in Stratford-upon-Avon since 1879.[3] It has inspired writers from Goethe and Dickens to Joyce and Murdoch, and has been described as "the world's most filmed story after Cinderella".[4] Characters[edit] Plot[edit] The scene shifts to "room of state in the castle."

Brutus the Younger Roman politician Brutus was close to General Julius Caesar, the leader of the Populares faction. However, Caesar's attempts to assume greater power for himself put him at greater odds with the Roman elite and members of the Senate. Brutus eventually came to oppose Caesar and fought on the side of the Optimates faction, led by Pompey the Great, against Caesar's forces in Caesar's Civil War. Pompey was defeated at the Battle of Pharsalus in 48 BC, after which Brutus surrendered to Caesar, who granted him amnesty. List of ancient Romans Wikimedia list article This an alphabetical List of ancient Romans. These include citizens of ancient Rome remembered in history. Note that some persons may be listed multiple times, once for each part of the name. See also: List of Roman Emperors – Consuls and other magistrates of Rome – List of famous generals – Roman Emperors - List of distinguished Roman women – List of ancient European doctors

Homer name ascribed by the ancient Greeks to the author of the Iliad and the Odyssey Homer (; Ancient Greek: Ὅμηρος Greek pronunciation: [hómɛːros], Hómēros) is the presumed author of the Iliad and the Odyssey, two epic poems that are the central works of ancient Greek literature. The Iliad is set during the Trojan War, the ten-year siege of the city of Troy by a coalition of Greek kingdoms. It focuses on a quarrel between King Agamemnon and the warrior Achilles lasting a few weeks during the last year of the war. The Odyssey focuses on the ten-year journey home of Odysseus, king of Ithaca, after the fall of Troy.