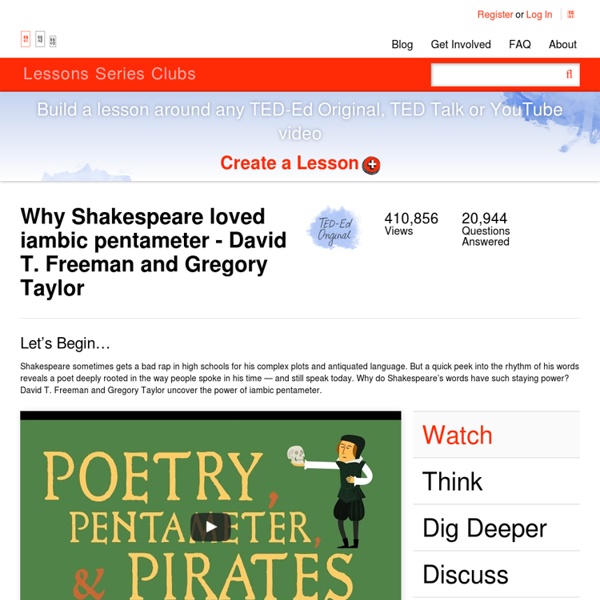 While interesting to explore in his plays, the idea of Shakespeare as a poet isn’t new. He wrote many poems. Most famously, he penned 154 sonnets that are often as studied and celebrated as his plays. His sonnets feature a specific format that uses iambic pentameter to reflect great meaning and emotion in a short burst of verse. If it’s the words themselves that grab you, take a plunge down the rabbit hole of Open Source Shakespeare: a beautiful marriage of the bard and technology that allows you to search every poem and play Shakespeare ever wrote for individual words and phrases. Just how many times does the world “blood” show up in Macbeth? You’ve seen some of the similarities between Shakespeare’s meter and music. If all of this wordplay makes you want to get up on your feet and speak the words, you should research the English Speaking Union’s National Shakespeare Competition – an annual recitation competition featuring some of Shakespeare’s greatest speeches.

Barnes & Noble Shakespeare - Understanding Shakespeare's Language - Barnes & Noble It is silly to pretend that it is easy to read Shakespeare. Reading Shakespeare isn’t like picking up a copy of USA Today or The New Yorker, or even F. Scott Fitzgerald’s Great Gatsby or Toni Morrison’s Beloved. It is hard work, because the language is often unfamiliar to us and because it is more concentrated than we are used to.

Origins of Shakespeare Although he&#xa0;did&#xa0;not&#xa0;invent&#xa0;the sonnet, he did make it popular! William Shakespeare is believed to have influenced the English language more than any other writer in history, popularizing terms and phrases that still appear in everyday conversation and text. Examples include the words “fashionable” (“Troilus and Cressida”), “sanctimonious” (“Measure for Measure”), “eyeball” (“A Midsummer Night’s Dream”) and “lackluster” (“As You Like It”); and the expressions “foregone conclusion” (“Othello”), “in a pickle” (“The Tempest”), “wild goose chase” (“Romeo and Juliet”) and “one fell swoop” (“Macbeth”). Learning English as a Second Language Google + Anyone who is thinking of moving to an English speaking country will clearly be anxious to learn the language, so they can integrate themselves easily. Learning English as a second language opens many doors for people and provides them with a variety of options they might have otherwise gone without. ELS persons will be able to converse freely with people they meet, making getting settled in a new home much easier.

Mysterious Engravings Question Authorship of Shakespeare’s Works Engraving from ‘Cryptomenytices et Cryptographiae libri IX’ (all images courtesy Bloomsbury Auctions) William Shakespeare was a commoner who wrote witty plays attended by Queen Elizabeth. Sir Francis Bacon was a noble who served as her Attorney General. Right? Last Night by The Vamps This is a great song to review past verb tenses with your students. I have used a ‘wordle’ containing verbs only and pictures from the music video for prediction, followed by inserting these verbs in to a gap fill. Students then identify the past tense followed by a discussion about why they are using each specific tense. The lesson wraps up with them recalling the chorus using these verbs and then writing their own chorus. This is just a suggested procedure.

Printouts Home › Classroom Resources › Printouts Go offline with this collection of our best printable sheets from assessments to organizers—all of them classroom-tested and easy to use. Graphic Organizers See All These printouts help students brainstorm, analyze, and organize their ideas. Young Shakespeare picture found - The Royal Secret Young Shakespeare picture found The recent claim that an illustration on the cover of an Elizabethan book of botany and herbalism is of a young 33 year old Shakepeare is to be given coverage in the UK’s prestigious Country Life magazine on 27th May next. As is so often the case with Shakespeare and his works the picture’s authenticity is in dispute. Digital Poets! Web Tools, Apps, & Lesson Ideas – Teacher Reboot Camp “Poetry is when an emotion has found its thought and the thought has found words.” by Robert Frost April is National Poetry month. I invite you to consider the possibilities of teaching with poetry. Poetry makes content come alive, because the poet has a deep connection with the subject matter.

Shakespeare In Business – 10 Quotes That Could Be Applied In Modern Business Photo: Wikimedia Commons Well, it’s that time of year again when the English Language world pay homage to the grand master of the English Language, William Shakespeare on what would be his four hundred and fifty-first birthday! As I was thinking of a post to celebrate Shakespeare’s birthday I wondered to myself whether I could write about Shakespeare in business. Shakespeare in business? Sounds strange, doesn’t it? What could the Bard possibly have written that would have relevance in today’s business world? List of Interactive Quizzes The quizzes with a magenta marble are also listed within the section or digital handout to which they apply. The twenty-one quizzes with a green marble and designated "Practice" have been adapted from the instructor's manual and other ancillary materials accompanying Sentence Sense: A Writer's Guide. They are duplicated here with permission of the author, Evelyn Farbman, and the publisher, Houghton Mifflin Inc. The seventeen quizzes with a gold marble

The search for Shakespeare - mystery "The life of Shakespeare is a fine mystery and I tremble every day lest something should turn up" Charles Dickens (1847) It is the greatest mystery in literature and it's been rumbling on for centuries. Who was William Shakespeare?