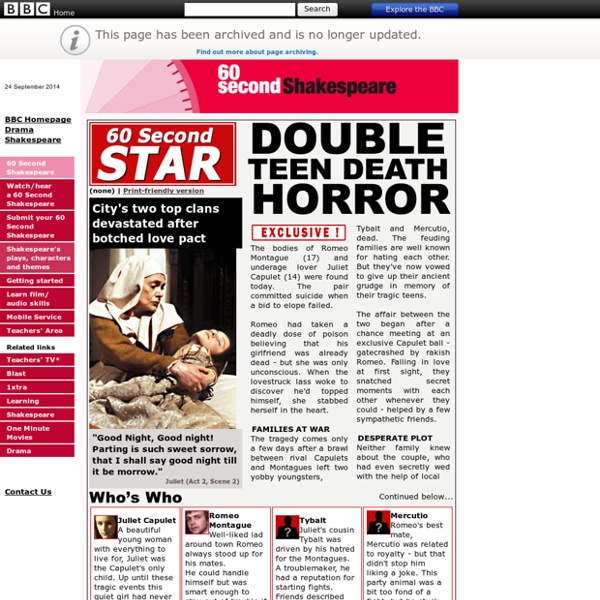 Ten Videos to Teach English Here are ten videos which can help students learn English writing skills. This is a process writing project. Students will need to draft and rewrite at least two versions before a satisfactory piece of writing can be completed. Who was William Shakespeare? William Shakespeare is known across the world as the writer of plays such as Romeo and Juliet and Hamlet, and as one of the most famous British people ever. Sometimes known simply as ‘the Bard’, he lived over four hundred years ago – not bad for the son of a man who made a living from making gloves. Part of the fascination is that despite being so well-known we don’t actually have much information about him; even his name is spelt differently each time it appears, ranging from ‘Shak-peare’ to ‘Shaksper’.

TED Talk Lesson Plans Image credit: ted.com Follow me on twitter @RobbioDobbio This is a lesson plan for C1+ students on the topic of bad habits based around a TED talk by Judson Brewer and an article from Yahoo Health. Window on Britain Test Your Listening Write if the sentences are true or false 1. Most children start primary school at the age of 7. 2.

The Best Online Short Films of 2014 This year was great for ​shorts. Whether you were learning about ​the most dangerous sport o​n earth, what it's like ​to be stuck ​in prison, or what it'd feel like to be part of a ​deadly W​estern joke, there was something for everyone. Presented below is a roundup of some of my favorite short movies from 2014. This list includes older films as long as they were released online this year, and it doesn't include any titles that have already been highlighted in my weekly ​I'm Short, Not Stupid column. Let the short film screening party begin! Shakespeare - Macbeth Scotland is at war, and has just won a great battle. Macbeth, a general in the Scottish army, is the hero of the battle. On his way home afterwards, Macbeth and his friend meet three mysterious witches. Somehow, the witches already know Macbeth’s name.

Film Analysis Paragraph 1: Offer your overall impression of the film while mentioning the movie's title, director, and key actors. Paragraph 2: Summarize the plot of the film Paragraph 3: How did the actors portray key character roles? Shakespeare Skip to content This lesson may be useful as an introductory lesson on Shakespeare. Introduction In this lesson, learners are introduced to Shakespeare as the topic for the lesson and pool the knowledge that they already have about him with a mind map and quiz activities. They then practise question formation and speaking with an information-gap reading activity about Shakespeare's life and legacy and a theatre-themed 'Find someone who' activity.

15 Great Short Films Movies and TV Over the last century, cinema has played an increasingly important role in popular culture, combining visual media, soundtrack, and dialogue to mix together three of the biggest components of art: visual art, music and prose. However, with all the attention given to feature length films, short film is often overlooked. These tiny little gems tell marvelous stories in a distinctly short time, making them the visual equivalent of a good short story, a small morsel that can really be viewed and appreciated without devoting hours of your time. This is by no means the best in short film, because it is possibly even more subjective than feature-length film appreciation, but these 15 shorts are all worth a look. WARNING: Some offensive language, adult themes and mild nudity follow