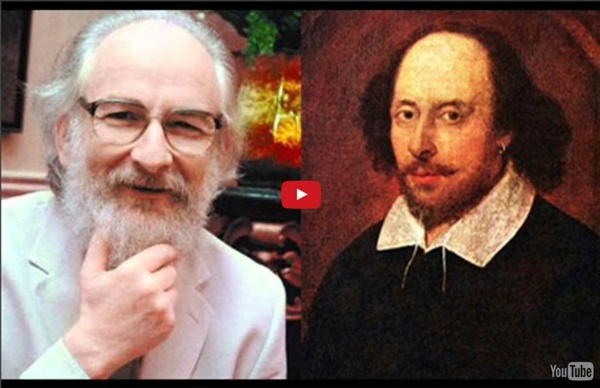 Related:  What Shakespeare brought to English.

Shakespeare's Unconventional Conventions Slideshow Shakespeare's Unconventional Conventions When the love-struck Romeo first sees Juliet emerge on her balcony, what poetic form could mirror his pounding heart? Iambic pentameter of course. "But, soft! [zoog-muh] Are your verbs slacking off? [en-jam-muhnt, -jamb-] Queen Hermione stands trial in Shakespeare's A Winter's Tale after being falsely accused of adultery by her husband. [lahy-tuh-teez, lit-uh-, lahy-toh-teez] In the third act of Julius Caesar, Marc Antony enters the Roman forum holding Caesar's body. Shakespeare's King Lear is about to end, and with his last lines, the young Edgar looks toward his future as his whole family lies dead around him. [ahy-suh-koh-luhn] Hamlet has just begun; Claudius just married Gertrude after killing her husband his brother. [ant-an-uh-klas-is] [as-uh-nuhns] The Tempest, one of Shakespeare's last plays, is about to end.

Shakespeare's Grammar: Rhetorical Devices Previous | Next | Return to Intro Intertwined with syntax, rhetoric exerts another powerful influence on Elizabethan writing. Rhetoric in its original sense means "the art or study of using language effectively and persuasively." While I won't be getting into some of the more obscure terms (is there anyone who isn't frightened by a mouthful of syllables like "paraprosdokian"?), a healthy understanding of poetry's debt to rhetoric is in order. Below is a table of some of the more common devices employed for emphasis in Shakespeare: 1 According to literal interpretation, this example is itself a form of anadiplosis termed "gradatio," in which the anadiplosis is extended in a series of three or more clauses that repeat upon one another. 2 Also termed "antistrophe" or "epiphora," evidently depending upon one's source. 3 When the parallelism involves the same length within the structure (same number of words and/or syllables), this is a device known as "isocolon". 4 The opposite of asyndeton.

Absolute Shakespeare - plays, quotes, summaries, essays... The Top 10 Relationship Words That Aren't Translatable Into English | Marriage 3.0 Here are my top ten words, compiled from online collections, to describe love, desire and relationships that have no real English translation, but that capture subtle realities that even we English speakers have felt once or twice. As I came across these words I’d have the occasional epiphany: “Oh yeah! That’s what I was feeling...” Mamihlapinatapei (Yagan, an indigenous language of Tierra del Fuego): The wordless yet meaningful look shared by two people who desire to initiate something, but are both reluctant to start. Oh yes, this is an exquisite word, compressing a thrilling and scary relationship moment. Yuanfen (Chinese): A relationship by fate or destiny. From what I glean, in common usage yuanfen means the "binding force" that links two people together in any relationship. But interestingly, “fate” isn’t the same thing as “destiny.” Cafuné (Brazilian Portuguese): The act of tenderly running your fingers through someone's hair. Ya’aburnee (Arabic): “You bury me.”

Your Brain In Love | Brains in love - Page 5 • Those who endure have a story, and they stick to it. Robert Sternberg, dean of the school of arts and science at Tufts University, has researched this and has come up with about two dozen relationship stories, some good, some bad. The "fairy tale story" has a prince and a princess; the "visionist story" is a business model, accumulating homes, goods and successful children; the "travel story" says that life is a journey; the "police story" divides the partners' roles into cop and perp, with the former constantly monitoring the latter; the "war story" means that two people expect constant fights. "What our research shows is that couples tend to be more satisfied if they have matching story profiles," Sternberg says. Pair a fairy tale believer with a war story believer and "it won't work," he says. • Anxiety or depression is relationship poison. The best predictor of divorce, Aron says, has little to do with love, even less to do with initial attraction. -- Susan Brink

59 times you quoted Shakespeare without knowing it Do you know how many words Shakespeare invented? Take a look at this list of William Shakespeare quotes and you'll find 59 phrases and words coined by Shakespeare that have lived on in our everyday speech. It's a long list, but you can't have too much of a good thing! 1. Knock knock! Here's a knocking indeed! 2. All the world's a stage,And all the men and women merely players;They have their exits and their entrances;And one man in his time plays many parts,His acts being seven ages. 3. At first the infant,Mewling and puking in the nurse's arms;Then the whining school-boy, with his satchelAnd shining morning face, creeping like snailUnwillingly to school. 4. DESDEMONA: [Sings.] EMILIA: 'Tis neither here nor there. 5. My salad days,When I was green in judgment, cold in blood,To say as I said then. 6. It is more than for some, my lord; it is for all—ll I have.He hath eaten me out of house and home; he hath put all mysubstance into that fat belly of his. 7. 8. 9. 10. 11. Brave thee? 12. 13.

14 Shakespeare quotes NOT written by Shakespeare There are probably a few on your Facebook feed right now: flowery Shakespeare quotes about love or life, attributed, for authority, to the world's most famous writer, the "Bard," William Shakespeare. But despite the myriad Shakespeare plays and poems, he didn't write everything, and many popular lines often attributed to him were in fact composed by other playwrights and poets. Read on so you can impress your English major friends or at least avoid a literary blunder. And give credit where it is due. 1. Most people today quote the above line in response to lost romantic love, but it actually comes from Tennyson's poem In Memoriam AHH, in which he grieves his close friend, fellow poet Arthur Henry Hallam, who died suddenly at age 22. 2. The actual line: "Heav'n has no rage, like love to hatred turn’d, / Nor Hell a fury, like a woman scorn'd." The plays of Congreve are considered the greatest achievement of Restoration comedy. 3. 4. 5. 6. 7. 8. 9. The full version: "How do I love thee? 10.