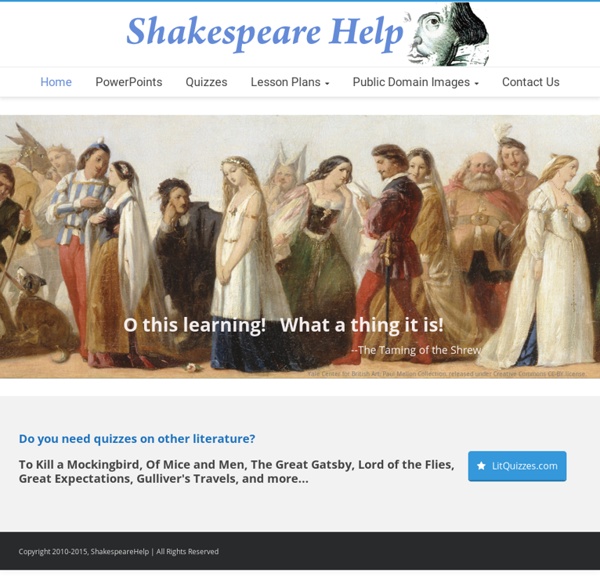 ENGL 339 Home Page English 339: Introduction to ShakespeareFall, 2013 Site Navigation PREREQUISITES: GE area A (esp. expository writing, e.g. ENGL 134, and reasoning, argumentation and writing, e.g. ENGL 145); AND GE area C1 (a 200-level literature class, e.g. A WRITING-INTENSIVE, G.E. GWR: As a C4 literature class, ENGL 339 may be taken by students wishing to fulfill the Graduate Writing Requirement (GWR). ENGL 339 is designed to introduce both English or Theatre majors and G.E. students to representative plays of all genres by William Shakespeare, perhaps the finest poet ever to write in English. REQUIRED TEXTS: The SIGNET CLASSICS editions of A Midsummer Night's Dream; Henry V; Macbeth; Hamlet; and The Tempest. NOTE: As You Like It has been dropped from the class this quarter due to the necessity of scheduling a video screening of a film available only on VHS during class time. VIDEO SCREENINGS / PERFORMANCES: Shakespeare's plays were written to be performed -- they were originally seen, not read.

Open Source Shakespeare: search Shakespeare's works, read the texts Essential knowledge and literary terms for understanding Shakespeare. An Award winning You - you- your- your formal and distant form of address suggesting respect for a superior or courtesy to a social equal. Thou - thee - thy - thine informal and close form and can imply either closeness or contempt. Gertrude: Hamlet, thou hast thy father much offended. "Ye/you" or "thou/thee" sometimes show social classes, too. Falstaff: Dost thou hear, hostess? It can be insulting if it was used by an inferior to address a superior social rank.

Shakespeare Insult Generator: Thou Shall Say It Like Shakespeare Advertisement How would you like to be able to whip out a Shakespeare insult on the fly whenever necessary? This is such an oldie but a goodie. Even though reading Shakespeare might be more painful than poking your eyeballs out with an ice pick, the words in those books are kinda funny. It’s easy to use. There are a few people who have taken this rank elf-skinned clack-dish and turned it into an online version. Shakespeare Navigators Absolute Shakespeare - plays, quotes, summaries, essays... Romeo & Juliet Using this Guide List of other study guides The notes were prepared for use with an edition of Romeo and Juliet bound together with the book for West Side Story and in conjunction with a showing of Franco Zeffirelli's film version of the play, but they will be useful with any edition or production. The introduction focuses primarily on comparisons with West Side Story, so it has relatively little to say about the play as such. Although Shakespeare's dialogue often reads beautifully enough on the page, please keep in mind that he never intended his words to be read. Shakespeare wrote almost no original plots. Italian cities were infamous for their long-lasting, deadly feuds between prominent families. Prologue Modern taste prefers not to be told right at the beginning of a play how it will end; but many in Shakespeare's audience already knew the story and were looking to enjoy how well it was told, not seeking to be surprised by original plot turns. Act I: Scene 1 Act I: Scene 2

BBC History - William Shakespeare Enjoying "Macbeth" by William Shakespeare Enjoying "Macbeth", by William Shakespeare by Ed Friedlander, M.D.erf@kcumb.edu This Is NOT "Family Entertainment." Young people who know of Shakespeare from "Shakespeare Gardens" and "Beautiful Tales for Children" may be surprised by what happens in Macbeth. When we first hear of Macbeth, he has just cut an enemy open ("unseamed") from belly button ("nave") to throat ("chops"). The king shouts "Oh valiant cousin! Worthy gentleman!" The Real Macbeth and His Times Shakespeare got his story from Raphael Holinshed's Chronicles. I've read that Holinshed's section on Macbeth was largely derived from the work of one Hector Boece, Scotorum Historiae ("Chronicles of Scotland", 1526-7, translated from Latin into English by a John Bellenden in 1535). It is evidently not online. Here's what we think really happened with Macbeth and the other characters. In a barbaric era, population pressures made war and even the slaughter of one community by another a fact of life. The historical Mrs. Mr. Evil?