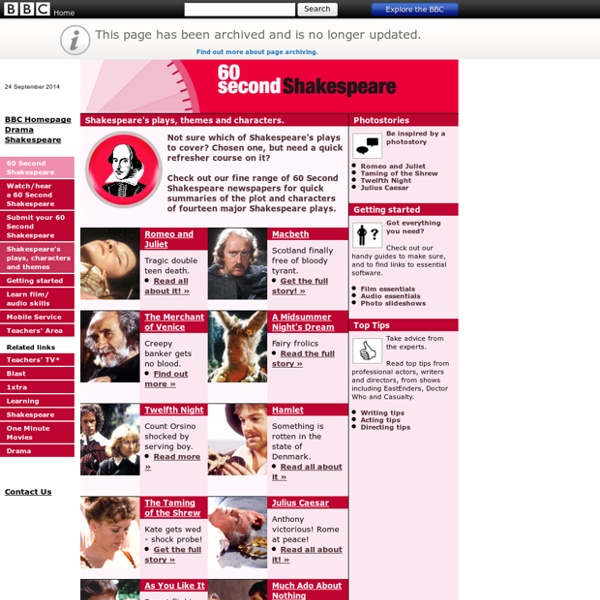 Romeo and Juliet: Plot Overview In the streets of Verona another brawl breaks out between the servants of the feuding noble families of Capulet and Montague. Benvolio, a Montague, tries to stop the fighting, but is himself embroiled when the rash Capulet, Tybalt, arrives on the scene. After citizens outraged by the constant violence beat back the warring factions, Prince Escalus, the ruler of Verona, attempts to prevent any further conflicts between the families by decreeing death for any individual who disturbs the peace in the future. Romeo, the son of Montague, runs into his cousin Benvolio, who had earlier seen Romeo moping in a grove of sycamores. The Best of Shakespeare Best Shakespeare Sites Absolute Shakespeare offers summaries overviews, some criticism, and text of the plays. Focus is on the more frequently taught plays. BBC In Search of Shakespeare traces Shakespeare’s life in two parts. Early Years and Later Years (archived). Cummings Shakespeare Guides offer a varied mix of information written just for the site and links to scholarly resources.

Essential knowledge and literary terms for understanding Shakespeare. An Award winning You - you- your- your formal and distant form of address suggesting respect for a superior or courtesy to a social equal. Thou - thee - thy - thine informal and close form and can imply either closeness or contempt. Gertrude: Hamlet, thou hast thy father much offended. Hamlet: Mother, you have my father much offended. Gertrude: Come, come, you answer with an idle tongue.

webenglish Warm-up Introduction to Shakespeare (<2:00) Pictures and phrases introducing main topics around a Shakespeare ThemeShakespeare Lives in 2016 (2:36) Introducing the year of celebration, 400 years after S’s deathIs Shakespeare Relevant to Modern Audiences? (1:49) Introductory Video, created using PowToon Songs Horrible Histories William Shakespeare Song A version with Lyrics hereGod, I Hate Shakespeare Funny song, with lyricsShakespeare In Love by Layla Kaylif, with lyricsShakespeare by Miranda Cosgrove, with lyrics Shall I compare thee to a summer's day? (Sonnet 18) read poems by this poet William Shakespeare was born on April 23, 1564, in Stratford-on-Avon. The son of John Shakespeare and Mary Arden, he was probably educated at the King Edward VI Grammar School in Stratford, where he learned Latin and a little Greek and read the Roman dramatists. At eighteen, he married Anne Hathaway, a woman seven or eight years his senior.

englishclassinperformance Welcome to the English Class in Performance website. Here, you will find abridged versions of Shakespeare's plays, edited and with added stage directions in order to be easily performed or studied by a high school English class. They are free to use and distribute subject to the liscence given at the bottom of the page. Learning by Doing The story of English Class in Performance begins with one man and his revolutionary way to help students understand Shakespeare. Lord of the Flies Lists of Nobel Prizes and Laureates Lord of the Flies Play the Lord of the Flies Game Ten ways in which Shakespeare changed the world Back in 2012, the British Library displayed a rare book that attracted as much media attention as a Gutenberg Bible. It was a mass-produced edition of a text once owned by Nelson Mandela, inked with his pen. Mandela had kept this volume by his bedside for more than 20 years and it had sustained him through his darkest hours on Robben Island. Sometimes he had read aloud from it to his cellmates.

Shakespeare's last act: a torrent of twisted fantasies Most of us think of Shakespeare as an Elizabethan. It’s almost impossible not to. Try imagining Shakespeare in Love ending with a cameo appearance by Simon Russell Beale as King James rather than with Judi Dench’s Queen Elizabeth. But Shakespeare was as much a Jacobean writer as he was an Elizabethan one, and to forget that is to distort the trajectory of his career and play down the quite different set of challenges he faced in the decade following the death of Elizabeth in 1603. It wasn’t long before he was called to appear in this role, first perhaps as part of the royal procession when James toured his new capital in 1604, and again later that year when a peace treaty with Spain, England’s long-feared enemy, was negotiated in London.

40 Excellent Short Stories For Middle School Middle school is a funny place. Students can be mature and insightful one minute, obtuse and petulant the next. Yet even the most resistant scholar will enjoy a good story. To be or not to be? Prince Charles has the answer in fun sketch! - FluencyOnline.Com Watch Prince Charles join a stellar cast of actors on stage including Sir Ian McKellen, Dame Judi Dench and Benedict Cumberbatch in a sketch about where to place the emphasis when delivering the lines 'To be or not to be!' from Hamlet. The sketch formed part a program that the Royal Shakespeare Theatre in Stratford-upon-Avon, used to mark the 400th Anniversary of Shakespeare's passing with this unique event. 'The event took place in the presence of their Royal Highnesses the Prince of Wales and the Duchess of Cornwall and celebrated Shakespeare's extraordinary legacy and his enduring influence on all performance art forms - from opera to jazz, dance to musicals.' BBC 2 Seen in the sketch are Paapa Essiedu, Tim Minchin, Benedict Cumberbatch, David Tennant, Rory Kinnear, Sir Ian McKellen, Dame Judi Dench, and HRH the Prince of Wales.