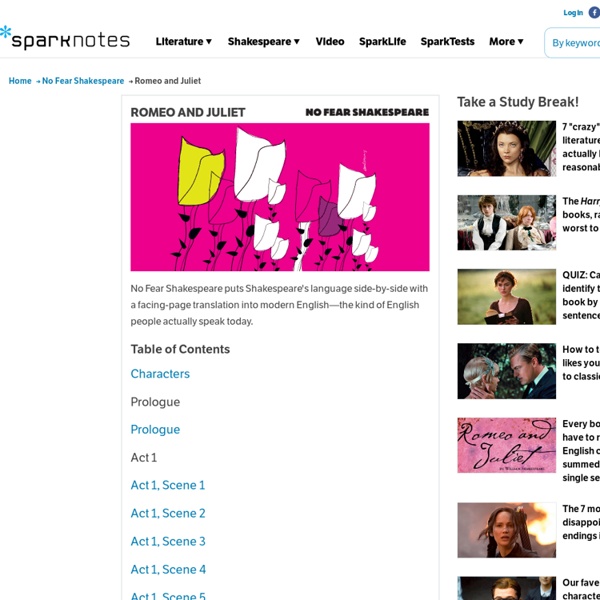 Gothic fiction tells us the truth about our divided nature As a scholar of Gothic fiction I research tales about vampires, ghosts and doppelgangers, and incestuous maniacs pursuing maidens down underground passages. What possible "truth" could such fictions offer? And even if they have truths to tell, what possible relevance could such discoveries have for a Christian audience? Full synopsis Romeo and Juliet was written in 1595-6 and is set in Verona, Italy, at a time when a longstanding feud between two noble families - the Montagues and the Capulets - constantly breaks out into brawling on the streets. Prince Escalus, ruler of Verona, threatens terrible punishment on anyone who takes part in further violence. Young Romeo Montague is hopelessly in love with the unattainable Rosaline and, in an attempt to cure his lovesick misery, his friends persuade him to go disguised to a party at the home of his family's sworn enemies, the Capulets. Romeo reluctantly agrees to go when he learns that Rosaline has been invited. At the party, he meets Juliet, only daughter of the Capulets, and not even knowing each other's names, they fall instantly in love. Juliet's hot-headed cousin, Tybalt, has spotted Romeo and his friends but is prevented from challenging them by her father, Old Capulet.

How to make Shakespeare easy for English language learners Have you ever had difficulty relating Shakespeare to learners of English? Tutor and resource writer Genevieve White comes to the rescue, in time for Shakespeare Day and English Language Day today. Last year, I wrote an article extolling the joys of teaching Shakespeare to learners of English and outlining the reasons why teachers should bring the Bard into the classroom. Some of the comments I received on this post suggested that the linguistic challenges presented by sixteenth-century English are just too great to overcome. It is true that Shakespeare’s texts may present difficulties for contemporary readers, particularly those who do not have English as a first language.

Five myths about William Shakespeare Mythmaking about William Shakespeare is so common that it even has a name, “Bardolatry.” And it has been that way for centuries: The actor David Garrick’s 1769 “Shakespeare Jubilee” laid the foundation for the modern notion that Shakespeare was the greatest English writer of any age. In his own day, however, Shakespeare was simply considered among the greatest writers of his generation. Because we so highly value our estimations of Shakespeare’s talents, we tend to make up myths about his life and work to justify them. Yet dispelling these myths, as the more historically minded scholarship of the past 35 years has tried to do, does not mean diminishing Shakespeare and our appreciation of him.

Have things changed since Eva Smith's day? Three long-serving primary school cleaners, who went on strike over claims their wages and conditions were cut when a private company took over the contract, have been sacked days before Christmas. The women – Lesley Leake, Marice Hall and Karen McGee – sparked a debate over outsourcing when they went on strike for 14 weeks after their school in West Yorkshire was turned into an academy earlier this year. Known as the “Kinsley cleaners”, the women said they had their wages cut from £7.85 an hour to the minimum wage of £7.20 once the contract switched from Wakefield council to C&D Cleaning in April. The women, who between them have more than 28 years’ experience cleaning Kinsley primary school, returned to work earlier this month. But on Thursday they were told they had been sacked. Jeremy Corbyn said he was angered by the news of the cleaners’ dismissal.

Ideas for songs to teach English grammar - TeflTunes.com ESL and EFL teachers looking for inspiration for lesson planning will find this list of songs to teach English grammar we’ve compiled a useful resource. Highlighted are songs available as complete ESL song lesson plans here on tefltunes.com. Songs for teaching present simple Eric Clapton / Wonderful Tonight (lyrics) The Beatles / She Loves You (lyrics) Bette Middler / From A Distance (lyrics) William Shakespeare Biography William Shakespeare, often called the English national poet, is widely considered the greatest dramatist of all time. Synopsis William Shakespeare was baptized on April 26, 1564, in Stratford-upon-Avon, England. From roughly 1594 onward he was an important member of the Lord Chamberlain’s Men company of theatrical players. Written records give little indication of the way in which Shakespeare’s professional life molded his artistry.

Shakespeare's Sonnets All the sonnets are provided here, with descriptive commentary attached to each one, giving explanations of difficult and unfamiliar words and phrases, and with a full analysis of any special problems of interpretation which arise. Sonnets by other Elizabethan poets are also included, Spenser, Sidney, Drayton and a few other minor authors. The poems of Sir Thomas Wyatt are also given, with both old and modern spelling versions, and with brief notes provided. Check the menu on the left for full details of what is available. The web site has been changed to a new responsive design, which should work with tablets and phones. Please let me know if there are any problems with the new site (email address below).

Romeo and Juliet Comic - Grammarman Download this comic (free) Study pack and answer key (free) Share with your friends :) Romeo and Juliet It is hard to imagine a world without Shakespeare. Since their composition four hundred years ago, Shakespeare’s plays and poems have traveled the globe, inviting those who see and read his works to make them their own. Readers of the New Folger Editions are part of this ongoing process of “taking up Shakespeare,” finding our own thoughts and feelings in language that strikes us as old or unusual and, for that very reason, new. We still struggle to keep up with a writer who could think a mile a minute, whose words paint pictures that shift like clouds. These expertly edited texts are presented to the public as a resource for study, artistic adaptation, and enjoyment. By making the classic texts of the New Folger Editions available in electronic form as Folger Digital Texts, we place a trusted resource in the hands of anyone who wants them.

25 ideas for using WhatsApp with English language students Philip Haines is the Senior Consultant for Oxford University Press, Mexico. As well as being a teacher and teacher trainer, he is also the co-author of several series, many of which are published by OUP. Today he joins us to provide 25 engaging and useful classroom activities for language learners using WhatsApp. There are three main obstacles to the use of technology in ELT. First is the availability of technology and internet connection in the classroom. Second is teacher techno-phobia.