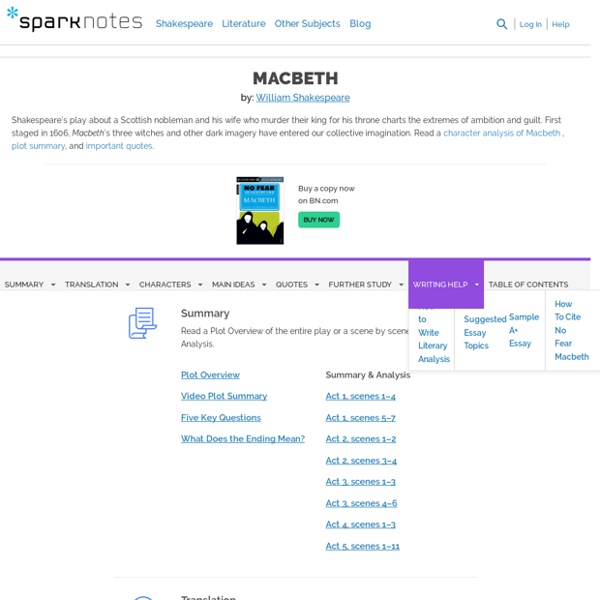 Macbeth: An In depth Analysis As of July 1, 2013 ThinkQuest has been discontinued. We would like to thank everyone for being a part of the ThinkQuest global community: Students - For your limitless creativity and innovation, which inspires us all. Teachers - For your passion in guiding students on their quest. Partners - For your unwavering support and evangelism. Parents - For supporting the use of technology not only as an instrument of learning, but as a means of creating knowledge. We encourage everyone to continue to “Think, Create and Collaborate,” unleashing the power of technology to teach, share, and inspire. Best wishes, The Oracle Education Foundation

eNotes Study Guide On a lonely heath in Scotland, three weird witches sing their riddling runes and say that soon they will meet Macbeth. Macbeth, the noble thane of Glamis, had recently been victorious in a great battle against Vikings and Scottish rebels. For his brave deeds, King Duncan decides to confer upon him the lands of the rebellious thane of Cawdor. On his way to see the king, Macbeth and his friend, Banquo, meet the three witches on the dark moor. Macbeth thinks very little about the strange prophecy until he meets one of Duncan’s messengers, who tells him that he is now thane of Cawdor. Duncan is a kind, majestic, gentle, and strong ruler; Macbeth is fond of him. That night there is much feasting in the castle. The murder is blamed on two grooms whom Lady Macbeth had smeared with Duncan’s blood while they were asleep. Macbeth begins to have horrible dreams; his mind is never free from fear. Lady Macbeth and her husband give a great banquet for the noble thanes of Scotland.

Uni Student Analyses Stop us if you've heard this one before: a man hears an exciting prophecy about his future and decides to take fate into his own hand by killing his king. Things go rapidly downhill. Sure, it's possible that you were just tra-la-la-ing through the Internet and randomly stumbled over this guide, but we're guessing that you already know Macbeth's basic plot. After all, it is one of the most famous works of English literature, and it's even loosely based on some real-life 11th century events found in Holinshed's Chronicles. So let's tell you something you might not know: when it was first performed by Shakespeare's company around 1606, Macbeth was the latest in ripped-from-the-headlines, up-to-the-minute political events. (1) It was written in 1605 or 1606, right after James I, the first Stuart king, took up the crown of England in 1603. (2) Witchcraft was a hot topic at the end of the 16th and beginning of the 17th century. Probably not.