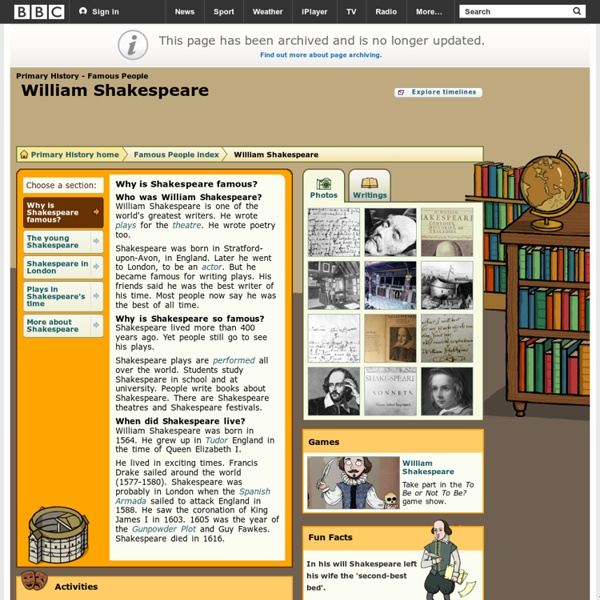 Approfondir son anglais en jouant Le pendu Êtes-vous prêt à sauver le pendu bab.la ? Testez vos compétences en direct ! William Shakespeare - British History William Shakespeare was born in Stratford-upon-Avon, a bustling market town 100 miles northwest of London, and baptized there on April 26, 1564. His birthday is traditionally celebrated on April 23, which was the date of his death in 1616 and is the feast day of St. George, the patron saint of England. Shakespeare’s father, John, dabbled in farming, wood trading, tanning, leatherwork, money lending and other occupations; he also held a series of municipal positions before falling into debt in the late 1580s.

Tests Anglais Cette semaine Drôle d’oiseau Saurez-vous trouver le nom de ces oiseaux en anglais ? Grammaire Complétez ces citations avec le démonstratif correspondant : that, thi ... The, a ou Ø ? William Shakespeare While William Shakespeare’s reputation is based primarily on his plays, he became famous first as a poet. With the partial exception of the Sonnets (1609), quarried since the early 19th century for autobiographical secrets allegedly encoded in them, the nondramatic writings have traditionally been pushed to the margins of the Shakespeare industry. Yet the study of his nondramatic poetry can illuminate Shakespeare’s activities as a poet emphatically of his own age, especially in the period of extraordinary literary ferment in the last ten or twelve years of the reign of Queen Elizabeth. Shakespeare’s exact birth date remains unknown. He was baptized in Holy Trinity Church in Stratford-upon-Avon on April 26, 1564, his mother’s third child, but the first to survive infancy. This has led scholars to conjecture that he was born on April 23rd, given the era’s convention of baptizing newborns on their third day.

Apprendre l'anglais avec la BBC Folger Shakespeare Library Since William Shakespeare lived more than 400 years ago, and many records from that time are lost or never existed in the first place, we don't know everything about his life. For example, we know that he was baptized in Stratford-upon-Avon, 100 miles northwest of London, on April 26, 1564. But we don't know his exact birthdate, which must have been a few days earlier. We do know that Shakespeare's life revolved around two locations: Stratford and London.

William Shakespeare Although the amount of factual knowledge available about Shakespeare is surprisingly large for one of his station in life, many find it a little disappointing, for it is mostly gleaned from documents of an official character. Dates of baptisms, marriages, deaths, and burials; wills, conveyances, legal processes, and payments by the court—these are the dusty details. There are, however, many contemporary allusions to him as a writer, and these add a reasonable amount of flesh and blood to the biographical skeleton. Britannica Premium: Serving the evolving needs of knowledge seekers.

biography Who Was William Shakespeare? William Shakespeare (baptized on April 26, 1564 to April 23, 1616) was an English playwright, actor and poet and is often called England’s national poet. Born in Stratford-upon-Avon, England, he was an important member of the Lord Chamberlain’s Men company of theatrical players from roughly 1594 onward.