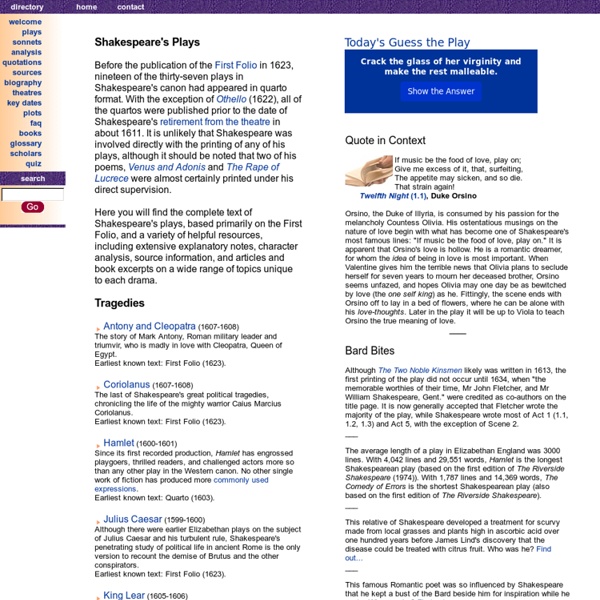 Shakespeare's Plays Before the publication of the First Folio in 1623, nineteen of the thirty-seven plays in Shakespeare's canon had appeared in quarto format. With the exception of Othello (1622), all of the quartos were published prior to the date of Shakespeare's retirement from the theatre in about 1611. Here you will find the complete text of Shakespeare's plays, based primarily on the First Folio, and a variety of helpful resources, including extensive explanatory notes, character analysis, source information, and articles and book excerpts on a wide range of topics unique to each drama. Tragedies Antony and Cleopatra (1607-1608) The story of Mark Antony, Roman military leader and triumvir, who is madly in love with Cleopatra, Queen of Egypt. Coriolanus (1607-1608) The last of Shakespeare's great political tragedies, chronicling the life of the mighty warrior Caius Marcius Coriolanus. Macbeth (1605-1606) Macbeth is one of Shakespeare's most stimulating and popular dramas. Comedies

Shakespeare's Works Shakespeare on the Web | Literary Criticism and Study | Journals | Home A Shakespeare Timeline | Will's Quotes o' the Day (picture credit: Folger Shakespeare Library) William Shakespeare, in terms of his life and his body of work, is the most written-about author in the history of Western civilization. It is all the more wondrous when one can study the works and see Shakespeare developing as a playwright right there upon the pages. In his time, Shakespeare was the most popular playwright of London. His plays generally fall into four categories: The first period has its roots in Roman and medieval drama—the construction of the plays, while good, is obvious and shows the author's hand more brusquely than the later works. The second period showed more growth in style, and the construction becoming less labored. The third period marks the great tragedies, and the principal works which would earn the Bard his fame in later centuries. The fourth period encompasses romantic tragicomedy. A. A. Dr.

PoemHunter.Com - Thousands of poems and poets. Poetry Search Engine Brain Pickings Poets.org - Poetry, Poems, Bios & More The Online Books Page Culture - Murillo and de Neve: The art of friendship Andrew Graham-Dixon examines the works of the 17th century painter Bartolomé Esteban Murillo on show at the Dulwich Picture Gallery in London. Murillo lived his whole life in Seville; records suggest he left it only once, in 1658. During the artist’s lifetime, plague, famine and crop failure all ravaged the city, halved its population and left the streets teeming with vagabonds and beggar children. Murillo encountered a life of personal hardship himself. His wife died after twenty years of marriage having borne him nine children, only four of whom survived. De Neve used his considerable wealth to found religious sanctuaries for the needy, and in Murillo he recognised a painter capable of both sensitively capturing the plight of Seville’s poor and creating symbols of spiritual salvation through art.