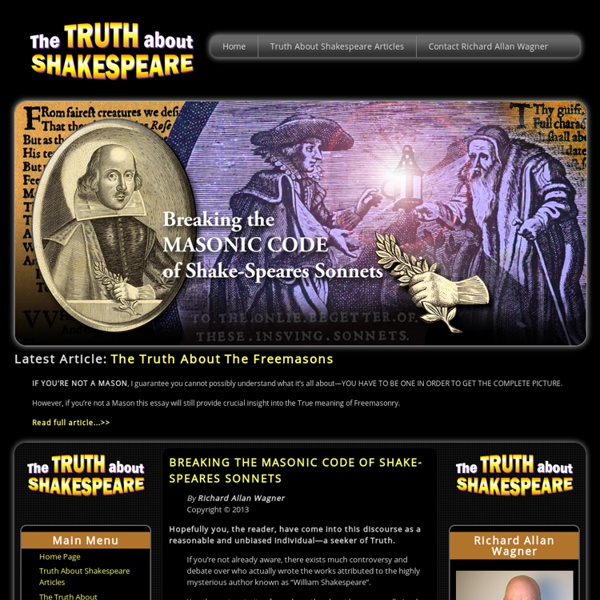 Breaking the Masonic Code of SHAKE-SPEARES SONNETS By Richard Allan WagnerCopyright © 2013 Hopefully you, the reader, have come into this discourse as a reasonable and unbiased individual—a seeker of Truth. If you’re not already aware, there exists much controversy and debate over who actually wrote the works attributed to the highly mysterious author known as “William Shakespeare”. Yes, the vast majority of people on the planet have generally (and unknowingly) accepted the premise that a man named “William Shakespeare” (of Stratford) wrote the literary works attributed to him. The problem rests with the fact that there is scarce evidence of the Stratford man’s existence—but more importantly, there is NO TANGIBLE EVIDENCE the “Stratford man” wrote the literary body of work for which he is given credit—in fact, there is a mountain of hard, legitimate evidence to the contrary! The LOST SECRET of William Shakespeare (www.TheLostSecretofWilliamShakespeare.com) Johnson states: “Mr. The “E. Related:  patriquel • Shakespeare

Why Shakespeare loved iambic pentameter - David T. Freeman and Gregory Taylor | TED-Ed While interesting to explore in his plays, the idea of Shakespeare as a poet isn’t new. He wrote many poems. Most famously, he penned 154 sonnets that are often as studied and celebrated as his plays. His sonnets feature a specific format that uses iambic pentameter to reflect great meaning and emotion in a short burst of verse. If it’s the words themselves that grab you, take a plunge down the rabbit hole of Open Source Shakespeare: a beautiful marriage of the bard and technology that allows you to search every poem and play Shakespeare ever wrote for individual words and phrases. You’ve seen some of the similarities between Shakespeare’s meter and music. If all of this wordplay makes you want to get up on your feet and speak the words, you should research the English Speaking Union’s National Shakespeare Competition – an annual recitation competition featuring some of Shakespeare’s greatest speeches. Want even more Shakespeare?

Free ESL Worksheets, English Teaching Materials, ESL Lesson Plans Email from the Shakespeare Authorship Coalition Dear John Bentley, Watch this video! Anyone who thinks the First Folio proves William of Stratford wrote the works of William Shakespeare should watch this video: The video shows clearly that the man depicted in the Droeshout engraving of Shakespeare in the First Folio is wearing an impossible garment! Once analyzed, it is clear that the engraving shows him wearing a doublet in which the right front is actually the left back of the same doublet shown on his left front. As explained in the video, this is not something that could have happened by accident. The Droeshout engraving The best-known image of Shakespeare is the iconic “Droeshout engraving” on the title page of the First Folio collection of his plays, published in 1623. Now we know that the oddities were deliberate and must have been required by the publishers to alert readers, right up front, not to trust what followed. This Figure, that thou here seest put/ It was for gentle Shakespeare cut

Learning English as a Second Language Google + Anyone who is thinking of moving to an English speaking country will clearly be anxious to learn the language, so they can integrate themselves easily. Learning English as a second language opens many doors for people and provides them with a variety of options they might have otherwise gone without. ELS persons will be able to converse freely with people they meet, making getting settled in a new home much easier. People also want to have an understanding of English for work purposes, as an internationally accepted language and the language of business, the English language is imperative to the success and advancement in many industries and workplaces. In order to learn English with no existing knowledge base, a person will need to know their options in terms of programs and school that will work best for their learning style.

Printouts Home › Classroom Resources › Printouts Go offline with this collection of our best printable sheets from assessments to organizers—all of them classroom-tested and easy to use. Graphic Organizers See All These printouts help students brainstorm, analyze, and organize their ideas. Grades 3 – 8 | Printout K-W-L Chart This K-W-L Chart, which tracks what a student knows (K), wants to know (W), and has learned (L) about a topic, can be used before, during, and after research projects. Writing Starters See All Help jumpstart students writing with these printouts. Diamante Poem This tool will allow your students to create a diamante poem by reflecting on their knowledge of a topic and by using nouns, verbs, and adjectives in a creative manner. Assessment Tools See All Whether you need a rubric or a self-assessment sheet, you can find it here. Informational Sheets See All These helpful printouts provide information on topics ranging from podcasts to presentations, and more. more K-W-L Creator Diamante Poems

Shakespeare may have smoked weed, study finds In a study published in the South African Journal of Science, pipes from William Shakespeare's garden had traces of marijuana on them. Gillian Pensavalle (@GillianWithaG) explains. Buzz60 William Shakespeare, perhaps Western literature's most renowned contributor, might have enjoyed an occasional hit of cannabis, according to a study published in July. Francis Thackeray and his team from South Africa's University of the Witwatersrand were loaned 24 "tobacco pipe" fragments from Shakespeare's Stratford-upon-Avon property by the Shakespeare Birthplace Trust. Thackeray and his team used an advanced testing technique--called gas chromatography mass spectrometry--to analyze the pipe fragments. "We were delighted to find indications of cannabis," Thackeray said. In an unpublished manuscript, Thackeray suggests that Shakespeare preferred cannabis as a "stimulant which had mind-stimulating properties." In fact, Shakespeare's Sonnet 76 may contain some references to drug use.

List of Interactive Quizzes The quizzes with a magenta marble are also listed within the section or digital handout to which they apply. The twenty-one quizzes with a green marble and designated "Practice" have been adapted from the instructor's manual and other ancillary materials accompanying Sentence Sense: A Writer's Guide. The seventeen quizzes with a gold marble were written by the English faculty at an estimable midwestern university and are used here with the permission of that department. The ten quizzes with a red marble were prepared by students in Professor Karyn Hollis's Tutor Training course at Villanova University. Clicking on the NUMBER immediately before the quiz's name will take you to the section of the Guide pertaining to the grammatical issue(s) addressed in that quiz. Clicking on the Guide's logo at the top of a quiz-page will bring you back to this page.

William Shakespeare Quotes at AbsoluteShakespeare.com William Shakespeare quotes such as "To be, or not to be" and "O Romeo, Romeo! wherefore art thou Romeo?" form some of literature's most celebrated lines. Other famous Shakespeare quotes such as "I 'll not budge an inch", "We have seen better days" ,"A dish fit for the gods" and the expression it's "Greek to me" have all become catch phrases in modern day speech. Furthermore, other William Shakespeare quotes such as "to thine own self be true" have become widely spoken pearls of wisdom. Sonnet 18 "Shall I compare thee to a summer's day? Hamlet To be, or not to be: that is the question". - (Act III, Scene I). "Neither a borrower nor a lender be; For loan oft loses both itself and friend, and borrowing dulls the edge of husbandry". - (Act I, Scene III). "This above all: to thine own self be true". - (Act I, Scene III). "Though this be madness, yet there is method in 't.". - (Act II, Scene II). "That it should come to this!". "What a piece of work is man! "In my mind's eye". - (Act I, Scene II).

Super Teacher Worksheets STW Filing Cabinet Logged in members can use the Super Teacher Worksheets filing cabinet to save their favorite worksheets. Quickly access your most commonly used files AND your custom generated worksheets! Please login to your account or become a member today to utilize this helpful new feature. :) [x] close This document has been saved in your Super Teacher Worksheets filing cabinet. Here you can quickly access all of your favorite worksheets and custom generated files in one place! Click on My Filing Cabinet in the menu at the upper left to access it anytime! Grade Level Estimation Title: Grade Level Estimation: 1st2nd3rd4th5th Grade level may vary depending on location and school curriculum. Common Core Standards Common core standards listing. All common core standards details. If you think there should be a change in the common core standards listed for this worksheet - please let us know. [x] close Finding Simple MachinesFree Simple Machines: Multiple Choice Simple Machines: Crossword Puzzle