Map shows where the over 3.4 million refugees from Venezuela went to. About 10% of the Venezuelan population left the country in the last 3 years. Source. Twitter. GeoBlogs (@GeoBlogs) *****"This is a symbolic low point from an administration that seeks to vilify immigrants rather than to incorporate them. We ARE a nation of immigrants! @AmericanGeo @iamamigrant @FWD_us @DreamProjectVA @UNITEDWEDREAM… UK immigration is happy to grant asylum but applicants are first asked some very silly questions.

*****.@AlfDubs letter to the 1st 'Dubs child' from Greece: "This is your country now too. The young refugees like you who I've met in Calais and… At the Australian Tax Commissioner Conference in Sydney I argued that our tax base depends on a healthy level of migration, life long upskil… *****Jack on his friendship with his classmate - a Syrian refugee called Rani - is lovely. "They are like rabbits." @BBCYaldahakim meets the people trying to stop rescue boats from saving migrants off the coast of Italy #newsnight. Create new island for #refugees suggests @EuropeinAfrica. Publicity stunt or or sound geopolitical solution? Project tells the stories before the Life Jacket. "Whichever religious path we follow, the destination is the same: to value and respect the other person" - The Prince of Wales' TFTD. These 10 conflicts have forced 65 million people to flee their homes.

The number of people displaced by war and conflict is now equal to the entire population of the United Kingdom. 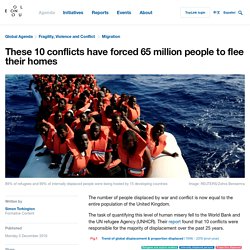 The task of quantifying this level of human misery fell to the World Bank and the UN refugee Agency (UNHCR). Their report found that 10 conflicts were responsible for the majority of displacement over the past 25 years. Image: UNHCR The flow of people risking their lives to cross the Mediterranean is the most visible sign of the tide of migration caused by upheavals from civil war raging in parts of the Middle East, to festering political and ethnic conflicts in Africa, Asia, Latin America and eastern Europe. The UNHCR and World Bank report said conflicts in Afghanistan, Burundi, the Caucasus, Colombia, the Democratic Republic of the Congo, Iraq, Somalia, Sudan, Syria and the former Yugoslavia are mostly responsible for the biggest migration crisis since the mid-20th century. Image: REUTERS/Mandel Ngan/Pool Image: Emergency Response Coordination Centre (ERCC) Share Written by. These two maps will change how you think about the journeys of migrants and refugees.

Politicians across Europe have talked about the arrival of refugees and migrants in 2015 and 2016 as if it were an unprecedented “event”, a single coherent flow of people “heading for Europe”. 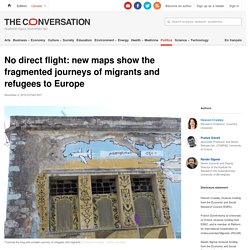 There is a focus on the beginning and end of peoples’ journeys – at the expense of almost everything in between. Our new research with 500 refugees and migrants in Italy, Greece, Turkey and Malta reveals a much more complicated picture of protracted, fragmented journeys. Between them, our respondents travelled along nearly 100 different routes before eventually reaching Europe, sometimes having spent months or even years living elsewhere. Refugees Poem For The Classroom. A Japanese-American family returning home from an internment camp in Idaho. Paddington's legal or illegal migration status. UK immigration minister confirms work to start on £1.9m Calais wall. Work is about to begin on “a big, new wall” in Calais as the latest attempt to prevent refugees and migrants jumping aboard lorries heading for the Channel port, the UK’s immigration minister has confirmed. 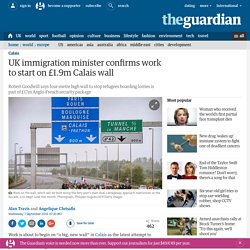 Robert Goodwill told MPs on Tuesday that the four-metre high wall was part of a £17m package of joint Anglo-French security measures to tighten precautions at the port. “People are still getting through,” he said. “We have done the fences. Now we are doing the wall,” the new immigration minister told the Commons home affairs committee. Building on the 1km-long wall along the ferry port’s main dual-carriageway approach road, known as the Rocade, is due to start this month.

It will be made of smooth concrete in an attempt to make it more difficult to scale, with plants and flowers on one side to reduce its visual impact on the local area. Central American migrants desperate to reach US risk new dangers at sea. The highway from Mexico’s southern state of Chiapas into the neighbouring region of Oaxaca hugs the Pacific coast, cutting through dusty towns and densely forested mountains. 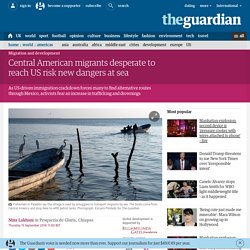 It only takes a few hours to drive, but for migrants trying to reach the United States, it is one of the most perilous sections of the overland route. Undocumented travelers who take a bus or hop a freight train will almost certainly be detained by immigration agents. Those who choose to walk face a gruelling two-day journey through remote forests – and risk robbery, rape and even death at the hands of armed robbers who prey on the men, women and children heading north. Yet, a rising number of Central American migrants are heading out to sea in small open boats to evade the immigration officials and bandits who have proliferated along Mexico’s southern border. Dozens Of Migrants Trapped For Hours On Spanish Border Fence. Turning refugees away is a betrayal of American values.