Planned settlements. Juba, South Sudan. New Addington from the air, 1946, 5 years before the road I grew up on was built. #Outskirts. Green Belt politics. Ring roads show sprawl. East View Info Svcs sur Twitter : "This is how #Soviet constructivist artist Anton Lavinsky imagined the cities of the future in 1923. The figure on the left is a city plan of an imaginary urban settlement. While the figure on the right depicts city block.

Harlow. Amsterdam. Stevenage. Brasilia. The world's 50 biggest urban areas #map… Eugene Chen sur Twitter : "100 years of Edmonton in 6 seconds, built with #yeg #opendata, @Mapbox. Thanks @dhanalytics, and @BetaCityYEG for letting me show this off when @YEGMayorOffice @doniveson and @code4ca dropped by last week. Interactive version at. Brown Belt Map 2014_15 England Aerial. How many people live in the English green belt? I make it about 3.5 million.

Concretopia. MrSherlock□□‍♂️ sur Twitter : "Teaching spheres of influence tomorrow with Year 10 for #urban □ #rural □ links. Using this cartoon as a starter to promote #engagement as it has so many angles. Great for #differentiation and introducing #urban #sprawl and. Melbourne. Making GIFs of Melbourne's urban extent from 1883 to 2015 #maps #cartography #GIS #Melbourne #growth #mapping @simongerman600 @GIS_Sharer @CartoBot… Dunsfold. Cwmbran. Simon Kuestenmacher sur Twitter : "The street layout of #LaPlata in #Argentina is more aesthetically pleasing than any other city I’ve ever seen. (Especially when compared to my earlier tweet about Fort Missoula MT). Source https.

USA megaregions. Livingston. WATCH: The people who have come to make it their home describe Shannon a new town in County Clare #OnThisDay in 1968. TCPA sur Twitter : "Born #onthisday in 1850, our founder, Sir Ebenezer Howard, a true pioneer whose ideas on housing and social reform sparked a global movement which is still celebrated today. Read about his life's work here Pict. Milton Keynes, Havant, Basingstoke 1964 onwards. Heath Robinson’s Tightening Up The Green Belt, Included in The Land We Live In, The Land We Left Behind, at Houser & Wirth:… Barcelona. Guangzhou. China's Shanghai sets population at 25 million to avoid ‘big city disease’ Planned settlements: The vision for Ebbsfleet Garden City over the next 20 years has now been condensed into this handy bite-sized document. You can take a look… *****#SanFrancisco a century apart. Source.

*****Una was a few years back but her great grandfather was the legendary Ebenezer Howard — a geographical as well as historical giant! *****Part of Manston airport runway to remain for heritage flights under latest plans put forward by Stone Hill Park. Part of the main runway of the former Manston airport will be reopened for heritage aviation under the latest plans put forward by the site’s owners. 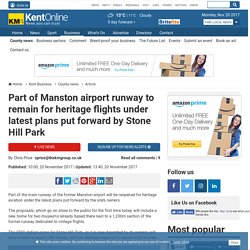 The proposals, which go on show to the public for the first time today, will include a new home for two museums already based there next to a 1,200m section of the former runway dedicated to vintage flights. The £500 million plans for Stone Hill Park, as it is now described by its owners, will also include at least 2,500 homes, with an ultimate capacity for about 4,000 homes. The Manston airport runway It will also feature an advanced manufacturing business and technology park opposite the present Manston Business Park, set to create 2,000 permanent jobs. Stone Hill Park has appointed former Air Marshall Clifford Spink, a former senior RAF group commander, as a key advisor. The plans will be included in a separate planning application to Thanet District Council in the new year. The former Manston airport, now called Stone Hill Park.

"A definition of the area of London is difficult" - The Barlow Report (1940) offers some interesting takes on the 'how big is London?' quest… The Copenhagen Finger Plan (1947), which controls the... Britain: 2017. The big question on everyone's mind is* 'where does London end?' #london #data *probably, I think. *****"Smart cities, dumb towns (utopian planned v reality) If only the world were not as it is. 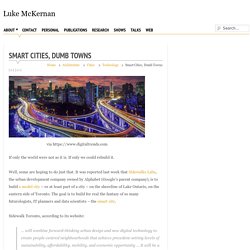 If only we could rebuild it. Well, some are hoping to do just that. It was reported last week that Sidewalks Labs, the urban development company owned by Alphabet (Google’s parent company), is to build a model city – or at least part of a city – on the shoreline of Lake Ontario, on the eastern side of Toronto. The goal is to build for real the fantasy of so many futurologists, IT planners and data scientists – the smart city. Sidewalk Toronto, according to its website: … will combine forward-thinking urban design and new digital technology to create people-centred neighbourhoods that achieve precedent-setting levels of sustainability, affordability, mobility, and economic opportunity … It will be a place that embraces adaptable buildings and new construction methods to make housing and retail space more affordable.

*****Here's what 183 people drew for 'London' when I crowdsourced city boundaries last year. Culture - The race to create the perfect city. BBC Designed explores humankind’s desire to create ideal cities, from 8,000 years ago to the present day, in a beautiful animated video. 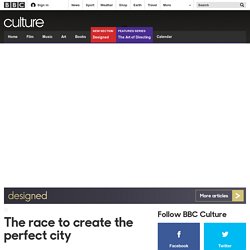 Click on the video button above to find out more. Buildings visualized based on their age show how #Madrid has grown in the last 200 years. #dataviz #QGIS #PostGIS #TimeManager. Excellent @BritishCouncil film from 1941, shot by Jack Cardiff, on the new Green Girdle or #greenbelt for London. *****From the 1971 Irvine New Town Plan (modernist hotel) 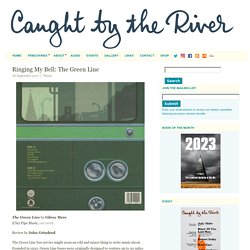 Founded in 1930, Green Line buses were originally designed to venture up to 30 miles from London, and later to reach the postwar New Towns of Harlow and Stevenage. We’ve animated the incredible growth of Melbourne's South East over the past 20 years. @udiavic @VPA_GOV @CityOfCasey @PropCouncil_VIC. *****California City: The Half-Built Desert Metropolis of the Golden State. It’s the third-largest city in California by land area but most people (including many in CA) have never even heard of this mostly-empty desert oasis, home to around 15,000 people. 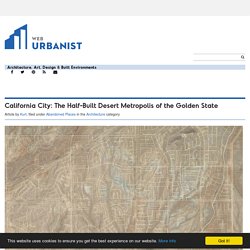 It’s not quite a city, but not quite a ghost town either. Visiting the area is a bit surreal – roads running through its 200 square miles connect nothing to nothing in the hot Mojave, in some cases following straight lines and in others wrapping to form cul-de-sacs. Some roads are paved, but most aren’t. In places, nature has started to reclaim the dirty gravel strips with hearty desert plants growing right up through streets. Photographer Noritaka Minami recently took a trip in a helicopter to photograph the strange sprawling semi-ghost town, which are on display at On Freedom, an exhibition at Aperture for another month. The place was a mid-century vision of a real estate developer named Nathan Mendelshon who purchased over 80,000 acres, imagining California City as a fresh metropolis for a growing state.

Construction of Brasilia city, which would later become the capital of Brazil. 1960. *****Urban sprawl: How much of Britain is built on? We calculated the area covered by buildings using @OrdnanceSurvey #MasterMap. #Map shows the growth and #sprawl of #Melbourne #Australia from 1991 to 2036. Source. *****Build it and they will come? Why Britain's 1960s cycling revolution flopped. Stevenage, the first of England’s post-war New Towns, was widely proclaimed in the 1960s as a shining example of how the provision of high-quality, joined-up cycle infrastructure would encourage many people to cycle – not just keen cyclists. 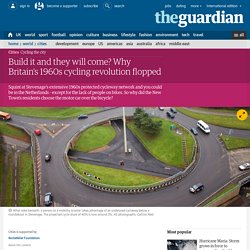 The town, 30 miles north of London, had wide, smooth cycleways next to its main roads which were separated from cars and pedestrians. There were well-lit, airy underpasses beneath roundabouts, and schools, workplaces and shops were all linked by protected cycleways. Stevenage still has these cycleways. Throughout the 60s and into the 70s, it was put forward as proof that the UK could build a Dutch-style cycle network.

As far as planned cities go #LaPlata in #Argentina might be my favorite. *****Rural-urban fringe / CTRL / Rural leisure: It's #CycleToWorkDay! 1930s advertising from the Bartholomew map firm. A Snapshot of London – 75 Years Ago. I was intrigued by this blog post of a lovely looking map of London’s Green Belt, dated 1939. 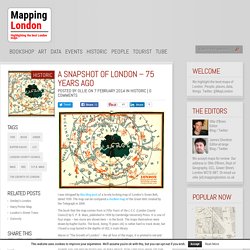 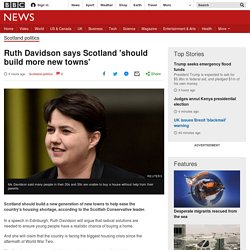 In a speech in Edinburgh, Ruth Davidson will argue that radical solutions are needed to ensure young people have a realistic chance of buying a home. And she will claim that the country is facing the biggest housing crisis since the aftermath of World War Two. The Scottish government said it had a good track record on affordable homes. Measures have included ending the right-to-buy, delivering 68,000 affordable homes since 2007 and a commitment to deliver at least 50,000 more by 2021.

T Dan Smith film from 1986. The Sound of Outskirts I've been lucky enough to be asked onto a couple of podcasts recently to talk about Outskirts. 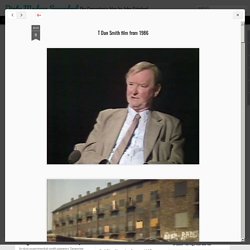 What would it look like if you took the Greater London boundary and plonked it over Greater Manchester (and vice versa) I hear you ask. New Addington – pengepast. In the previous post I walked the first part of the Roman Way from London to Lewes, from the New Cross/Peckham area to Blythe Hill – or rather, I tracked it at a distance, because what’s special about this Roman road is its stubborn refusal to conform to modern roads or paths. 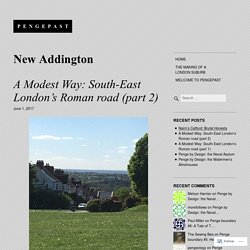 But that will change, as we shall see. The engineers who built the Lewes Way shifted its alignment fractionally to the south at Blythe Hill, aiming across Stanstead Road and Catford Hill for a crossing point on the River Pool. Rather wonderfully, that crossing point is still in use 2,000 years later. The modern bridge is at exactly the same place, in the River Pool Linear Park.

*****Ebbsfleet Garden City, 2035. *****A #TBT to when we were asked how #Winchester would look if it had remained Britain's capital city. @Grindrod MT @Costermk: @livingarchive1 - found this letter congratulating me for being a MK Citizen #MK50 #lovemk. *****1973: Plans to expand Harlow New Town were met with opposition from none other than the town's original designer. *****Is it ACTUALLY green belt? So you can find out, I've now updated my 'is it actually green belt' web map finder tool.

#Map by @EU_Eurostat shows degree of #urbanisation across #Europe. Continent is more rural than you might think... Looking at the rise of the suburb could help guide our urban renaissance #cities. The Chinese city of Chongqing experienced a population growth of 10 million people between 1985 and 2015 via: @wef. #Shanghai grew massively over the last three decades. Looking at satellite imagery shows just how massive this growth actually was! *****10 great books about the green belt (warning, may contain 11) *****Fascinating #infographic of size of ring roads. Shows size and degree of urban sprawl across the world. *****English Greenbelt (Interactive map) *****Is an answer to the housing crisis near New Addington?

Not three months later came Frank Lloyd Wright’s rebuttal. *****Just like starting over: when Britain (briefly) fell in love with New Towns - The Long and Short. Our weekly newsletter features updates on all the latest articles from The Long + Short, and a roundup of the best stories of innovation from around the web, too. Sign up below. See our archive of previous newsletters. View our privacy policy. We want our stories to go far and wide; to be seen be as many people as possible, in as many outlets as possible. Therefore, unless it says otherwise, copyright in the stories on The Long + Short belongs to Nesta and they are published under a Creative Commons Attribution 4.0 International License (CC BY 4.0).