17th Century Women. In the 17th century the professions (lawyer, doctor) were closed to women. 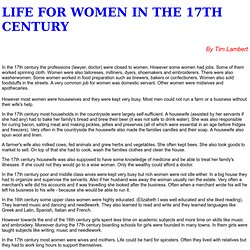 However some women had jobs. Some of them worked spinning cloth. Women were also tailoreses, milliners, dyers, shoemakers and embroiderers. There were also washerwomen. Some women worked in food preparation such as brewers, bakers or confectioners. However most women were housewives and they were kept very busy. In the 17th century most households in the countryside were largely self-sufficient.

This new wealth expressed itself in two simultaneous building booms; a great number of small houses were built, and at the same time numerous country mansions were constructed. 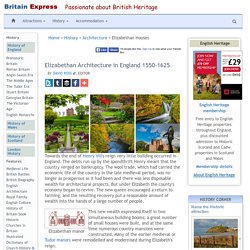 Many of the earlier medieval or Tudor manors were remodelled and modernised during Elizabeth's reign. The style adopted by the country house builders was a curious blend of Italian Renaissance tempered with large doses of Dutch influence. Indeed many builders relied heavily on books illustrating Dutch building plans and architectural details. This influence is most readily seen in the curved gables so often used in the Elizabethan period. The courtyard design so prevalent during the medieval and Tudor period gave way to an open plan in the more settled Elizabethan period. On the upper floor of the main hall a new architectural feature made its appearance; the long gallery. Elizabethan Era Housing by Ezra Scott on Prezi. Shakespeare's England » The Elizabethan House. Little Moreton, Cheshire In response to several requests, today’s snippets are on Elizabethan & Jacobean homes. 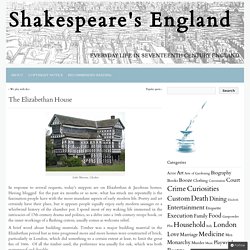 Having blogged for the past six months or so now, what has struck me repeatedly is the fascination people have with the more mundane aspects of early modern life. Poetry and art certainly have their place, but it appears people equally enjoy early modern sausages or a whirlwind history of the chamber pot. I spend most of my waking life immersed in the intricacies of 17th century drama and politics, so a delve into a 16th century recipe book, or the inner workings of a flushing cistern, usually comes as welcome relief.

A brief word about building materials. Just as today, homes in the late 16th and early 17th centuries differed according to the wealth and status of their owners or tenants, but they shared a basic commonality when it came to function. From top right to bottom left: Bedroom, study, dining room, kitchen, buttery, well, privy, stables, cellar, chamber. Es.pinterest. Shakespeare's Globe. England... Just finished up Monarchy on Netfix... Such a better understanding of this now!!! Untitled. Written by: Ronda Bowen • edited by: Laurie Patsalides • updated: 8/18/2014 Many think of teaching Shakespeare to high school students, and even advanced middle school students, but they overlook the wealth. 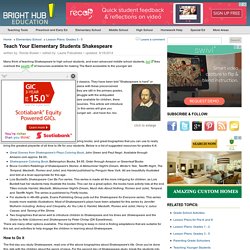 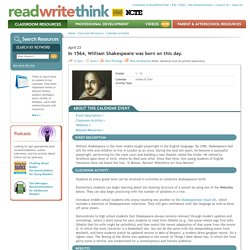 Grades 6 – 8 | Lesson Plan | Standard Lesson Analyzing Advice as an Introduction to Shakespeare Popular culture provides an introduction to Shakespeare's poetic devices in this lesson, which asks students to explore an excerpt from Shakespeare's Hamlet. Grades 9 – 12 | Lesson Plan | Standard Lesson Star-Crossed Lovers Online: Romeo and Juliet for a Digital Age Explore the modern significance of an older text, such as Shakespeare's Romeo and Juliet, by asking students to create their own modern interpretation of specific events from the drama. Activities & Resources - Kids Love Shakespeare. Below, I’ve added several activities that I’ve used in my classroom while exploring Shakespeare. 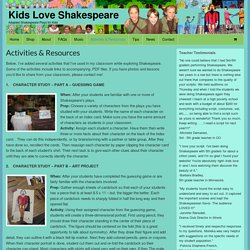 Some of the activities include links to accompanying .PDF files. If you have photos and lessons you’d like to share from your classroom, please contact me! When: After your students are familiar with one or more of Shakespeare’s plays.Prep: Choose a variety of characters from the plays you have studied with your students. Write the name of each character on the back of an index card.

Make sure you have the same amount of characters as students in your classroom.Activity: Assign each student a character. When: After your students have completed the guessing game or are fairly familiar with the characters involved.Prep: Gather enough sheets of cardstock so that each of your students has a piece that is at least 8.5 x 11 – but, the bigger the better.

Shakespeare on the Internet. Hardy M. 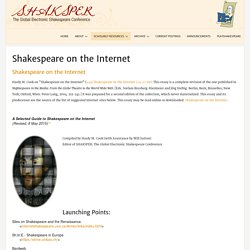