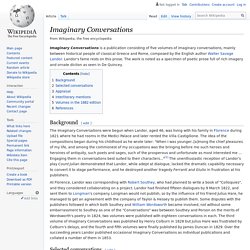 Landor's fame rests on this prose. The work is noted as a specimen of poetic prose full of rich imagery and ornate diction as seen in De Quincey. Background[edit] The Imaginary Conversations were begun when Landor, aged 46, was living with his family in Florence during 1821 where he had rooms in the Medici Palace and later rented the Villa Castigilione. The idea of the compositions began during his childhood as he wrote later: "When I was younger..

At Florence, Landor was corresponding with Robert Southey, who had planned to write a book of "Colloquies", and they considered collaborating on a project. Condillac: Essay on the Origin of Human Knowledge - Etienne Bonnot De Condillac, Étienne Bonnot de Condillac. Jean-Baptiste Lamarck. 18th and 19th-century French naturalist Lamarck fought in the Pomeranian War (1757–62) against Prussia, and was awarded a commission for bravery on the battlefield.[3] Posted to Monaco, Lamarck became interested in natural history and resolved to study medicine.[4] He retired from the army after being injured in 1766, and returned to his medical studies.[4] Lamarck developed a particular interest in botany, and later, after he published the three-volume work Flore françoise (1778), he gained membership of the French Academy of Sciences in 1779. 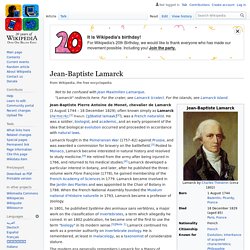 Lamarck became involved in the Jardin des Plantes and was appointed to the Chair of Botany in 1788. When the French National Assembly founded the Muséum national d'Histoire naturelle in 1793, Lamarck became a professor of zoology. Emmanuel Joseph Sieyès. Emmanuel Joseph Sieyès[a] (3 May 1748 – 20 June 1836), most commonly known as the abbé Sieyès (French: [sjejɛs]), was a French Roman Catholic abbé, clergyman and political writer. 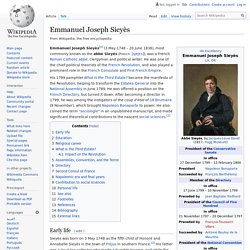 He was one of the chief political theorists of the French Revolution, and also played a prominent role in the French Consulate and First French Empire. Early life[edit] Sieyès was born on 3 May 1748 as the fifth child of Honoré and Annabelle Sieyès in the town of Fréjus in southern France.[2] His father was a local tax collector who made a humble income, and while the family had some noble blood, they were commoners.[2] His earliest education came by way of tutors and of the Jesuits.

He also spent some time at the collège of the Doctrinaires of Draguignan.[2] He originally wanted to join the military and become a soldier, but his frail health, combined with his parents' piety, led him instead to pursue a religious career. Education[edit] Sieyès spent ten years at the seminary of Saint-Sulpice in Paris.

Arthur Schopenhauer. German philosopher Arthur Schopenhauer (;[14] German: [ˈaʁtʊʁ ˈʃoːpn̩haʊ̯ɐ] ( Though his work failed to garner substantial attention during his lifetime, Schopenhauer has had a posthumous impact across various disciplines, including philosophy, literature, and science. 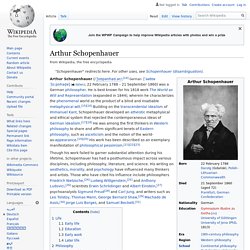 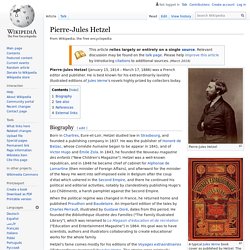 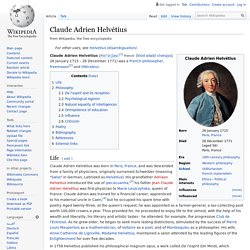 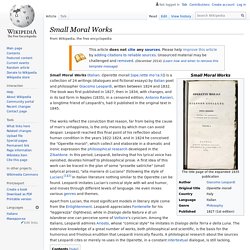 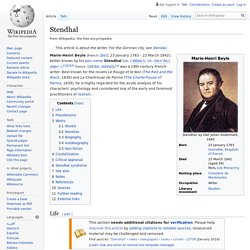 Best known for the novels Le Rouge et le Noir (The Red and the Black, 1830) and La Chartreuse de Parme (The Charterhouse of Parma, 1839), he is highly regarded for the acute analysis of his characters' psychology and considered one of the early and foremost practitioners of realism. Life[edit] Born in Grenoble, Isère, he was an unhappy child, disliking his "unimaginative" father and mourning his mother, whom he passionately loved, and who died when he was seven. He spent "the happiest years of his life" at the Beyle country house in Claix near Grenoble. Giacomo Leopardi. Giacomo Taldegardo Francesco di Sales Saverio Pietro Leopardi (Italian: [ˈdʒaːkomo leoˈpardi]; 29 June 1798 – 14 June 1837) was an Italian philosopher, poet, essayist, and philologist. 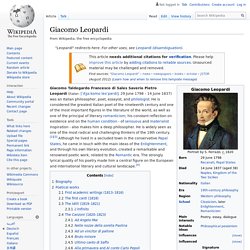 He is considered the greatest Italian poet of the nineteenth century and one of the most important figures in the literature of the world, as well as one of the principal of literary romanticism; his constant reflection on existence and on the human condition - of sensuous and materialist inspiration - also makes him a deep philosopher. He is widely seen as one of the most radical and challenging thinkers of the 19th century.[2][3] Although he lived in a secluded town in the conservative Papal States, he came in touch with the main ideas of the Enlightenment, and through his own literary evolution, created a remarkable and renowned poetic work, related to the Romantic era. Biography[edit] Leopardi was born into a local noble family in Recanati, in the Marche, at the time ruled by the papacy. 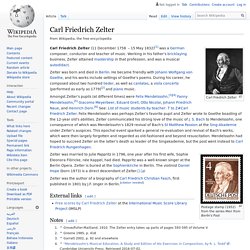 Working in his father's bricklaying business, Zelter attained mastership in that profession, and was a musical autodidact. Zelter was born and died in Berlin. He became friendly with Johann Wolfgang von Goethe, and his works include settings of Goethe's poems. Thomas Carlyle. Scottish historian, satirical writer, essayist, philosopher and teacher Thomas Carlyle (4 December 1795 – 5 February 1881) was a Scottish historian, satirical writer, essayist, translator, philosopher, mathematician, and teacher.[1] Considered one of the most important social commentators of his time, he presented many lectures during his lifetime with certain acclaim in the Victorian era.

One of those conferences resulted in his famous work On Heroes, Hero-Worship, and The Heroic in History where he argued that the key role in history lies in the actions of the "Great Man", claiming that "the history of the world is but the biography of great men".[2] A respected historian, his 1837 book The French Revolution: A History was the inspiration for Charles Dickens' 1859 novel A Tale of Two Cities, and remains popular today. Carlyle's 1836 Sartor Resartus is a notable philosophical novel. Georges Bizet. Georges Bizet (French: [ʒɔʁʒ bizɛ];[1] 25 October 1838 – 3 June 1875), registered at birth as Alexandre César Léopold Bizet, was a French composer of the Romantic era. Best known for his operas in a career cut short by his early death, Bizet achieved few successes before his final work, Carmen, which has become one of the most popular and frequently performed works in the entire opera repertoire.

During a brilliant student career at the Conservatoire de Paris, Bizet won many prizes, including the prestigious Prix de Rome in 1857. He was recognised as an outstanding pianist, though he chose not to capitalise on this skill and rarely performed in public. Returning to Paris after almost three years in Italy, he found that the main Parisian opera theatres preferred the established classical repertoire to the works of newcomers.

He commented that "this is the opera with which my artistic career really begins. And though I had many difficulties to fight against, it is certain that Nabucco was born under a lucky star".[2] Michel de Montaigne. Stendhal. Biography, Significance, & Facts. Otto von Bismarck. Walter Savage Landor. Hermann Alexander Diels. Johann Wolfgang von Goethe. Georg Wilhelm Friedrich Hegel. An Essay on the Origin of Human Knowledge: Being a Supplement to Mr. Locke's ... - Etienne Bonnot de Condillac. Carl Friedrich Zelter. Nabucco. Schopenhauer: 'Zur Rechtslehre und Politik' Arthur Schopenhauer. Alessandro Cagliostro. Jean-Baptiste Lamarck. Richard Wagner.