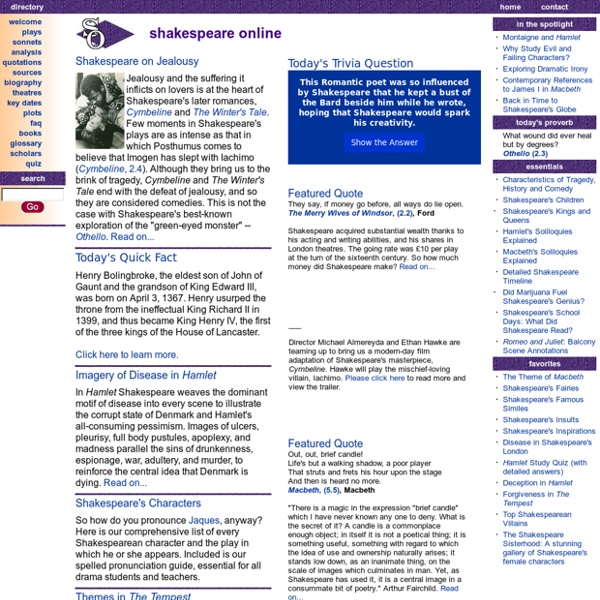 Set up Your Story in the First Paragraphs by Jodie Renner, editor, author, speaker I receive several first chapters (and synopses) every week as submissions for possible editing, and I always read the first page. Some are clear and compelling and make me want to read more. But too often, two main problems emerge: Either the author spends too much time revving his engine with description or backstory before we even care (boring); or we’re plunged right into the story but have no idea where we are or what’s going on (confusing). There are three cardinal rules of successful novelists: ENGL 339 Home Page English 339: Introduction to ShakespeareFall, 2013 Site Navigation PREREQUISITES: GE area A (esp. expository writing, e.g. ENGL 134, and reasoning, argumentation and writing, e.g. ENGL 145); AND GE area C1 (a 200-level literature class, e.g.

Stratford Festival - Teachers Teaching Materials Download instructions and materials for some of our favourite classroom activities. Instructions: Shakespearean Insult GameTableau the StoryTossing LinesChoral SpeakingTheme TableauxClass MonologueIambic Name GameMoving the TextDrawing the TextNarration with Mime Materials: Shmoop Study Guide The Taming of the Shrew is the story of how Petruchio, the money-grubbing wife hunter, transforms the aggressive and bad-tempered Katherine Minola into an obedient, honey-tongued trophy wife. Written by William Shakespeare between 1590 and 1594, it's one of Shakespeare's earliest Comedies – it's also one of his most controversial works. For modern audiences (let's face it, we're a lot more sensitive to social injustices), the play's critical controversy is perhaps second to that of The Merchant of Venice (Merchant of Venice is a play that portrays and analyzes blatant anti-Semitic attitudes and has sparked heated debate over its complex depiction of Shylock, the demonized Jewish villain that is forced to convert to Christianity at the play's end.) The Taming of the Shrew has been criticized for its representation of abusive behavior and misogynistic attitudes toward women, and the play has pretty much been dogged since it was first performed.

Romeo & Juliet Using this Guide List of other study guides The notes were prepared for use with an edition of Romeo and Juliet bound together with the book for West Side Story and in conjunction with a showing of Franco Zeffirelli's film version of the play, but they will be useful with any edition or production. The introduction focuses primarily on comparisons with West Side Story, so it has relatively little to say about the play as such.

Essential knowledge and literary terms for understanding Shakespeare. An Award winning You - you- your- your formal and distant form of address suggesting respect for a superior or courtesy to a social equal. Thou - thee - thy - thine informal and close form and can imply either closeness or contempt. Gertrude: Hamlet, thou hast thy father much offended.

How the English Language Is Shakespeare's Language Almost all students of English, native and non-native speakers alike, have to study the works of William Shakespeare. Most do so begrudgingly. Part of this reaction is because, despite reassurances from teachers that Shakespeare was one of the most influential writers in the English language (and in the world), many students don’t understand exactly how profound Shakespeare’s influence was on the development of the English language. Here’s some food for thought: Before Shakespeare’s time, written English was, on the whole, not standardized.

Feminist Interpretation Erin Furstnau Shakespeare’s plays open themselves up to a world of interpretation. Whether in discourse, historical context, symbolism, or intentions to leave the audience in conflict with themselves, there is no dispute about his plays lending themselves to every reader’s response. Enjoying "Macbeth" by William Shakespeare Enjoying "Macbeth", by William Shakespeare by Ed Friedlander, M.D.erf@kcumb.edu This Is NOT "Family Entertainment." Young people who know of Shakespeare from "Shakespeare Gardens" and "Beautiful Tales for Children" may be surprised by what happens in Macbeth. When we first hear of Macbeth, he has just cut an enemy open ("unseamed") from belly button ("nave") to throat ("chops"). The king shouts "Oh valiant cousin! Worthy gentleman!"

102 Resources for Fiction Writing « Here to Create UPDATE 1/10: Dead links removed, new links added, as well as Revision and Tools and Software sections. Are you still stuck for ideas for National Novel Writing Month? Or are you working on a novel at a more leisurely pace? Here are 102 resources on Character, Point of View, Dialogue, Plot, Conflict, Structure, Outlining, Setting, and World Building, plus some links to generate Ideas and Inspiration. Romeo: courtly lover Courtly lover and madman Commentary Table of Contents | Next page On this page: Introduction Partly because you will be thoroughly familiar with the main line of the plot of Romeo and Juliet, I am going to start my discussion of the play by beating about the bush: I will ask you to look at Romeo before he meets Juliet; at the brilliant but eccentric speech of Mercutio on Queen Mab; at Romeo and Juliet as tragedy; and at some of the many colourful minor characters in the play--then to look again at Romeo and Juliet themselves. Look with some care at the dialogue between Benvolio and Romeo, 1. 1. lines 163-241.

Romeo and Juliet Want more deets? We've also got a complete Online Course about Romeo and Juliet, with three weeks worth of readings and activities to make sure you know your stuff. Before young William Shakespeare wrote his play about two poetry speaking, hormone-driven teenagers who defy their families' long-standing feud and risk everything to be together, love wasn't even considered a suitable subject for a "tragedy." Not anymore. Written at the beginning of Shakespeare's career as a playwright, The Tragedy of Romeo and Juliet (c. 1595) is now considered to be the greatest love story of all time. It wasn't a sleeper hit, either: the play was so popular in its own time that it was published twice during Shakespeare's life (1597 and 1599).