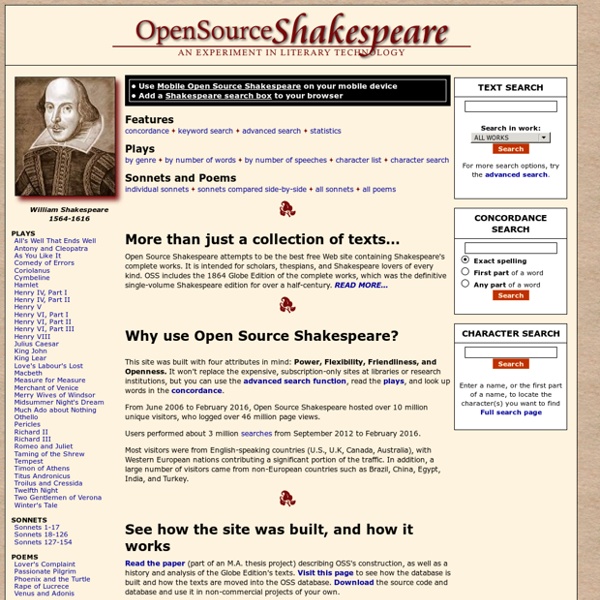 In Memory of W. B. Yeats Wystan Hugh Auden was born in York, England, on February 21, 1907. He moved to Birmingham during childhood and was educated at Christ Church, Oxford. As a young man he was influenced by the poetry of Thomas Hardy and Robert Frost, as well as William Blake, Emily Dickinson, Gerard Manley Hopkins, and Old English verse. At Oxford his precocity as a poet was immediately apparent, and he formed lifelong friendships with two fellow writers, Stephen Spender and Christopher Isherwood. Essential knowledge and literary terms for understanding Shakespeare. An Award winning You - you- your- your formal and distant form of address suggesting respect for a superior or courtesy to a social equal. Thou - thee - thy - thine informal and close form and can imply either closeness or contempt. Gertrude: Hamlet, thou hast thy father much offended. Hamlet: Mother, you have my father much offended.

15 Grammar Goofs That Make You Look Silly 15 Grammar Goofs That Make You Look Silly Engaging online wrting is informal, conversational, and fun, but certain goofy mistakes just make you look silly... and not in a good way. 1. Your / You're Your "Your is a possessive pronoun, as in "your car' or "your blog." ENGL 339 Home Page English 339: Introduction to ShakespeareFall, 2013 Site Navigation PREREQUISITES: GE area A (esp. expository writing, e.g. ENGL 134, and reasoning, argumentation and writing, e.g. ENGL 145); AND GE area C1 (a 200-level literature class, e.g. ENGL 230 or 231or 251 or 252 or 253).

Fabian Society Originally, the Fabian society was committed to the establishment of a socialist economy, alongside a commitment to British imperialism as a progressive and modernizing force.[3] Organisational history[edit] Establishment[edit] Enjoying "Macbeth" by William Shakespeare Enjoying "Macbeth", by William Shakespeare by Ed Friedlander, M.D.erf@kcumb.edu This Is NOT "Family Entertainment." Young people who know of Shakespeare from "Shakespeare Gardens" and "Beautiful Tales for Children" may be surprised by what happens in Macbeth.

Barnes & Noble Shakespeare - Understanding Shakespeare's Language - Barnes & Noble It is silly to pretend that it is easy to read Shakespeare. Reading Shakespeare isn’t like picking up a copy of USA Today or The New Yorker, or even F. Scott Fitzgerald’s Great Gatsby or Toni Morrison’s Beloved. It is hard work, because the language is often unfamiliar to us and because it is more concentrated than we are used to. In the theater it is usually a bit easier. Actors can clarify meanings with gestures and actions, allowing us to get the general sense of what is going on, if not every nuance of the language that is spoken.

The Differentiator Try Respondo! → ← Back to Byrdseed.com The Differentiator The Differentiator is based on Bloom's Taxonomy, Kaplan and Gould's Depth and Complexity, and David Chung's product menu. Romeo & Juliet Using this Guide List of other study guides The notes were prepared for use with an edition of Romeo and Juliet bound together with the book for West Side Story and in conjunction with a showing of Franco Zeffirelli's film version of the play, but they will be useful with any edition or production. The introduction focuses primarily on comparisons with West Side Story, so it has relatively little to say about the play as such. As noted, this is often regarded as a lesser Shakespeare tragedy by scholars, but what should also be kept in mind is that audiences have made it one of the most beloved plays of all time from the Elizabethan Age to the present.