Modern English Shakespeare Translations. English: The ultimate Shakespeare toolkit. Whether or not Shakespeare intended for his plays and sonnets to be studied in quite as much depth as they are in schools across the country, there’s no doubting that the themes within them are as compelling today as they were back then. 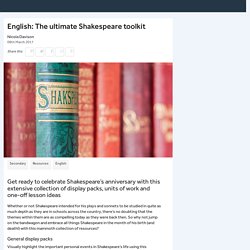 So why not jump on the bandwagon and embrace all things Shakespeare in the month of his birth (and death!) With this mammoth collection of resources? General display packs Visually highlight the important personal events in Shakespeare’s life using this well-designed infographic. Or, put them in the context of wider historical happenings with these comprehensive timeline cards*.

5 ways to teach Shakespeare in the classroom with technology - Impero Software. “Love is blind”, “Break the ice” and “Faint-hearted” – all phrases that were coined by the Bard himself. 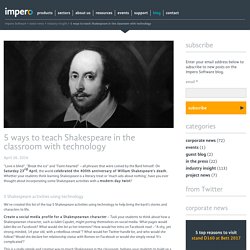 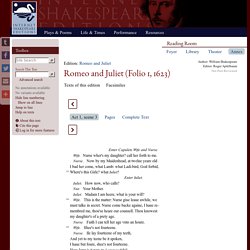 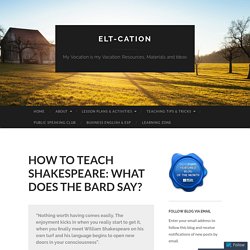 The enjoyment kicks in when you really start to get it, when you finally meet William Shakespeare on his own turf and his language begins to open new doors in your consciousness”.Joseph Smigelski Shakespeare shows us what effective language teaching should be. His works engage and keep our attention. They make us remember the message, and they have an impact on us for the rest of our life. There are many debates on whether Shakespeare’s poetry should be introduced in the classroom or shouldn’t, and if the answer is yes, whether we should introduce his plays and sonnets at an early stage, or when we teach more advanced learners, or whether we should focus on the message, or on the language, or both. “Our doubts are traitors, and make us lose the good we oft might win, by fearing to attempt”.

How can plays written in the 16th century be relevant to students today? “Go wisely and slowly. “For she had eyes and chose me”. Paparazzi Shakespeare: Ophelia’s Madness Revealed! Teaching Modules. The Hip Hop Shakespeare Company. Watch "Hip-Hop & Shakespeare?: Akala @ TEDxAldeburgh" Video at TEDxTalks. Shakespeare for teens. By being intimidated by the multilevel narrative and the stylised language we are missing out on some exceptional teaching materials. 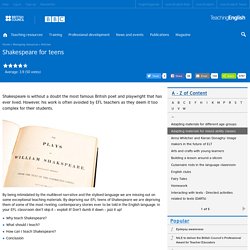 By depriving our EFL teens of Shakespeare we are depriving them of some of the most riveting, contemporary stories ever to be told in the English language. In your EFL classroom don’t skip it – exploit it! Don’t dumb it down – jazz it up! Why teach Shakespeare? What should I teach? Why teach Shakespeare? The fantastic stories.His plays are crammed with stimulating plots and sub-plots. What should I teach? Plays that motivate and excite youIf you know and love a play then you are already better equipped to sell it to your teenage audience.Plays on exam listsThe plays for 2008 are The Tempest, Richard III and Much Ado about Nothing. How can I teach Shakespeare? Emphasize the story firstThe story should always be the focal point of the lesson. How to make Shakespeare easy for English language learners.

Have you ever had difficulty relating Shakespeare to learners of English? 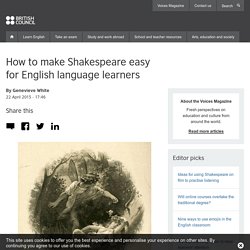 Tutor and resource writer Genevieve White comes to the rescue, in time for Shakespeare Day and English Language Day today. Last year, I wrote an article extolling the joys of teaching Shakespeare to learners of English and outlining the reasons why teachers should bring the Bard into the classroom. Some of the comments I received on this post suggested that the linguistic challenges presented by sixteenth-century English are just too great to overcome.

It is true that Shakespeare’s texts may present difficulties for contemporary readers, particularly those who do not have English as a first language. Luckily, however, there are a number of ways in which we can reduce the language barrier between our learners and Shakespeare’s greatest work. Make it attractive from the start Begin by piquing your learners’ interest. In the past, I have introduced my learners to the story and its characters with a trailer. 1. Drama - Shakespeare - Homepage. Startsida - UR.se. William Shakespeare.