Shakespeare's plays plus a modern translation you can understand 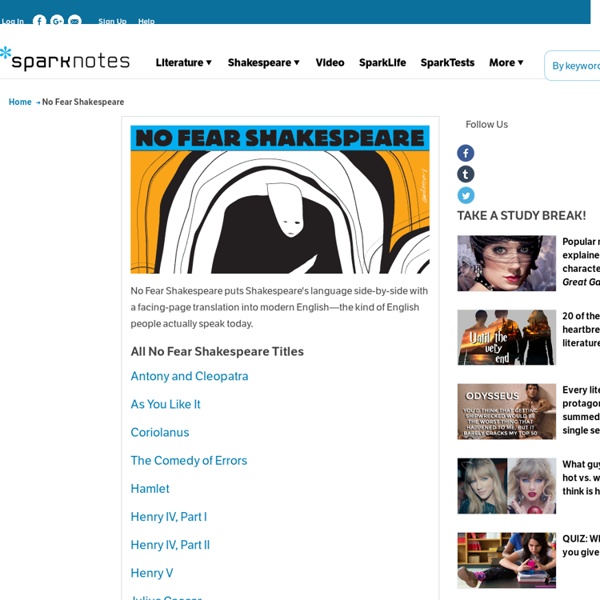 Funny English Idioms And Their Meanings Having recently moved to Brazil, learning a new language and also teaching English, has made me think more about the English language. Show Full Text When I stopped to think about some English idioms and their literal meaning, I found some of them very funny and thought it would be a nice idea to pick a few of the most common idioms and illustrate them. More info: rosha.ie As Cool As A Cucumber Thanks for sharing!

Crash Course - Literature Ophelia, Gertrude, and Regicide - Hamlet II: Crash Course Literature 204 Ghosts, Murder, and More Murder - Hamlet Part I: Crash Course Literature 203 Fate, Family, and Oedipus Rex: Crash Course Literature 202 A Long and Difficult Journey, or The Odyssey: Crash Course Literature 201 Before I Got My Eye Put Out - The Poetry of Emily Dickinson: Crash Course English Lit #8 Earth - Your life on earth Explore BBC Earth's unique interactive, personalised just to you. Find out how, since the date of your birth, your life has progressed; including how many times your heart has beaten, and how far you have travelled through space. Investigate how the world around you has changed since you've been alive; from the amount the sea has risen, and the tectonic plates have moved, to the number of earthquakes and volcanoes that have erupted. Grasp the impact we've had on the planet in your lifetime; from how much fuel and food we've used to the species we've discovered and endangered. And see how the BBC was there with you, capturing some of the most amazing wonders of the natural world. Explore, enjoy, and share with your friends either the whole page, or your favourite insights.

Words and Phrases Coined by Shakespeare Words and Phrases Coined by Shakespeare NOTE: This list (including some of the errors I originally made) is found in several other places online. That's fine, but I've asked that folks who want this on their own sites mention that I am the original compiler. How to Get Your Mind to Read In one experiment, third graders — some identified by a reading test as good readers, some as poor — were asked to read a passage about soccer. The poor readers who knew a lot about soccer were three times as likely to make accurate inferences about the passage as the good readers who didn’t know much about the game. That implies that students who score well on reading tests are those with broad knowledge; they usually know at least a little about the topics of the passages on the test. One experiment tested 11th graders’ general knowledge with questions from science (“pneumonia affects which part of the body?”)

4 Sites with LOTS Of Completely Free Ebooks That Don’t Suck If you’re a fervent reader and nerd like I am, you’ve probably encountered quite a lot of writing online. However, most of them are either absolute garbage or entirely illegal. It’s hard to find good, legal reads online – unless you know where to look. There are several sites that offer classic out-of-copyright writing, or publishes new e-books online as promotions. If you know where to look, you can feast on these completely free Ebooks for all the time you’ve got, and today is the day we’ll show you where to look. Planet eBook

Colorful Animation Visualizes 200 Years of Immigration to the U.S. (1820-Present) Many of us, whether born there, residing there, or just interested in the place, describe the United States of America as “a nation of immigrants.” What exactly that phrase means has in recent times become the subject of heated public debate. As this year’s presidential candidates strain to appeal to voters with a wide variety of views on the question of what role immigration should play in America’s future (to say nothing of what’s going on in Britain right now), it might help to look at what role immigration has played in its past, and a new animated infographic of who has immigrated from where since 1820 gives the clearest possible look at the whole picture.