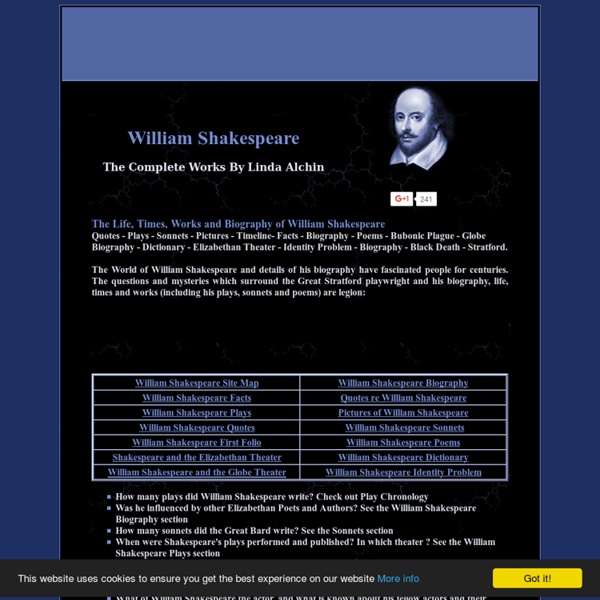 Full synopsis Romeo and Juliet was written in 1595-6 and is set in Verona, Italy, at a time when a longstanding feud between two noble families - the Montagues and the Capulets - constantly breaks out into brawling on the streets. Prince Escalus, ruler of Verona, threatens terrible punishment on anyone who takes part in further violence. Young Romeo Montague is hopelessly in love with the unattainable Rosaline and, in an attempt to cure his lovesick misery, his friends persuade him to go disguised to a party at the home of his family's sworn enemies, the Capulets. Romeo reluctantly agrees to go when he learns that Rosaline has been invited. At the party, he meets Juliet, only daughter of the Capulets, and not even knowing each other's names, they fall instantly in love.

William Shakespeare - Poet, Playwright William Shakespeare, often called the English national poet, is widely considered the greatest dramatist of all time. Synopsis William Shakespeare was baptized on April 26, 1564, in Stratford-upon-Avon, England. From roughly 1594 onward he was an important member of the Lord Chamberlain’s Men company of theatrical players. The Influence of the Renaissance in Shakespeare's Time By Lee Jamieson Updated April 04, 2016. It’s very easy to think of Shakespeare as a one-off genius with a unique perspective on the world around him.

Introductory Paragraphs Students are told from the first time they receive instruction in English composition that their introductory paragraphs should accomplish two tasks: They should get the reader's interest so that he or she will want to read more. They should let the reader know what the writing is going to be about. The second task can be accomplished by a carefully crafted thesis statement. Writing thesis statements can be learned rather quickly. Shakespeare's Globe Theatre at AbsoluteShakespeare.com The Globe Theatre also known as the Shakespeare Globe Theatre was not only one of most famous playhouse’s of all time, but the play house where Shakespeare performed many of his greatest plays. Built from oak, deal, and stolen playhouse frames, the 3 storey, 3000 capacity Globe Theatre, co-owned by William Shakespeare has become almost as famous as the playwright himself. History: Shakespeare needs a new playhouse to compete. The 1598 decision to build the famous playhouse came about as the answer to many of The Lord Chamberlain’s Men’s problems.

William Shakespeare Biography for Kids – To be or not to be « William Shakespeare was born in Stratford-upon-Avon, England on April 23, 1564. He most likely attended King Edward VI Grammar School in Stratford, where he learned Latin grammar and literature. In 1582, he married 26 year-old Anne Hathaway at the age of 18. In 1583, William’s first child, Susanna was born. In 1585, he had twins, Hamlet and Judith.

Lead - types By Dr. I. Arul Aram (arulram@yahoo.com) A lead (or an intro) is the beginning paragraph for a story. It is the hardest part to write as it sets the tone and introduces the reader to the rest of the story. Shakespeare's Coined Words Now Common Currency Jennifer Vernonfor National Geographic News April 22, 2004 While William Shakespeare died 388 years ago this week, the English playwright and poet lives on not only through his writings, but through the words and sayings attributed to him that still color the English language today.

Welcome to Shakespeare High: Your Shakespeare Classroom on the Internet! HIGH: used in composition with adjectives to heighten or emphasize their signification, as, high- fantastical HIGHT: called HILD: held HILDING: a paltry fellow HINT: suggestion HIREN: a prostitute. with a pun on the word 'iron.' HIT: to agree HOISE: to hoist, heave up on high HOIST: hoisted HOLP: to help; helped HOME: to the utmost HONEST: chaste HONESTY: chastity HONEY-STALKS: the red clover HOODMAN-BLIND: the game now called blindman's-buff HORN-MAD: probably, 'harn-mad,' that is, brain-mad HOROLOGE: a clock HOT-HOUSE: a brothel HOX: to hamstring HUGGER-MUGGER: secrecy HULL: to drift on the sea like a wrecked ship HUMOROUS: fitful, or, perhaps, hurried HUNT-COUNTER: to follow the scent the wrong way HUNTS-UP: a holla used in hunting when the game was on foot HURLY: noise, confusion HURTLE: to clash HURTLING: noise, confusion HUSBANDRY: frugality Management HUSWIFE: a jilt