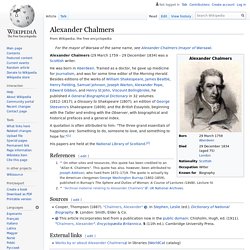 A quotation is often attributed to him: "The three grand essentials of happiness are: Something to do, someone to love, and something to hope for. "[1] His papers are held at the National Library of Scotland.[2] References[edit] Sources[edit] External links[edit] Works by or about Alexander Chalmers in libraries (WorldCat catalog) Giacomo Puccini. 19th and 20th-century Italian opera composer Giacomo Puccini in 1924 Giacomo Antonio Domenico Michele Secondo Maria Puccini ( puu-CHEE-nee, poo-, Italian: [ˈdʒaːkomo putˈtʃiːni]; 22 December 1858 – 29 November 1924) was an Italian opera composer who has been called "the greatest composer of Italian opera after Verdi". 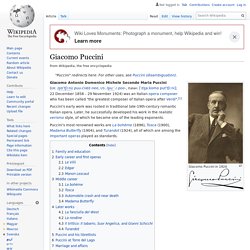 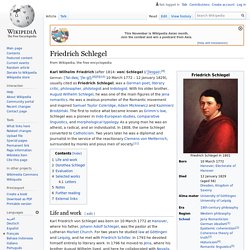 With his older brother, August Wilhelm Schlegel, he was one of the main figures of the Jena romantics. He was a zealous promoter of the Romantic movement and inspired Samuel Taylor Coleridge, Adam Mickiewicz and Kazimierz Brodziński. The first to notice what became known as Grimm's law, Schlegel was a pioneer in Indo-European studies, comparative linguistics, and morphological typology.

As a young man he was an atheist, a radical, and an individualist. In 1808, the same Schlegel converted to Catholicism. Edith Wharton. Edith Wharton (; born Edith Newbold Jones; January 24, 1862 – August 11, 1937) was an American novelist, short story writer, playwright, and designer. 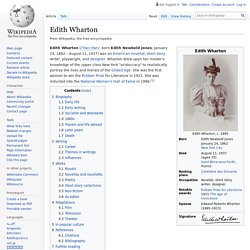 Wharton drew upon her insider's knowledge of the upper class New York "aristocracy" to realistically portray the lives and morals of the Gilded Age. She was the first woman to win the Pulitzer Prize for Literature in 1921. She was inducted into the National Women's Hall of Fame in 1996.[1] Girolamo Tiraboschi. Girolamo Tiraboschi S.J. 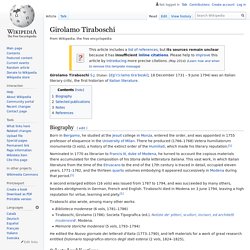 (Italian: [dʒiˈrɔːlamo tiraˈboski]; 18 December 1731 – 9 June 1794) was an Italian literary critic, the first historian of Italian literature. Biography[edit] Born in Bergamo, he studied at the Jesuit college in Monza, entered the order, and was appointed in 1755 professor of eloquence in the University of Milan. There he produced (1766–1768) Vetera humiliatorum monumenta (3 vols), a history of the extinct order of the Humiliati, which made his literary reputation. Nominated in 1770 as librarian to Francis III, duke of Modena, he turned to account the copious materials there accumulated for the composition of his Storia della letteratura italiana. A second enlarged edition (16 vols) was issued from 1787 to 1794, and was succeeded by many others, besides abridgments in German, French and English. 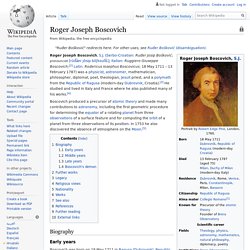 (Serbo-Croatian: Ruđer Josip Bošković; pronounced [rûd͡ʑer jǒsip bôʃkoʋit͡ɕ]; Italian: Ruggiero Giuseppe Boscovich;[2] Latin: Rodericus Iosephus Boscovicus; 18 May 1711 – 13 February 1787) was a physicist, astronomer, mathematician, philosopher, diplomat, poet, theologian, Jesuit priest, and a polymath from the Republic of Ragusa (modern-day Dubrovnik, Croatia).[3] He studied and lived in Italy and France where he also published many of his works.[4] Boscovich produced a precursor of atomic theory and made many contributions to astronomy, including the first geometric procedure for determining the equator of a rotating planet from three observations of a surface feature and for computing the orbit of a planet from three observations of its position.

In 1753 he also discovered the absence of atmosphere on the Moon.[5] Biography. Definition of Eppur Si Muove by Merriam-Webster. The Works of the English Poets. Plutarch. Plutarch (/ˈpluːtɑrk/; Greek: Πλούταρχος, Ploútarkhos, Koine Greek: [plǔːtarkʰos]; later named, on his becoming a Roman citizen, Lucius Mestrius Plutarchus (Λούκιος Μέστριος Πλούταρχος);[a] c. 46 – 120 AD),[1] was a Greek historian, biographer, and essayist, known primarily for his Parallel Lives and Moralia.[2] He is considered today to be a Middle Platonist. 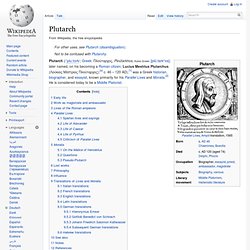 Early life[edit] Ruins of the Temple of Apollo at Delphi, where Plutarch served as one of the priests responsible for interpreting the predictions of the oracle. Plutarch was born to a prominent family in the small town of Chaeronea about twenty miles east of Delphi in the Greek region known as Boeotia. His family was wealthy. The name of Plutarch's father has not been preserved, but it was probably Nikarchus (Greek: Nίκαρχoς), from the common habit of Greek families to repeat a name in alternate generations. Plotinus. Biography[edit] Plotinus had an inherent distrust of materiality (an attitude common to Platonism), holding to the view that phenomena were a poor image or mimicry (mimesis) of something "higher and intelligible" [VI.I] which was the "truer part of genuine Being". 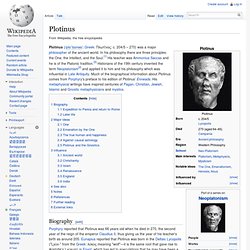 This distrust extended to the body, including his own; it is reported by Porphyry that at one point he refused to have his portrait painted, presumably for much the same reasons of dislike. Francis Bacon. English philosopher and statesman Francis Bacon, 1st Viscount St Alban,[a] Kt PC QC (;[5] 22 January 1561 – 9 April 1626), also known as Lord Verulam, was an English philosopher and statesman who served as Attorney General and as Lord Chancellor of England. 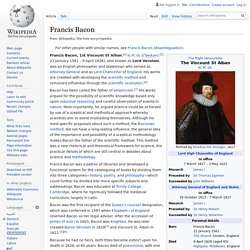 His works are credited with developing the scientific method and remained influential through the scientific revolution.[6] Francis Bacon was a patron of libraries and developed a functional system for the cataloguing of books by dividing them into three categories—history, poetry, and philosophy—which could further be divided into more specific subjects and subheadings. Bacon was educated at Trinity College, Cambridge, where he rigorously followed the medieval curriculum, largely in Latin. Johann Wolfgang von Goethe. 18th/19th-century German writer, artist, and politician A literary celebrity by the age of 25, Goethe was ennobled by the Duke of Saxe-Weimar, Karl August, in 1782 after taking up residence in Weimar in November 1775 following the success of his first novel, The Sorrows of Young Werther (1774). 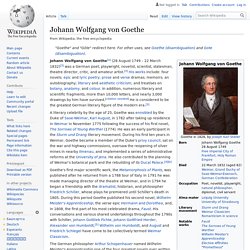 He was an early participant in the Sturm und Drang literary movement. Bettina von Arnim. 19th-century German writer Bettina von Arnim (the Countess of Arnim) (4 April 1785 – 20 January 1859),[1] born Elisabeth Catharina Ludovica Magdalena Brentano, was a German writer and novelist. Hamlet. Tragedy by William Shakespeare Hamlet is considered among the most powerful and influential works of world literature, with a story capable of "seemingly endless retelling and adaptation by others". It was one of Shakespeare's most popular works during his lifetime and still ranks among his most performed, topping the performance list of the Royal Shakespeare Company and its predecessors in Stratford-upon-Avon since 1879.

It has inspired many other writers—from Johann Wolfgang von Goethe and Charles Dickens to James Joyce and Iris Murdoch—and has been described as "the world's most filmed story after Cinderella". The story of Shakespeare's Hamlet was derived from the legend of Amleth, preserved by 13th-century chronicler Saxo Grammaticus in his Gesta Danorum, as subsequently retold by the 16th-century scholar François de Belleforest. Characters. Homer. Name ascribed by the ancient Greeks to the author of the Iliad and the Odyssey Homer (; Ancient Greek: Ὅμηρος Greek pronunciation: [hómɛːros], Hómēros) is the presumed author of the Iliad and the Odyssey, two epic poems that are the central works of ancient Greek literature. The Iliad is set during the Trojan War, the ten-year siege of the city of Troy by a coalition of Greek kingdoms. It focuses on a quarrel between King Agamemnon and the warrior Achilles lasting a few weeks during the last year of the war.

The Odyssey focuses on the ten-year journey home of Odysseus, king of Ithaca, after the fall of Troy. Dante Alighieri. Italian poet Durante di Alighiero degli Alighieri (Italian: [duˈrante deʎʎ aliˈɡjɛːri]; Latin: Dantes), commonly known by his pen name Dante Alighieri or simply as Dante (,[1][2] also ,[3] Italian: [ˈdante]; c. 1265 – 1321), was an Italian poet. His Divine Comedy, originally called Comedìa (modern Italian: Commedia) and later christened Divina by Giovanni Boccaccio, is widely considered the most important poem of the Middle Ages and the greatest literary work in the Italian language.[4][5] In the Late Middle Ages, most poetry was written in Latin, making it accessible only to the most educated readers.

William Shakespeare. William Shakespeare (/ˈʃeɪkspɪər/;[1] 26 April 1564 (baptised) – 23 April 1616)[nb 1] was an English poet, playwright, and actor, widely regarded as the greatest writer in the English language and the world's pre-eminent dramatist.[2] He is often called England's national poet, and the "Bard of Avon".[3][nb 2] His extant works, including collaborations, consist of approximately 38 plays,[nb 3] 154 sonnets, two long narrative poems, and a few other verses, some of uncertain authorship. His plays have been translated into every major living language and are performed more often than those of any other playwright.[4] Shakespeare produced most of his known work between 1589 and 1613.[6][nb 4] His early plays were primarily comedies and histories, which are regarded as some of the best work ever produced in these genres.

Many of his plays were published in editions of varying quality and accuracy during his lifetime. Life. John Milton. 17th-century English poet and civil servant John Milton (9 December 1608 – 8 November 1674) was an English poet and intellectual, who served as a civil servant for the Commonwealth of England under its Council of State and later under Oliver Cromwell. He wrote at a time of religious flux and political upheaval, and is best known for his epic poem Paradise Lost (1667), written in blank verse. Minerva. Thales of Miletus. Thales of Miletus (; Greek: Θαλῆς (ὁ Μιλήσιος), Thalēs, THAY-lees or TAH-lays; c. 624/623 – c. 548/545 BC) was a Greek mathematician, astronomer and pre-Socratic philosopher from Miletus in Ionia, Asia Minor. Anaximenes of Miletus.

Ancient Greek Pre-Socratic philosopher. Anaxagoras. Anaxagoras (; Greek: Ἀναξαγόρας, Anaxagoras, "lord of the assembly"; c. 510 – c. 428 BC) was a Pre-Socratic Greek philosopher. Born in Clazomenae at a time when Asia Minor was under the control of the Persian Empire, Anaxagoras came to Athens. Zoroaster. Jesus. The central figure of Christianity. Mencius. Napoleon. Imperial Standard of Napoleon I Napoléon Bonaparte (/nəˈpoʊliən, -ˈpoʊljən/;[2] French: [napɔleɔ̃ bɔnapaʁt], born Napoleone di Buonaparte; 15 August 1769 – 5 May 1821) was a French military and political leader who rose to prominence during the latter stages of the French Revolution and its associated wars.