Life in Elizabethan England 40: Children and Childhood. A little boy is dressed in skirts, pretty much like his sister. 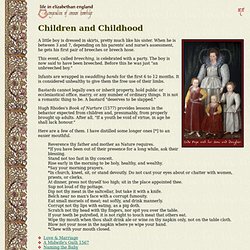 When he is between 3 and 7, depending on his parents' and nurse's assessment, he gets his first pair of breeches or breech hose. This event, called breeching, is celebrated with a party. The boy is now said to have been breeched. Before this he was just "an unbreeched boy. " Infants are wrapped in swaddling bands for the first 6 to 12 months. Bastards cannot legally own or inherit property, hold public or ecclesiastical office, marry, or any number of ordinary things. Hugh Rhodes's Book of Nurture (1577) provides lessons in the behavior expected from children and, presumably, from properly brought up adults. Here are a few of them.

Reverence thy father and mother as Nature requires. *If you have been out of their presence for a long while, ask their blessing. Stand not too fast in thy conceit. Rise early in the morning to be holy, healthy, and wealthy. *Say your morning prayers. *In church, kneel, sit, or stand devoutly. Renaissance Fashion - Women's Clothing in Elizabethan England. Women wore their hair long when young and unmarried, often adding headbands or circlets of fresh flowers. 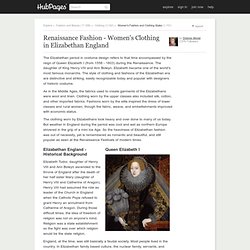 After marriage, women pinned up and covered their hair. Fashionable women added hair extensions, golden chains, pearls, or feathers int elaborately braided or twisted hair styles. A coif was a close fitting cap made of linen, sometimes referred to as a Mary Stuart cap (after Mary Queen of Scots) who wore one in a famous portrait. A Woman might wear a hat on top of a coif. Early Elizabethen women wore a French hood, a fabric bonnet shaped with wires, a style introduced to England by Elizabeth's mother, Ann Boleyn. The Attifet, similar to the French hood, dipped in the center to create a heart shape, often decorated with the addition of lace. A caul was an attractive hair net or snood, worn simply or festooned with decorations such as pearls or beads.

A kercher or kerchief, a triangular piece of muslin tied around the head and was worn under a hat. Women's Fashions of the Elizabethan Era. …An interpretation such as this goes some ways towards an explanation of those images of women, encrusted and embellished with the symbols of vanity, that form the staple evidence for a chronology of Elizabethan fashion. 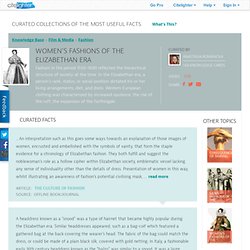 They both fulfill and suggest the noblewoman's role as a hollow cipher within Elizabethan society, emblematic vessel lacking any sense of individuality other than the details of dress. Presentation of women in this way, whilst illustrating an awareness of fashion's potential civilising mask, … read morenaturally left them open to familiar misogynistic accusation, as Honig states, 'Woman is the artificer, the trickster, the dealer in that which is superficial yet attractive.' [^] Save Citation to Project A headdress known as a "snood" was a type of hairnet that became highly popular during the Elizabethan era.

Similar headdresses appeared, such as a bag-coif which featured a gathered bag at the back covering the wearer's head. Women wore caps of various kinds. History Of Fashion - Elizabethan. The Elizabethan Era is the period associated with the reign of Queen Elizabeth I (1558-1603) and is often considered to be a golden age in English history. 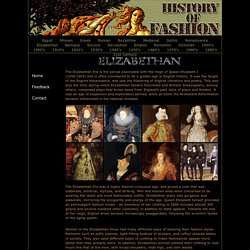 It was the height of the English Renaissance, and saw the flowering of English literature and poetry. This was also the time during which Elizabethan theatre flourished and William Shakespeare, among others, composed plays that broke away from England's past style of plays and theatre. It was an age of expansion and exploration abroad, while at home the Protestant Reformation became entrenched in the national mindset. The Elizabethan Era was a highly fashion-conscious age, and prized a look that was elaborate, artificial, stylized, and striking. Men and women alike were concerned to be wearing the latest and most fashionable outfits. Women in the Elizabethan times had many different ways of showing their fashion styles.