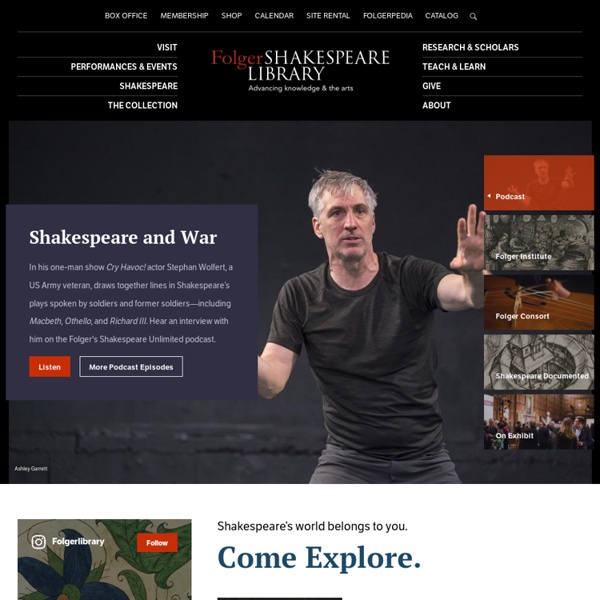 Barnes & Noble Shakespeare - Understanding Shakespeare's Language - Barnes & Noble It is silly to pretend that it is easy to read Shakespeare. Reading Shakespeare isn’t like picking up a copy of USA Today or The New Yorker, or even F. Scott Fitzgerald’s Great Gatsby or Toni Morrison’s Beloved. It is hard work, because the language is often unfamiliar to us and because it is more concentrated than we are used to. In the theater it is usually a bit easier. Actors can clarify meanings with gestures and actions, allowing us to get the general sense of what is going on, if not every nuance of the language that is spoken.

American Philosophical Society The entirety of the Franz Boas Papers is currently being digitized. This momentous project will provide unprecedented access to this large and important collection. The originals of the Franz Boas Papers will be closed to researchers beginning Sept. 17, 2012 and will remain closed until the end of 2014. Mysterious Engravings Question Authorship of Shakespeare’s Works Engraving from ‘Cryptomenytices et Cryptographiae libri IX’ (all images courtesy Bloomsbury Auctions) William Shakespeare was a commoner who wrote witty plays attended by Queen Elizabeth. Sir Francis Bacon was a noble who served as her Attorney General. Right? Well, if you’re a “Baconian,” someone who reveres Bacon as the true author of Shakespeare’s rhymes, then not exactly. Their basic hypothesis is that Bacon pulled a Cyrano de Bergerac, letting Shakespeare take credit for his plays so that he could pursue a political career.

Library Welcome to the Library of the Bank of Greece The Library is a Section of the Department "Centre for Culture, Research and Documentation of the Bank of Greece" and is housed in the Bank’s Head Office. As a special library focusing on economics and finance, its mission is to support the Bank in its research and other activities, while also making its resources available to the broader user community. Location and Opening hours: The Library is open to the public on working days from 09.00 to 13.30 and is located at the following address: Bank of Greece Centre for Culture, Research and Documentation Library Section El. Venizelos Ave., 3rd floor 10250 Athens

Young Shakespeare picture found - The Royal Secret Young Shakespeare picture found The recent claim that an illustration on the cover of an Elizabethan book of botany and herbalism is of a young 33 year old Shakepeare is to be given coverage in the UK’s prestigious Country Life magazine on 27th May next. As is so often the case with Shakespeare and his works the picture’s authenticity is in dispute. One learned Professor saying that the claim is apparently true from an interpretation of symbols on a plinth below the standing figure which show a spear. While another Professor states it proves only that it is “a man wearing a toga with a corn on the cob in his hand!”

Special Collections Baton Rouge, Louisiana | Thursday, April 24, 2014 Housed in historic Hill Memorial Library, the LSU Libraries’ Special Collections encompass a wide range of materials that may be used for research, education, and personal enjoyment. The library’s principle mission is to preserve the distinctive history and culture of Louisiana. Its collections of rare books, however, span virtually the entire range of human history, from the ancient world to the futuristic landscapes of science fiction writers. Natural history is another area of focus, with an emphasis on the great masterpieces of scientific illustration. Special Collections also houses University Archives, the official repository of the records of LSU which document the university’s development from a small military school to a major research institution.

world renowned collection of Shakespeare materials offers a number of online resources for teachers and students including a biography of William Shakespeare, introductions to each of the plays and poems, an extensive archive of lessons plans on the plays, and podcasts and videos about teaching and performing the plays. by nda_librarian Apr 30