Lucan. Pope Clement VII. Pope Clement VII (Italian: Papa Clemente VII; Latin: Clemens VII) (26 May 1478 – 25 September 1534), born Giulio di Giuliano de' Medici, was head of the Catholic Church and ruler of the Papal States from 19 November 1523 to his death on 25 September 1534.[3] “The most unfortunate of the Popes,” Clement VII’s reign was marked by a rapid succession of political, military, and religious struggles — many long in the making — which had far-reaching consequences for Christianity and world politics.[4] In contrast to his tortured Papacy, Clement VII was personally respectable and devout, possessing a “dignified propriety of character,” “great acquirements both theological and scientific,” as well as “extraordinary address and penetration — Clement VII, in serener times, might have administered the Papal power with high reputation and enviable prosperity. 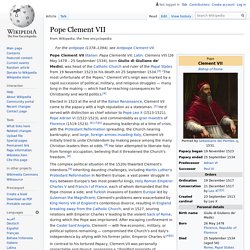 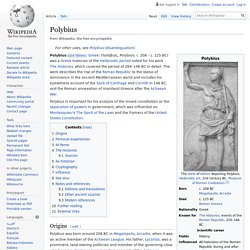 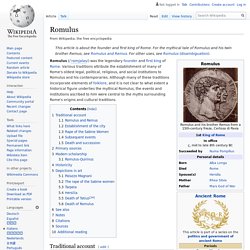 Various traditions attribute the establishment of many of Rome's oldest legal, political, religious, and social institutions to Romulus and his contemporaries. Although many of these traditions incorporate elements of folklore, and it is not clear to what extent a historical figure underlies the mythical Romulus, the events and institutions ascribed to him were central to the myths surrounding Rome's origins and cultural traditions. Sabines. The Sabines (; Latin: Sabini; Ancient Greek: Σαβῖνοι Sabĩnoi; Italian: Sabini, all exonyms) were an Italic people that lived in the central Apennine Mountains of ancient Italy, also inhabiting Latium north of the Anio before the founding of Rome. 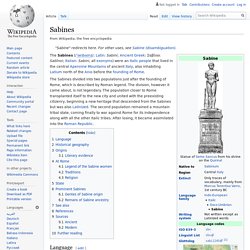 Language[edit] There is little record of the Sabine language; however, there are some glosses by ancient commentators, and one or two inscriptions have been tentatively identified as Sabine. There are also personal names in use on Latin inscriptions from the Sabine country, but these are given in Latin form. Robert Seymour Conway, in his Italic Dialects, gives approximately 100 words which vary from being well-attested as Sabine to being possibly of Sabine origin. Numa Pompilius. King of Rome Numa Pompilius (; 753–673 BC; reigned 715–673 BC) was the legendary second king of Rome,[1] succeeding Romulus. 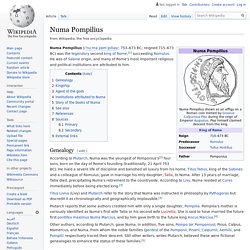 He was of Sabine origin, and many of Rome's most important religious and political institutions are attributed to him. Genealogy[edit] Titus Livius (Livy) and Plutarch refer to the story that Numa was instructed in philosophy by Pythagoras but discredit it as chronologically and geographically implausible.[3] Tullus Hostilius. Tullus Hostilius (r. 673–642 BC) was the legendary third king of Rome. 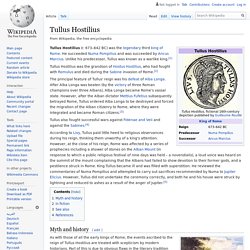 He succeeded Numa Pompilius and was succeeded by Ancus Marcius. Unlike his predecessor, Tullus was known as a warlike king.[1] Tullus Hostilius was the grandson of Hostus Hostilius, who had fought with Romulus and died during the Sabine invasion of Rome.[2] The principal feature of Tullus' reign was his defeat of Alba Longa. After Alba Longa was beaten (by the victory of three Roman champions over three Albans), Alba Longa became Rome's vassal state.

Tullus also fought successful wars against Fidenae and Veii and against the Sabines.[4] Ancus Marcius. First acts as King[edit] According to Livy, his first act as king was to order the Pontifex Maximus to copy the text concerning the performance of public ceremonies of religion from the commentaries of Numa Pompilius to be displayed to the public, so that the rites of religion should no longer be neglected or improperly performed.[4] War[edit] He waged war successfully against the Latins, and a number of them were settled on the Aventine Hill.[6] According to Livy the war was commenced by the Latins who anticipated Ancus would follow the pious pursuit of peace adopted by his grandfather, Numa Pompilius. 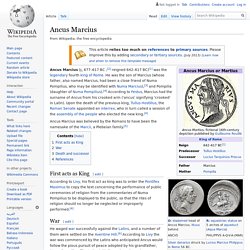 The Latins initially made an incursion on Roman lands. When a Roman embassy sought restitution for the damage, the Latins gave a contemptuous reply. Lucius Marcius Philippus. M.youtube. Seneca the Elder. Background[edit] Seneca the Elder is the first of the gens Annaea of whom there is definite knowledge.[1] His praenomen is uncertain. 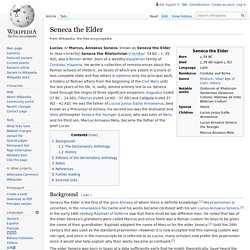 In the renaissance his name and his works became confused with his son Lucius Annaeus Seneca.[2] In the early 16th century Raphael of Volterra saw that there must be two different men. He noted that two of the elder Seneca's grandsons were called Marcus and since there was a Roman custom for boys to be given the name of their grandfather, Raphael adopted the name of Marcus for the elder Seneca.[2] Until the 20th century this was used as the standard praenomen. However it is now accepted that this naming custom was not rigid, and since in the manuscripts he is referred to as Lucius, many scholars now prefer this praenomen since it would also help explain why their works became so confused.[2] The elder Seneca was born in Spain at a date sufficiently early that he might, theoretically, have heard the voice of Cicero, had he been living in Italy as a boy. 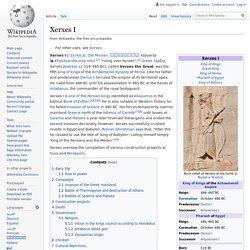 Like his father and predecessor Darius I, he ruled the empire at its territorial apex. Plutarch. Plutarch (/ˈpluːtɑrk/; Greek: Πλούταρχος, Ploútarkhos, Koine Greek: [plǔːtarkʰos]; later named, on his becoming a Roman citizen, Lucius Mestrius Plutarchus (Λούκιος Μέστριος Πλούταρχος);[a] c. 46 – 120 AD),[1] was a Greek historian, biographer, and essayist, known primarily for his Parallel Lives and Moralia.[2] He is considered today to be a Middle Platonist.

Early life[edit] Ruins of the Temple of Apollo at Delphi, where Plutarch served as one of the priests responsible for interpreting the predictions of the oracle. Plutarch was born to a prominent family in the small town of Chaeronea about twenty miles east of Delphi in the Greek region known as Boeotia. His family was wealthy. Second Catilinarian conspiracy. Composition of the conspiracy[edit] Promoting his policy of debt relief, Catiline initially also rallied many of the poor to his banner along with a large portion of Sulla’s veterans.[5] Debt had never been greater than in 63 BC since the previous decades of war had led to an era of economic downturn across the Italian countryside.[6] Numerous plebeian farmers lost their farms and were forced to move to the city, where they swelled the numbers of the urban poor.[7] Sulla's veterans were in bad economic straits as well. Desiring to regain their fortunes, they were prepared to march to war under the banner of the "next" Sulla.

Equites. The equites (; Latin: eques nom. singular; sometimes referred to as "knights" in modern times) constituted the second of the property-based classes of ancient Rome, ranking below the senatorial class. A member of the equestrian order was known as an eques. Description[edit] By the time of the Second Punic War (218–202 BC), all the members of the first class of commoners were required to serve as cavalrymen.

The presence of equites in the Roman cavalry diminished steadily in the period 200–88 BC as only equites could serve as the army's senior officers; as the number of legions proliferated fewer were available for ordinary cavalry service. After c. 88 BC, equites were no longer drafted into the legionary cavalry, although they remained technically liable to such service throughout the principate era (to AD 284). Cicero. 1st-century BC Roman lawyer, orator, philosopher and statesman Marcus Tullius Cicero[n 1] ( SISS-ə-roh, Classical Latin: [ˈmaːrkʊs ˈtʊllɪ.ʊs ˈkɪkɛroː]; 3 January 106 BC – 7 December 43 BC)[2] was a Roman statesman, orator, lawyer and philosopher, who served as consul in the year 63 BC.

He came from a wealthy municipal family of the Roman equestrian order, and is considered one of Rome's greatest orators and prose stylists.[3][4] His influence on the Latin language was immense: it has been said that subsequent prose was either a reaction against or a return to his style, not only in Latin but in European languages up to the 19th century.[5][6] Cicero introduced the Romans to the chief schools of Greek philosophy[citation needed]and created a Latin philosophical vocabulary (with neologisms such as evidentia,[7] humanitas, qualitas, quantitas, and essentia),[8] distinguishing himself as a translator and philosopher.

Personal life[edit] Rudolf I of Germany. Rudolf I, also known as Rudolf of Habsburg (German: Rudolf von Habsburg, Czech: Rudolf Habsburský), 1 May 1218 – 15 July 1291, was Count of Habsburg from about 1240 and the elected King of the Romans from 1273 until his death. Rudolf's election marked the end of the Great Interregnum in the Holy Roman Empire after the death of the Hohenstaufen emperor Frederick II in 1250. Originally a Swabian count, he was the first Habsburg to acquire the duchies of Austria and Styria in opposition to his mighty rival, the Přemyslid king Ottokar II of Bohemia, whom he defeated in the 1278 Battle on the Marchfeld. Frederick III, Holy Roman Emperor.

Frederick III (21 September 1415 – 19 August 1493) was Holy Roman Emperor from 1452 until his death. Della Rovere. The Della Rovere family (pronounced [della ˈroːvere]; literally "of the oak tree") was a noble family of Italy. It had humble origins in Savona, in Liguria, and acquired power and influence through nepotism and ambitious marriages arranged by two Della Rovere popes: Francesco Della Rovere, who ruled as Sixtus IV from 1471 to 1484) and his nephew Giuliano, who became Julius II in 1503.[1] Sixtus IV built the Sistine Chapel, which is named for him. Pope Julius II. Pope Julius II (Italian: Papa Giulio II; Latin: Iulius II) (5 December 1443 – 21 February 1513), born Giuliano della Rovere, was head of the Roman Catholic Church and ruler of the Papal States from 1503 to 1513.