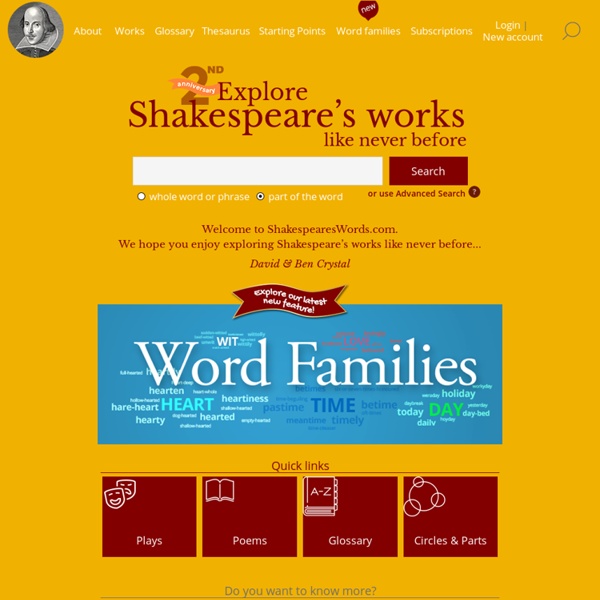 William Shakespeare Enter Kent, Gloucester, and Edmund I thought the King had more affected the Duke of Albany than Cornwall. It did always seem so to us. Romeo and Juliet No Fear Shakespeare puts Shakespeare's language side-by-side with a facing-page translation into modern English—the kind of English people actually speak today. Table of Contents Characters Prologue Prologue

The Modern Word - Martha Kinney's "The Fall of the Heartless Horse" The Fall of the Heartless Horse Martha Kinney Akashic Books, 2004, ISBN 1888451734, 170 Pages, Paperback $11.95. [Browse/Purchase] A Book Review & Discussion with Dennis Cooper By Justin Taylor We know why authors like the books they’ve written. They’ve written them, for one thing, and will (in a certain sense) sink or swim based on their success.

William Shakespeare X and Y both use thou X and Y both use you X uses thou, Y uses you, showing different status X and Y switch from you to thou, as a sign of deteriorating relationships X uses thou and then you, marking a change of attitude How to make Shakespeare easy for English language learners Have you ever had difficulty relating Shakespeare to learners of English? Tutor and resource writer Genevieve White comes to the rescue, in time for Shakespeare Day and English Language Day today. Last year, I wrote an article extolling the joys of teaching Shakespeare to learners of English and outlining the reasons why teachers should bring the Bard into the classroom. Some of the comments I received on this post suggested that the linguistic challenges presented by sixteenth-century English are just too great to overcome. It is true that Shakespeare’s texts may present difficulties for contemporary readers, particularly those who do not have English as a first language. Luckily, however, there are a number of ways in which we can reduce the language barrier between our learners and Shakespeare’s greatest work.

Words Shakespeare Invented Words Shakespeare Invented The English language owes a great debt to Shakespeare. He invented over 1700 of our common words by changing nouns into verbs, changing verbs into adjectives, connecting words never before used together, adding prefixes and suffixes, and devising words wholly original. Below is a list of a few of the words Shakespeare coined, hyperlinked to the play and scene from which it comes. When the word appears in multiple plays, the link will take you to the play in which it first appears. For a more in-depth look at Shakespeare's coined words, please click here. Shakespeare's Sonnets All the sonnets are provided here, with descriptive commentary attached to each one, giving explanations of difficult and unfamiliar words and phrases, and with a full analysis of any special problems of interpretation which arise. Sonnets by other Elizabethan poets are also included, Spenser, Sidney, Drayton and a few other minor authors. The poems of Sir Thomas Wyatt are also given, with both old and modern spelling versions, and with brief notes provided.

Sonnet 41 The first two lines of Sonnet 41 in the 1609 Quarto. Those pretty wrongs that liberty commits, When I am sometime absent from thy heart, Thy beauty, and thy years full well befits, For still temptation follows where thou art. Gentle thou art, and therefore to be won, Beauteous thou art, therefore to be assail'd; And when a woman woos, what woman's son Will sourly leave her till he have prevail'd?