Institute for Ethics and Emerging Technologies 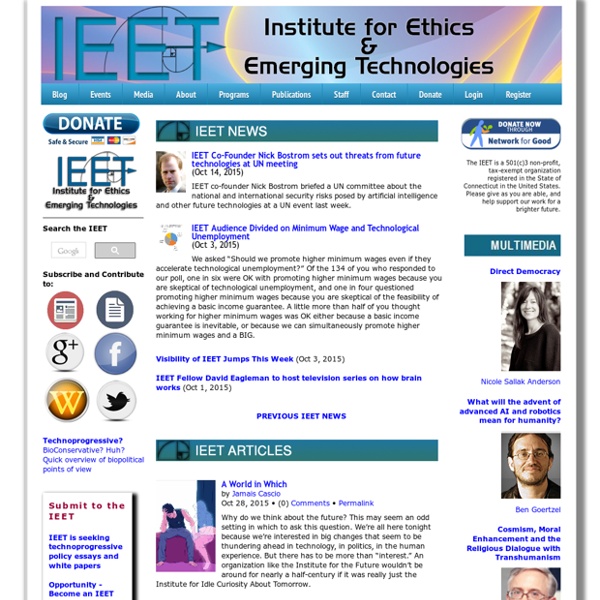 Foundational Questions Institute The Foundational Questions Institute (FQXi) To catalyze, support, and disseminate research on questions at the foundations of physics and cosmology, particularly new frontiers and innovative ideas integral to a deep understanding of reality but unlikely to be supported by conventional funding sources. FQXi has five goals: {*style:<ul style="padding-left:20px;"><li> To expand the purview of scientific inquiry to include scientific disciplines fundamental to a deep understanding of reality, but which are currently largely unsupported by conventional grant sources To redress incrementalism in research programming by establishing or expanding new "islands" of understanding via flexible funding of high-risk, high-reward research in these areas

The World in 2030: Four scenarios for long-term planning and strategy By Ross Dawson Recently I did the opening keynote to the top executive team of a major organization at their strategy offsite. It’s not appropriate to share the full presentation, however I can share the rough scenarios I presented for the world to 2030. The scenarios were presented after having examined the driving forces and critical uncertainties for the company. Moore's law Moore's law is the observation that, over the history of computing hardware, the number of transistors on integrated circuits doubles approximately every two years. The law is named after Intel co-founder Gordon E. Moore, who described the trend in his 1965 paper.[1][2][3] His prediction has proven to be accurate, in part because the law is now used in the semiconductor industry to guide long-term planning and to set targets for research and development.[4] The capabilities of many digital electronic devices are strongly linked to Moore's law: processing speed, memory capacity, sensors and even the number and size of pixels in digital cameras.[5] All of these are improving at roughly exponential rates as well. This exponential improvement has dramatically enhanced the impact of digital electronics in nearly every segment of the world economy.[6] Moore's law describes a driving force of technological and social change in the late 20th and early 21st centuries.[7][8]

IEET African Futures Project The IEET’s African Futures Project was started in 2012 as a multifaceted program to develop our understanding of how emerging technologies, combined with human rights and democratic empowerment, are transforming Africa, the poorest region of the world. The project started with two separate initiatives, the first an accumulation of the intellectual thoughts and dreams of academic scholars and policy leaders, and the second a program aimed to empower ordinary Africans by putting communication devices in their hands. In 2013, the IEET is relaunching the African Futures Project, and building on these established initiatives to support a revisioned mission for the project that focuses on the former goal of sustainable development for Africa. The IEET will start towards this mission by expanding the two current projects, Fone4U and the African Futures Essay Collective.

The Emergence of Collective Intelligence ~Aristotle When we observe large schools of fish swimming, we might wonder who is choreographing that complex and sophisticated dance, in which thousands of individuals move in harmony as if they knew exactly what to do to produce the collective spectacle. So, what is “Emergence”?

Start Page - The Faculty of Science, University of Gothenburg, Sweden The Faculty of Science The Faculty of Science includes all the major subject areas in the fields of mathematics and natural sciences. With 6 500 students and 730 employees it is the second largest Faculty at the University of Gothenburg. ACE The goal of the ACE Program is to dramatically enhance the accuracy, precision, and timeliness of intelligence forecasts for a broad range of event types, through the development of advanced techniques that elicit, weight, and combine the judgments of many intelligence analysts. The ACE Program seeks technical innovations in the following areas: (a) efficient elicitation of probabilistic judgments, including conditional probabilities for contingent events; (b) mathematical aggregation of judgments by many individuals, based on factors that may include: past performance, expertise, cognitive style, metaknowledge, and other attributes predictive of accuracy; and (c) effective representation of aggregated probabilistic forecasts and their distributions. The ACE Program will build upon technical achievements of past research and on state-of-the-art systems used today for generating probabilistic forecasts from widely-dispersed experts.

Technological Singularity The technological singularity is the hypothesis that accelerating progress in technologies will cause a runaway effect wherein artificial intelligence will exceed human intellectual capacity and control, thus radically changing civilization in an event called the singularity.[1] Because the capabilities of such an intelligence may be impossible for a human to comprehend, the technological singularity is an occurrence beyond which events may become unpredictable, unfavorable, or even unfathomable.[2] The first use of the term "singularity" in this context was by mathematician John von Neumann. Proponents of the singularity typically postulate an "intelligence explosion",[5][6] where superintelligences design successive generations of increasingly powerful minds, that might occur very quickly and might not stop until the agent's cognitive abilities greatly surpass that of any human.

Chaos theory A double rod pendulum animation showing chaotic behavior. Starting the pendulum from a slightly different initial condition would result in a completely different trajectory. The double rod pendulum is one of the simplest dynamical systems that has chaotic solutions. Top Sites That Make Science Awesome posted by Elizabeth Harper on April 24, 2013 in Internet & Networking, Computers and Software, Family and Parenting, Kids, Guides & Reviews, Fab Websites :: 0 comments Though you may remember science class as dull, much has changed. The Internet has done the impossible and made science a lot more accessible, bringing scientists and science enthusiasts together to share and discuss the most interesting discoveries of the day. Online, you can find fascinating science news and explanations on YouTube, Facebook, Twitter and more if you know where to look—and it's all a lot more interesting than any high school science textbook. Here's the best of what's out there.

How to Stop Absorbing Other People’s Emotions Emotions such as fear, anger, frustration, and immobility are energies. And you can potentially ‘catch’ these energies from people without realizing it. If you tend to be an emotional sponge, it’s vital to know how to avoid taking on an individual’s negative emotions, or even how to deflect the free-floating negativities in crowds. Another twist is that chronic anxiety, depression, or stress can turn you into an emotional sponge by wearing down your defenses. Suddenly, you become hyper-attuned to others, especially suffering with similar pain. That’s how empathy works; we zero in on hot-button issues that are unresolved in ourselves.