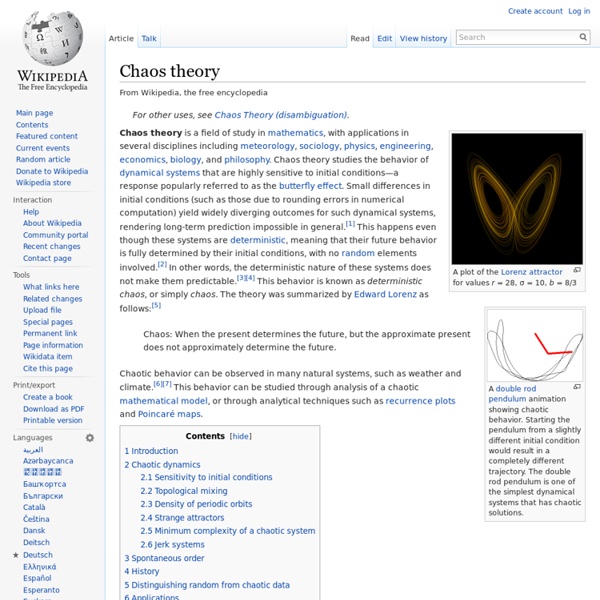 A double rod pendulum animation showing chaotic behavior. Starting the pendulum from a slightly different initial condition would result in a completely different trajectory. The double rod pendulum is one of the simplest dynamical systems that has chaotic solutions. Chaos: When the present determines the future, but the approximate present does not approximately determine the future. Chaotic behavior can be observed in many natural systems, such as weather and climate.[6][7] This behavior can be studied through analysis of a chaotic mathematical model, or through analytical techniques such as recurrence plots and Poincaré maps. Introduction[edit] Chaos theory concerns deterministic systems whose behavior can in principle be predicted. Chaotic dynamics[edit] The map defined by x → 4 x (1 – x) and y → x + y mod 1 displays sensitivity to initial conditions. In common usage, "chaos" means "a state of disorder".[9] However, in chaos theory, the term is defined more precisely. where , and , is: .

The Royal Institution Create a wine glass orchestra in your kitchen and explore how sound is caused by vibrations. For more ideas, and to download an info sheet click here: Marieke and Tilly experiment with making music and doing science experiments at home. Using wine glasses filled with different volumes of liquids, they investigate how sounds are caused by vibrations and how changing the volume of liquid affects the pitch of the note. Simply rubbing your fingers around the rim of a glass can make an amazing noise. Freedom Liberty, in philosophy, involves free will as contrasted with determinism.[1] In politics, liberty consists of the social and political freedoms to which all community members are entitled.[2] In theology, liberty is freedom from the effects of, "sin, spiritual servitude, [or] worldly ties."[3] Generally, liberty is distinctly differentiated from freedom in that freedom is primarily, if not exclusively, the ability to do as one wills and what one has the power to do; whereas liberty concerns the absence of arbitrary restraints and takes into account the rights of all involved. As such, the exercise of liberty is subject to capability and limited by the rights of others.[4]

Autopoiesis 3D representation of a living cell during the process of mitosis, example of an autopoietic system. The original definition can be found in Autopoiesis and Cognition: the Realization of the Living (1st edition 1973, 2nd 1980): Page 78: - An autopoietic machine is a machine organized (defined as a unity) as a network of processes of production (transformation and destruction) of components which: (i) through their interactions and transformations continuously regenerate and realize the network of processes (relations) that produced them; and (ii) constitute it (the machine) as a concrete unity in space in which they (the components) exist by specifying the topological domain of its realization as such a network. [1] Page 89:- [...] the space defined by an autopoietic system is self-contained and cannot be described by using dimensions that define another space.

What is chaos theory Chaos theory is the study of nonlinear dynamics, in which seemingly random events are actually predictable from simple deterministic equations. In a scientific context, the word chaos has a slightly different meaning than it does in its general usage as a state of confusion, lacking any order. Chaos, with reference to chaos theory, refers to an apparent lack of order in a system that nevertheless obeys particular laws or rules; this understanding of chaos is synonymous with dynamical instability, a condition discovered by the physicist Henri Poincare in the early 20th century that refers to an inherent lack of predictability in some physical systems. The two main components of chaos theory are the ideas that systems - no matter how complex they may be - rely upon an underlying order, and that very simple or small systems and events can cause very complex behaviors or events.

Technological Singularity The technological singularity is the hypothesis that accelerating progress in technologies will cause a runaway effect wherein artificial intelligence will exceed human intellectual capacity and control, thus radically changing civilization in an event called the singularity.[1] Because the capabilities of such an intelligence may be impossible for a human to comprehend, the technological singularity is an occurrence beyond which events may become unpredictable, unfavorable, or even unfathomable.[2] The first use of the term "singularity" in this context was by mathematician John von Neumann. Proponents of the singularity typically postulate an "intelligence explosion",[5][6] where superintelligences design successive generations of increasingly powerful minds, that might occur very quickly and might not stop until the agent's cognitive abilities greatly surpass that of any human. Basic concepts

Butterfly effect In chaos theory, the butterfly effect is the sensitive dependency on initial conditions in which a small change at one place in a deterministic nonlinear system can result in large differences in a later state. The name of the effect, coined by Edward Lorenz, is derived from the theoretical example of a hurricane's formation being contingent on whether or not a distant butterfly had flapped its wings several weeks earlier. Although the butterfly effect may appear to be an unlikely behavior, it is exhibited by very simple systems. For example, a ball placed at the crest of a hill may roll into any surrounding valley depending on, among other things, slight differences in its initial position.